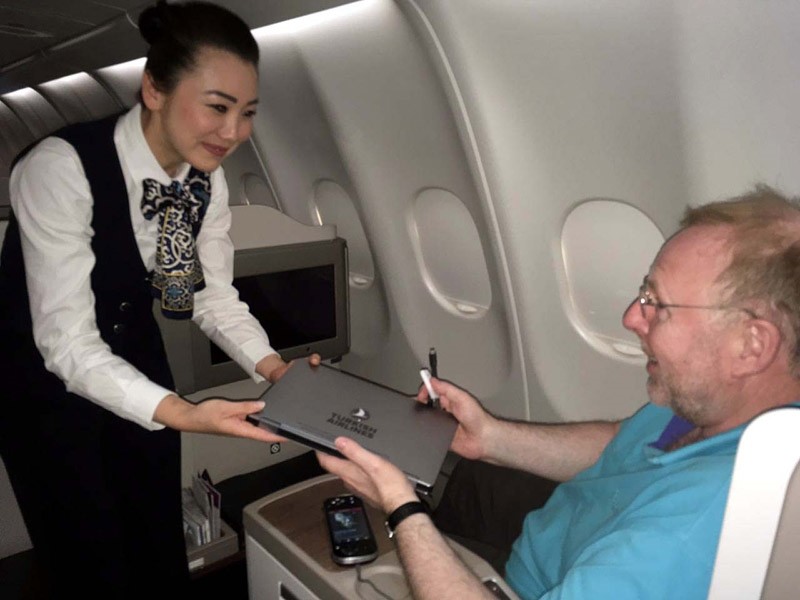 Following a ban on electronic devices on direct flights from Istanbul Atatürk Airport to the U.S. and U.K., national flag carrier Turkish Airlines (THY) has started offering laptops to its business-class travelers on all U.K. flights starting Friday.

According to reports, the first laptops were given out to business class passengers aboard an Istanbul-Manchester scheduled flight Friday morning.

Business class passengers who handed over their personal computers to THY personnel beforehand will be able to request a laptop from the cabin crew for in-flight usage.

Personal data will be protected

The laptops, which feature a folding tablet and touchscreen, will be offered with a security system that protects passengers' personal information. After the use, passengers will be able to copy their data to an external storage unit (USB) if they wish and all the personal work of the passenger will automatically be deleted when the computer is shutdown.

Previously, a similar application was launched on May 6 in all U.S. flights departing from Istanbul's Atatürk Airport.

Meanwhile, officials said on Wednesday that the Trump administration was likely to expand the electronics ban onboard commercial aircraft may include some European countries too. It is also reviewing to ensure lithium batteries, stored in luggage holds, do not explode midair.

Any expansion of the ban could impact U.S. carriers such as United Airlines, Delta Air Lines Inc., and American Airlines Group. Six U.S. and European officials said they expect the U.S. Department of Homeland Security (DHS) to make an announcement, but declined to say when.

In March, the U.S. announced a laptop restrictions on flights originating from 10 airports including the UAE, Saudi Arabia, Qatar, and Turkey because of fears that concealed bomb could be installed inside electronic devices taken aboard the aircraft.

Britain quickly followed suit with restrictions on a slightly different set of routes. One European official acknowledged that the expanded ban may also affect flights to the U.S. from Britain.