Baku-Tbilisi-Kars Railway to be operational by end of June 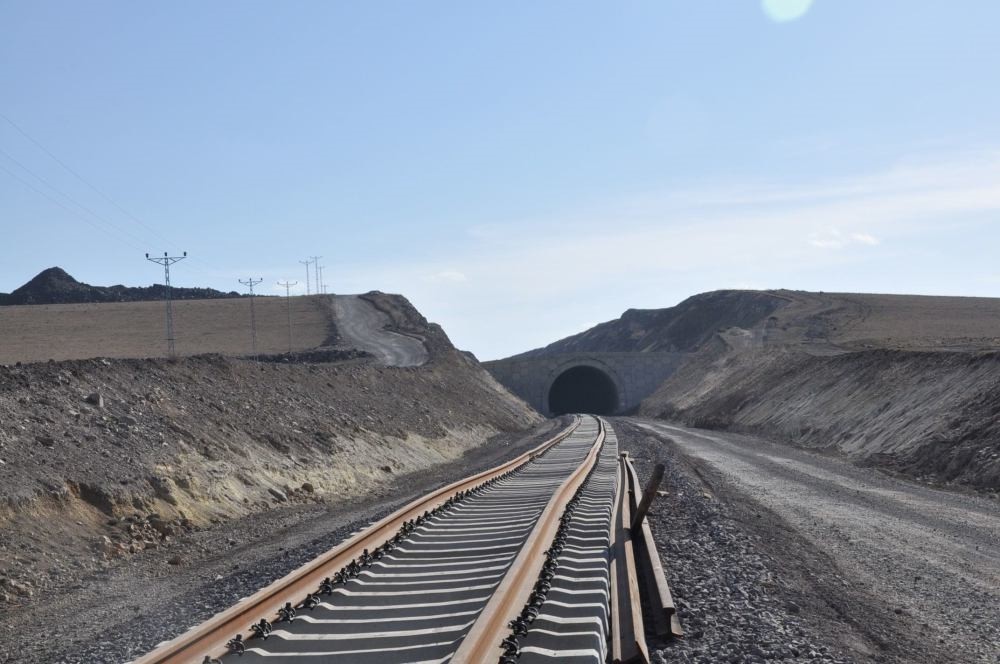 Baku-Tiflis-Kars Railway Project will be completed by the end of June and put into service in a ceremony attended by the leaders of Turkey, Azerbaijan and Georgia
by Daily Sabah with AA May 23, 2017 12:00 am

The Baku-Tbilisi-Kars Railway, an important ring in the middle corridor of the modern Silk Road, will be operational by the end of June, increasing the connectivity among the regional countries

Transport, Maritime Affairs and Communications Minister Ahmet Arslan announced that the Baku-Tbilisi-Kars Railway (BTK) Project will be completed and put into service by the end of June. Noting that this project will be launched with the participation of the heads of state and the presidents of the three countries, Arslan said the project is very important for Turkey, Georgia and Azerbaijan and a very significant part of the middle corridor of the Modern Silk Road.

Referring to the significance of the project, Arslan said its purpose is to ensure the transport of the freight movements in China, Asia and Central Asia to Europe, while bringing all of the corridor's countries in line with the project. Stressing the importance of the link between the middle corridor and the BTK Railway, Arslan noted that everyone has agreed and emphasized that the BTK Railway will make significant contributions to the trade route by shortening the load-carrying duration. He also added that transportation will be more economical with the new lines, suggesting that Turkey is very interested in the middle corridor and wants to take advantage of it.

"We have attached great importance to linking the divided roads, railways and airports, which are complementary to the central corridor, to the sea ports in order to facilitate the freight movement of the countries in this area. We have been conducting many projects for this, led by the BTK Railway Project, which will complete the missing link between the European and Asian transport corridors," Arslan said, highlighting that with the Marmaray Project, Asia and Europe were linked by an underwater railway to Kars. Arslan also stated that with the BTK Railway Project, the cargo coming into Kars will reach Baku via Georgia, Tbilisi, then through Kazakhstan's Aktau Port to Turkmenistan's Turkmenbashi Port on its way to China in the north through the middle corridor.

Indicating that the completion of the middle corridor in Turkey is also on the agenda of other countries, Minister Arslan said the OBOR Forum in China showed one northern corridor going through Russia, as well as southern corridors, including the sea connection from the south of the Caspian to the south of Iran. Arslan suggested that compared to these, shortening the corridor through Turkey is a huge advantage, and that they consider all these projects important because the BTK Railway Project constitutes an important ring in the central corridor.

"While commissioning these projects, we are improving the comfort of our citizens and making their access easier. We are facilitating transport by increasing the freight volume within the country, therefore providing economic input," he said.

Arslan pointed out that the BTK Railway Project is also very important internationally, adding that since the overseas transports will be conducted door-to-door in a shorter period with the BTK Railway Project, the middle corridor is of great importance for both Turkey and all the countries on the route between Asia and Europe in the east-west axis.

He said these countries are so aware of the importance of this issue that Turkey's completion of the middle corridor is the first topic on the agenda during international talks and meetings with counterparts or higher-level counterparts on any platform. "It is very important regarding the middle corridor that we are conducting the BTK Railway Project, which is one of its rings, and the divided roads in the east-west axis," Arslan said, adding that the middle corridor will shorten the load carrying duration, making it much easier and much more economical. "Since the duration will be much shorter compared to the other corridors with which we compete, it has an extraordinary advantage. So, everyone will prefer this," Arslan added.

The BTK railway has come to the fore as a critical project at the western end of the Silk Road. Similar transportation projects also reinforce Turkey's economic and political ties with other Eurasian countries.

In an effort to offer more efficient approaches to transportation and trade between China and the European Union, China identified three land routes and a maritime route within the framework of the OBOR initiative. One of the three land routes, the middle corridor, passes through Kazakhstan, Azerbaijan, Georgia and Turkey.