Plan for new high-speed rail in Istanbul waiting for approval 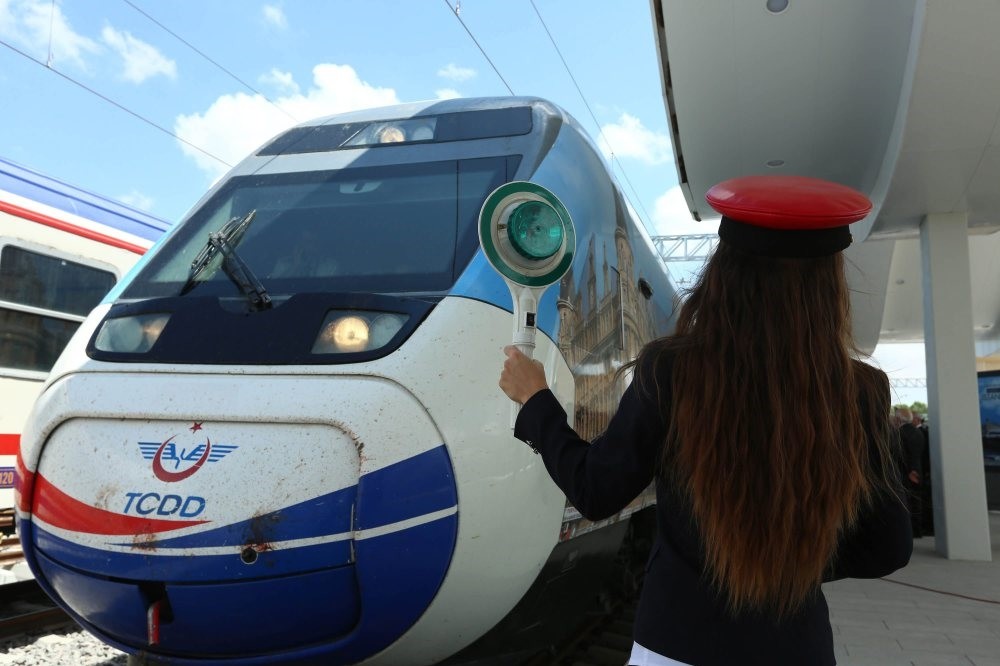 The Ankara-Istanbul High-Speed Rail line was constructed Turkish-Chinese partnership and became operaitonal in July 2014.
by daily sabah Jun 07, 2017 12:00 am

The latest high-speed rail line will connect the Yavuz Sultan Selim Bridge to Istanbul New Airport. It will ease traffic congestion and boost connectivity between Asia and Europe, a priority for the Silk Road project

As Turkey continues to invest heavily in transportation projects to increase connectivity and ease traffic congestion, there is now a plan for a new high-speed railway (HSR) project in Istanbul, which will include the route between Gebze-Sabiha Gökçen Airport, Yavuz Sultan Selim Bridge and Istanbul's new airport route. The proposed plan envisions high connectivity between the Yavuz Sultan Selim Bridge and the new airport and has been submitted to the Higher Planning Council (YPK). The latest HSR line is projected to be 124-kilometers long and will support the rail traffic between Asia and Europe.

The Halkalı-Kapıkule High Speed Rail is expected to reduce time on the Istanbul-Edirne route to one hour, which normally takes three hours by road. This project is devised as two parts: A 150-kilometer long Çerkezköy-Kapıkule line and an 80 kilometer Halkalı-Çerkezköy line.

This line linking the Yavuz Sultan Selim Bridge to the new airport will continue on to the Halkalı railway station then to Bulgaria, where goods can travel without any customs restrictions according to the EU-Turkey Customs Union Agreement that came into force in 1996. It will also be updated soon as Turkey and the EU will negotiate expanding the scope of the agreement on June 13.

The route of the high-speed rail line, which includes the Yavuz Sultan Selim Bridge and the Istanbul New Airport.

The Transport, Maritime Affairs and Communications Ministry has been working to expand Turkey's HSR network. To this end, one of the projects the government has included in the investment program is the Ankara-Sivas HSR project, which will be completed by the end of 2018. This project will reduce the distance of the Ankara-Sivas route to 405 kilometers. So far, 75 percent of the project has been completed.

The preliminary qualification contracting for the Sivas-Zara route, which is the first phase of Sivas-Erzincan HSR line of 245 kilometers, was also held. This HSR line is planned to be operational by 2021. Project building and the contracting preparation processes for the other sections of the route are ongoing. A project preparation contract for the 414-kilometer long Erzincan-Erzurum-Kars HSR line will open this year.

The Ankara-Sivas HSR line is a very significant element of the rail corridor that connects Asia Minor to the Asian countries located on the Belt and Road Initiative, which was launched by Chinese President Xi Jinping with the aim of increase connectivity among the countries of the New Silk Road in order to increase the economic gains that could be secured as a result of increased trade. This rail line will integrate the Baku-Tbilisi-Kars railway project, which will be operational this summer, with the Sivas-Erzincan and Erzincan-Erzurum-Kars HSR lines.

Regarding ongoing HSR projects, two of them, the Ankara-İzmir HSR and the Bursa-Bilecik HSR, are projected to be operational in 2019. Moreover, the HSR projects along Turkey's southern corridor are in the planning process. The project preparation and infrastructure work for the Mersin-Adana-Osmaniye-Kahramanmaraş-Gaziantep rail line is also ongoing.

State Railways of the Republic of Turkey (TCDD) began to build HSRs in 2003. The first section of the line, between Ankara and Eskişehir, was inaugurated on March 13, 2009. It is a part of the 533-kilometer Istanbul-Ankara HSR line, which was completed with Turkish-Chinese partnership.

The China Railway Construction Corporation and the China National Machinery Import and Export Corporation won the bid in 2005 to build the railway line in partnership with two Turkish companies, Cengiz Construction and İbrahim Çeçen İçtas Construction. The project was financed in part by a $720 million loan granted by Chinese Exim Bank. This successful Turkish-Chinese partnership reinvigorated confidence for further collaboration between the two countries located on the opposite ends of the ancient Silk Road. In January 2010, the Halkalı-Kapıkule-Ankara-Sivas-Kars Railway linking Bulgaria and Georgia through Turkey was defined as a priority project of European interest.