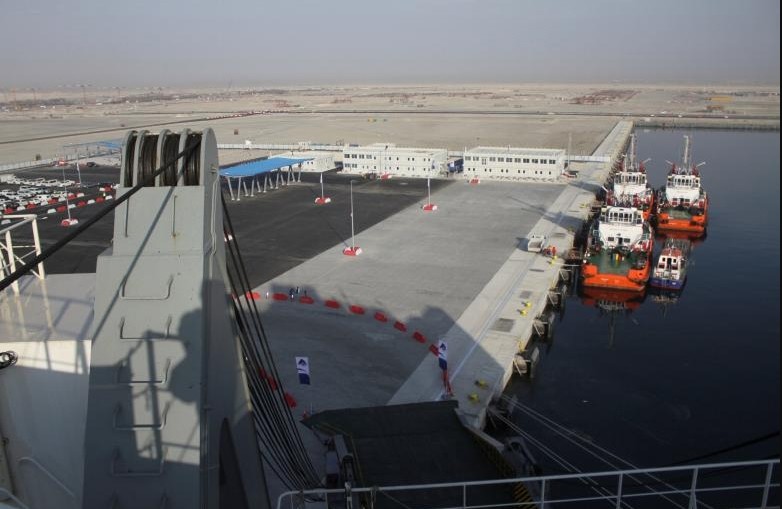 General view of Hamad Port during a ceremony marking its partial opening (Reuters File Photo)
by Associated Press Jun 12, 2017 12:00 am

Qatar said Monday it had begun shipping cargo through Oman to bypass Gulf countries that have cut off sea routes to the tiny, energy-rich nation, the latest move by Doha to show it can survive a diplomatic dispute with its neighbors.

Typically, cargo for Qatar stops at Dubai's massive deep-water Jebel Ali port or in the Emirati capital of Abu Dhabi, then gets put on smaller boats heading to Doha. But since June 5, the UAE has joined Saudi Arabia, Bahrain and Egypt in cutting off sea traffic to Qatar as part of the nations severing diplomatic ties over Qatar's alleged support of extremists groups and close ties to Iran.

Qatar's port authority said its cargo will go through Sohar, as well as Oman's port at Salalah, bypassing the need to dock in any of those countries that have cut ties. Global shipper Maersk already has said it will begin using Salalah for its shipments to Qatar.

Meanwhile, Iran's state-run IRNA news agency has said two Iranian navy vessels will stop off in Oman soon as part of an anti-piracy patrol. Oman, not among those countries cutting ties to Qatar, routinely serves as a back-channel negotiator for Western governments needing to speak to Tehran.

The diplomatic crisis, the worst since the 1990 invasion of Kuwait by Iraq and the subsequent Gulf War, has seen Arab nations and others cut ties to Qatar, which hosts a major U.S. military base and will be the host of the 2022 FIFA World Cup. Doha is a major international travel hub, but flagship carrier Qatar Airways now flies increasingly over Iran and Turkey after being blocked elsewhere in the Middle East.

After an initial run on supermarkets by panicked residents, Qatar has secured dairy products from Turkey. Iran also has shipped in vegetables by air and plans to send some 350 tons of fruit by sea to Qatar, with which it shares a massive offshore natural gas field.