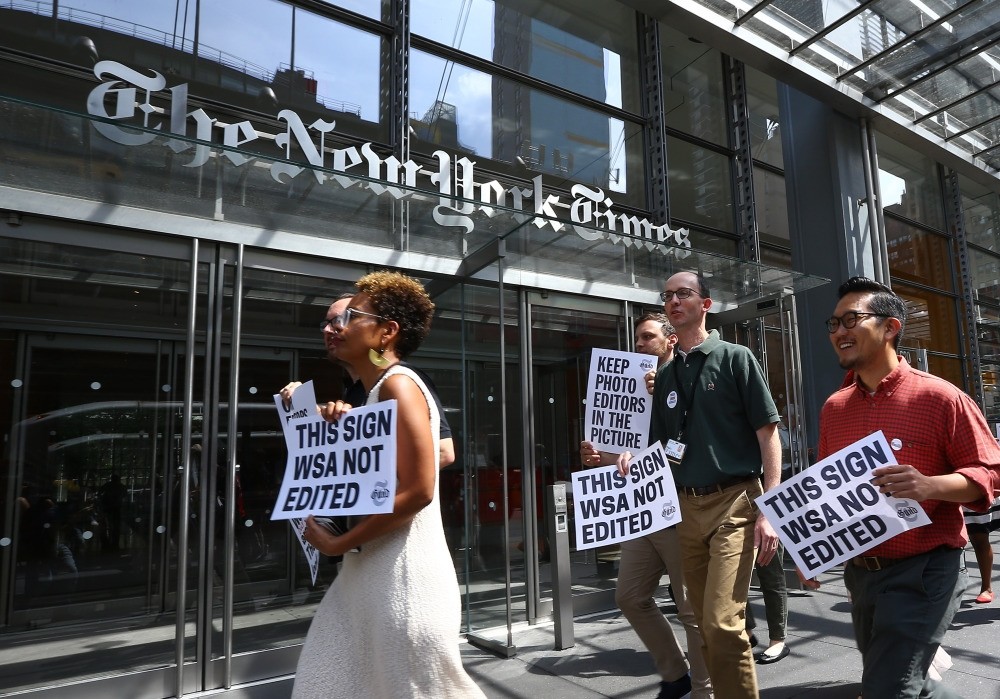 More than 400 New York Times employees walked off the job yesterday to show solidarity with copyeditors facing job cuts.The group protested in front of the legendary newspaper's headquarters in New York City, shouting slogans such as,:"They say cutbacks, we say fight back", and holding signs that read: "Who do you think makes sure its fit to print?" a reference to the NY Times' slogan: "All the News That's Fit to Print". Executive Editor Dean Baquet and Managing Editor Joseph Kahn last month announced a plan to streamline the newsroom and reduce the amount of copyeditors needed.

As part of the change, half of the more than 100 copyeditors currently employed would lose their jobs and the savings would be invested in hiring about 100 new journalists. The goal of the reshuffling is to tip the balance between copyeditors and reporters toward the latter. The NewsGuild of New York union that represents many of the staffers sent a letter Wednesday that criticized the decision and threatened the walkout that came to fruition a day later.

"We are your readers," the letter addressed to Baquet and Kahn said, "and you have turned your backs on us."

NY Times reporters also sent a letter to their bosses Thursday that slammed the decision and disparaged the argument that culling the copyediting desk would help reporters.

"We want forceful, focused intellects, brought to bear on our work," the letter said. "We realize that painful change is afoot. We've accepted and borne the brunt of many rounds of layoffs and buyouts. None were as destructive to morale - nor, we fear, as destructive to the Times - as this one. It is something different in kind." Affected staffers must accept a buyout package from the company by July 20.