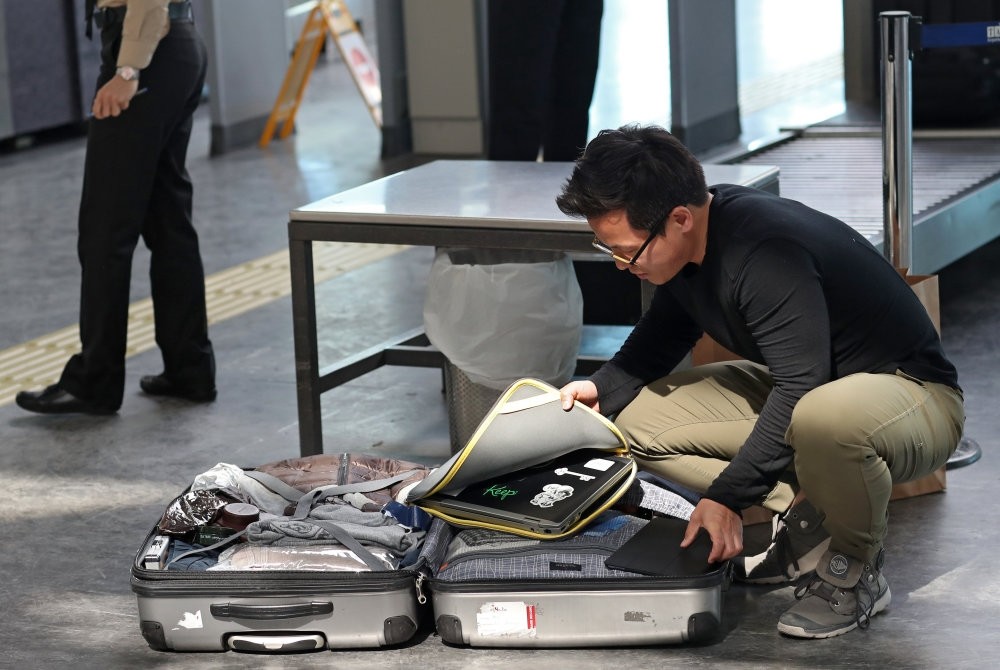 Passengers open their luggage and show their electronics at a security point at Atatu00fcrk International Airport, Istanbul.
by Daily Sabah with AA
Jul 05, 2017 12:00 am

The electronic ban, which was imposed in March on flights from several countries, including Turkey, will be lifted as of today on Istanbul-U.S. flights, Transportation Minister Arslan announced yesterday

Transportation, Maritime Affairs and Communications Minister Ahmet Arslan said Tuesday that the ban on electronic devices applied to flights from Istanbul to the U.S. will be lifted as of today. In addition, a delegation of U.K. authorities landed yesterday in Istanbul in order to assess security at the airport after it was reported that a tomography-based device installed at Atatürk Airport will allow the U.S. ban formerly applied to electronic devices on flights departing from Turkey to be lifted.

Three officials from the British Security Administration visited various parts of the international terminal yesterday and it was learned that British authorities also examined boarding bridges that feature the CT scanner and provide passage to aircraft offering direct flights to the U.S.

It was also reported that the device manufactured under the "ClearScan" brand - approved by the U.S. Transportation Security Administration (TSA) and the European Civil Aviation Conference - will be inspected by a U.S. delegation expected to arrive at the airport today.

It was also stated that the ban is likely to be lifted following the observational confirmation of the device's functionality by TSA authorities.

Recalling that the U.S. imposed a ban on electronic devices larger than mobile phones on direct flights from eight countries including Turkey, Arslan said that as a result of the operation to be carried out today, the ban will be lifted. "Thus, Turkish Airlines (THY) and Ataturk Airport will be the first entities to see the ban lifted," he said.

Highlighting the fact that the Ministry has been engaged in talks with counterparts on the issue and is in the process of submitting arguments, Arslan said, "They have eventually come to this point." He also added that a tomography-based device has been installed at Istanbul Atatürk Airport, adding that the device's confirmation by observation will be carried out by U.S. officials.

Minister Arslan stated that as a result of this observational confirmation, the ban will be lifted at Ataturk Airport and will be effectively lifted on THY flights, recalling that passengers will be informed in a timely manner to prevent flight delays and passengers will have the opportunity to use their laptops in designated areas prior to boarding, giving them tablets on certain flights.

"If the electronics ban had been a long-term restriction, it would have forced passengers to consider new routes and alternative flight itineraries. However, this decision is advantageous for us and fortunately, the ban did not last long. We were not profoundly affected by the ban, but we also undertook extensive efforts to avoid being affected," Arslan noted, saying that the State Airports' Authority and THY had taken all necessary measures in this regard.

Pointing out that the Ministry continues to inform its counterparts on the situation, Minister Arslan noted that if the ban were to be enforced, it should be enforced in all countries, noting that the Ministry would have suspected malicious intent if the ban had only been applied to THY and not all airlines, pointing out that THY is considered a shining star as an airline that offers flights worldwide. "Our intense pressure in response to the electronics ban has, in this regard, resulted in a positive decision being made. First of all, the relevant authorities were forced to do so. 'We will apply the ban to all airlines and countries that do not take these measures,' they said, and gave us 21 days," Arslan explained, noting that during this period, if the measures that Turkey has taken are not taken by other airlines and airports, they will be covered by the ban, and that if they prove that they have taken these measures, they will be excluded.

THY Chairman İlker Aycı said yesterday that with the lifting of the ban on electronic devices applied to flights to the U.S., another obstacle will also be overcome.

Paying a visit to the Istanbul Airports Correspondents' Association, Aycı said that the ruling Justice and Development Party (AK Party) government, the minister of transportation, maritime affairs and communications, the minister of foreign affairs, the prime minister and the President have provided crucial support regarding the issue, adding that the heads of all relevant institutions were in support of the lifting of the ban.

Aycı stated that the Transportation, Maritime Affairs and Communications Ministry took a very important step by bringing the tomography device to Atatürk Airport, while THY implemented some innovative measures in order for passengers not to be affected by the ban, adding that they are engaged in close talks with U.S. authorities in terms of the installation and application of security devices.

Stressing that efforts towards lifting the ban continue for U.K. flights following the U.S. issue, Aycı said, "If the U.S., the source of this ban, regarded the work we have carried out in a positive light and deemed it sufficient and lifted the ban, the natural action would be for other nations to follow. However, every country has its own sovereign rights, evaluating itself and making its own decisions in that regard. Thus, we will continue with our initiatives."

Aycı also noted yesterday that the applications to be made on U.S. flights after the ban can only be seen as of today, adding that the new version of the application will be executed together with the competent authorities.

Highlighting that they perform the best search and scan in this regard while also conducting the most thorough checks possible, Aycı said, "We welcome our passengers on board and at take off. We will protect and maintain our prudence in this regard. I am very glad that we will hopefully resume with U.S. flights by solving such issues as 'get your laptop, give your laptop,' that have caused additional headaches for passengers."

The chairman also confirmed that the laptops that were taken when the ban was first introduced will be distributed to the charity institutions.