Shares, oil stumble after flying start to second half 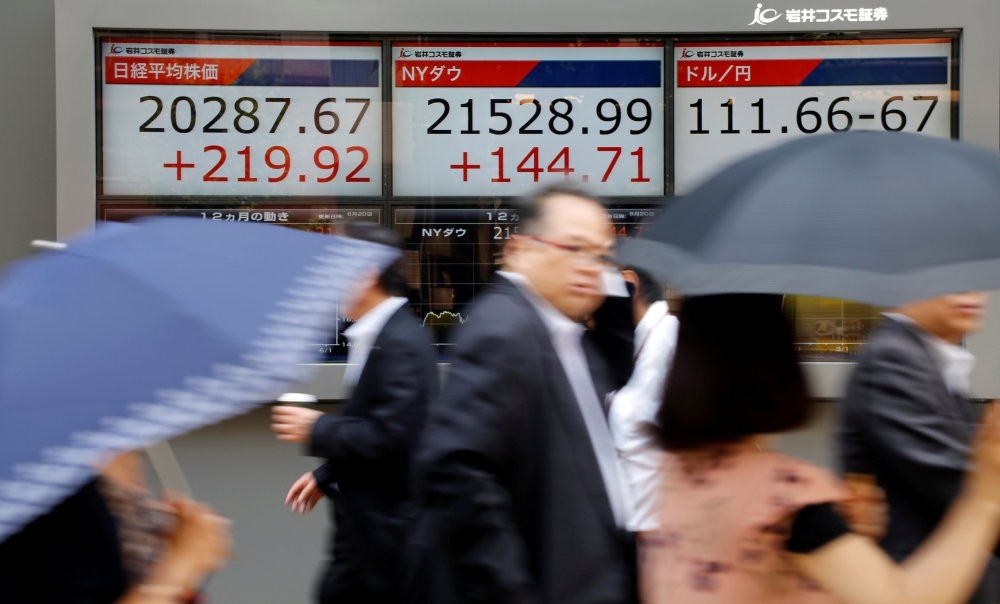 An electronic board showing Japan's Nikkei average (L), the Dow Jones average (C) and the exchange rates between the Japanese yen and dollar outside a brokerage in Tokyo.
by Jul 05, 2017 12:00 am

An aggressive pullback in global stocks and oil from last week's recovery was fueled by the geopolitical risks from North Korea's missile tests by as investors are waiting for the release of Fed minutes and U.S. job data to be announced Friday

World shares and oil pulled back and bonds and gold were back in favour yesterday, as a long-range ballistic missile test by North Korea and July 4 holidays for U.S. markets restricted risk appetite.

Asian shares were pushed lower and South Korea's won slid to a 16-week low after the North's missile landed in Japanese waters amid claims from Pyongyang that it could now strike "anywhere in the world".

Europe dropped too as the first fall in oil prices in nine days pushed down commodity stocks and traders also cashed in some of gains made by the STOXX 600 on Monday which had been the biggest in over two months.

The Japanese yen and gold were both higher, as were European bonds and Treasuries, which have been clobbered by recent signs that the era of emergency stimulus and ultra low interest rates might be coming to an end.

That took the wind out of the Swedish crown that had been the best performing global currency over the last week. The Australian dollar also took a tumble as its central bank steered clear of rate hike talk at its latest meeting.

"North Korea is continuing to provoke," he said. Although markets were now used to these kind of events he added: "It is a bit more important as it came ahead of the G20 meeting this week."

Leaders from the Group of 20 nations are due to discuss steps to rein in Pyongyang's weapons programs when they meet in Germany.

U.S. President Donald Trump wrote on Twitter: "North Korea has just launched another missile. Does this guy have anything better to do with his life?" in an apparent reference to North Korean leader Kim Jong Un.

The dollar lost 0.2 percent on the yen to leave it buying 113.19 yen. It made almost as much back against the high flying euro however, leaving the six currency dollar index steady at 96.259.

It had seen its biggest jump since the start of March overnight, as a stronger-than-expected rise in the June Institute of Supply Management (ISM) national factory activity index also propelled the 10-year Treasury yield to its highest since mid May.

There were increasing signs that alongside the geopolitical jitters, higher global borrowing rates and the dollar were starting to pressure emerging markets after their stellar start to the year. MSCI's widely-tracked emerging equity index saw its sharpest one-day drop in nearly three weeks and most Asian currencies were weaker. The won is now down 3 percent over the last two weeks, the Indonesian rupiah has erased weeks of gains in the last two days and the Philippine peso is stuck near multi-year lows.

Japan's Nikkei surrendered gains to end 0.1 percent down, South Korea's KOSPI closed 0.6 percent lower, though Hong Kong was hardest hit by the regional jitters as it slumped as much as 2 percent at one point.

Tokyo, reacting to the North's missile test, strongly protested what it called Pyongyang's clear violation of UN resolutions, and Japanese Prime Minister Shinzo Abe said he would ask the presidents of China and Russia to play more constructive roles in efforts to stop Pyongyang's arms program.

Commodity markets also saw a shift. Gold was shining at $1,224 an ounce while oil posted its first session of losses in nine, ending their longest run of gains since February 2012, as traders closed positions ahead of the July 4 U.S. holiday. U.S. crude slipped 0.5 percent to $46.90 a barrel while global benchmark Brent dropped to $49.50 as traders cashed in some of gains from a 3.7 percent leap -- its biggest one-day gain since December 2016 -- on Monday.