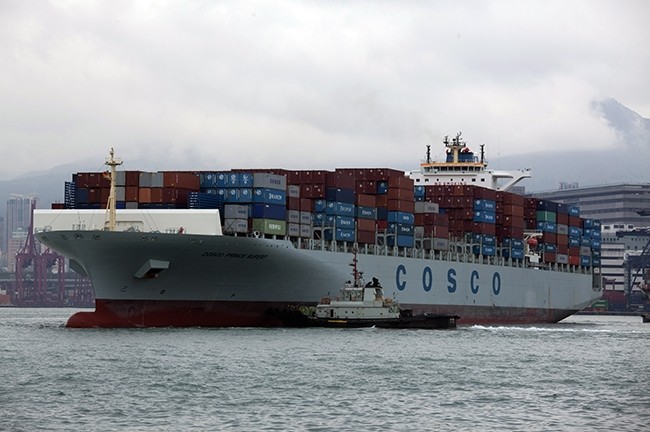 Chinese shipping giant COSCO has offered $6.3 billion to buy Hong Kong's rival firm Orient Overseas International Ltd, which would make it one of the world's largest container liner in an industry dominated by European players.

The move is the latest in a consolidation wave following the 2008 financial crisis, which led to too many vessels chasing too little cargo and shrinking freight rates.

Industry leaders are hoping the string of mergers will boost rates once more.

COSCO-OOIL would become the third-largest shipping player behind Danish conglomerate Maersk and Mediterranean Shipping Company, headquartered in Switzerland, if the takeover is given the green light.

The completion of the buyout will depend on approval from regulators and COSCO shareholders, the companies said in a statement Sunday.

Shares in OOIL were up 19 percent in afternoon trading in Hong Kong on Monday, while COSCO rose five percent.

State-owned COSCO said it will pay shareholders of the smaller privately owned OOIL HK$78.67 per share in cash, a 31 percent premium over the stock's last closing price, according to Bloomberg News.

OOIL, controlled by the family of former Hong Kong leader Tung Chee-hwa, has accepted the offer for its 68.7 percent stake and is projected to make more than $4 billion out of the deal.

"This decision has been carefully considered and we believe it helps ensure the future success of OOIL," said Andy Tung, the Hong Kong firm's executive director, in a statement.

"We respect OOIL's management team and its expertise, not to mention its people, brand and culture," he added.

Once the deal is completed, COSCO will hold 90.1 percent of OOIL, while Shanghai International Port will hold 9.9 percent.

But the companies will continue to be listed separately on the Hong Kong exchange and OOIL's global headquarters will remain in the city.

COSCO also vowed to retain all employees and their benefits, the statement said.

The move would give the company more than 400 ships and a capacity of 2.9 million containers, according to independent research company Crucial Perspective.

Jason Chiang, Singapore-based director at Ocean Shipping Consultants, predicted the COSCO buyout would be the last of the major mergers.

"Bad times in the industry made M&As necessary but with rates recovering that need will become less," he told Bloomberg.

South Korea's titan Hanjin Shipping sank into bankruptcy in 2016, further slimming down the field in a reflection of the slump in global trade and a growth slowdown in China.