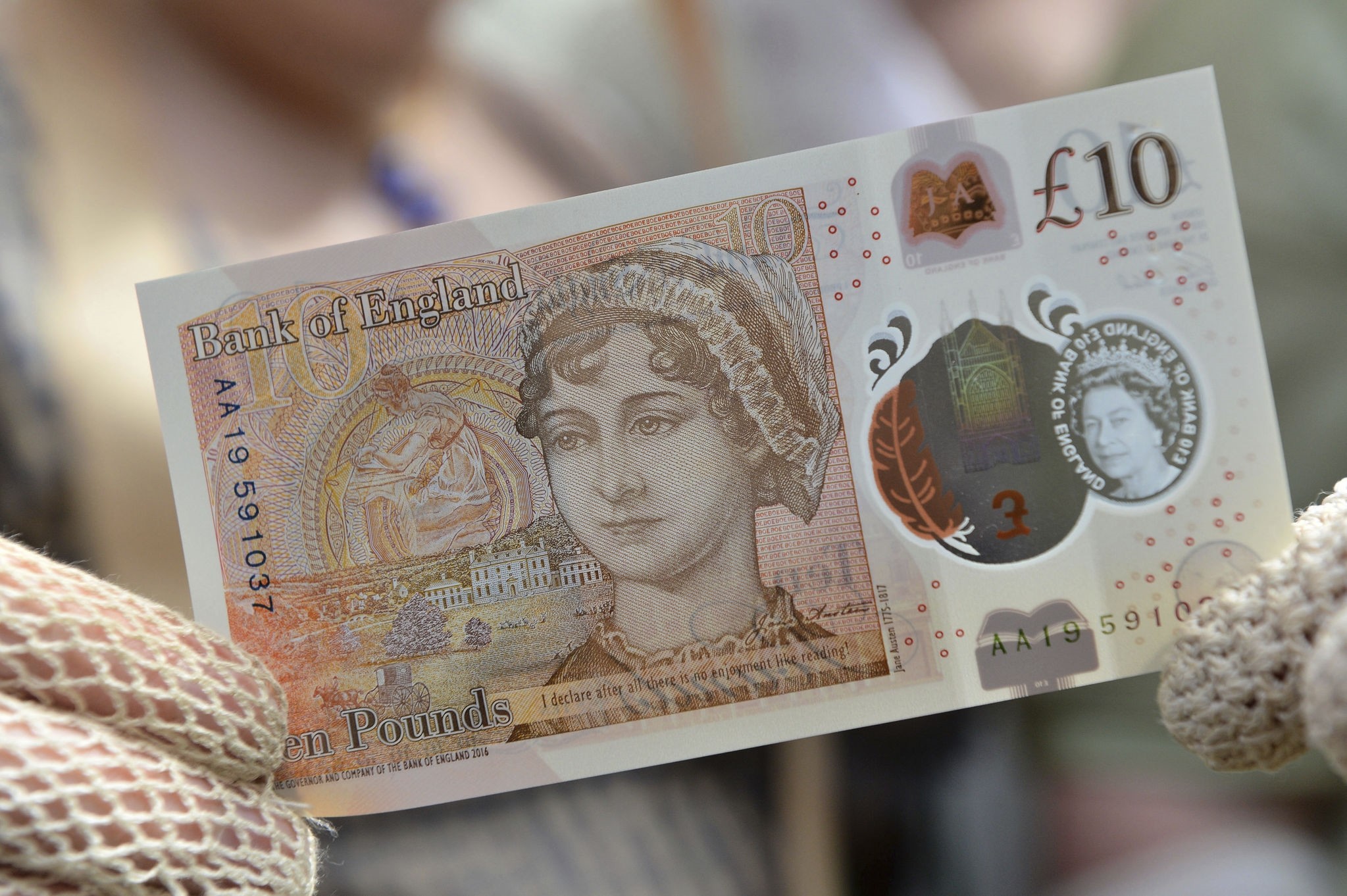 People in period costume pose with on the Bank of England's new ten pound notes, featuring author Jane Austen, during its launch at Winchester Cathedral in Winchester, on July 18, 2017. (AP Photo)
by Jul 18, 2017 12:00 am

The Bank of England on Tuesday unveiled a new bank note featuring Jane Austen to coincide with the author's death 200 years ago after a campaign to include more women on Britain's currency.

The new note worth ten pounds ($13, 11.3 euros) and made of polymer instead of paper will enter circulation in September.

Tuesday's launch follows the introduction of a polymer five-pound note last year that sparked controversy after the Bank of England confirmed that tallow, or animal fat, is used in the production process.

Activists and religious groups have called for sustainable, plant-based alternatives, but while the BoE is continuing to use tallow, it is looking at the possibility of finding a different product in time for the release of its polymer 20-pound note due 2020.

The Bank of England has praised the new notes for being waterproof and having enhanced security features.

"Our banknotes serve as repositories of the country's collective memory, promoting awareness of the United Kingdom's glorious history and highlighting the contributions of its greatest citizens," Carney said at the unveiling.

"The new 10 pound note celebrates Jane Austen's work. Austen's novels have a universal appeal and speak as powerfully today as they did when they were first published," he added.

The new notes will also contain raised dots to help the visually-impaired.

The current ten-pound note features scientist Charles Darwin, famous for his theory of evolution but these will be gradually phased out.

Austen is one of Britain's best-loved authors, who combined romance with biting social commentary that still speaks to fans around the world.

Tuesday marks the 200th anniversary of her death and there have been commemoration events around Britain.

The author of classic novels "Pride and Prejudice", "Emma" and "Sense and Sensibility" had only just become known when she died on July 18, 1817, aged 41.

But her six novels, dissecting the lives of 19th century rural aristocracy, have since sold millions of copies and led to film adaptations.

The appearance of Austen comes after the image of wartime leader Winston Churchill was chosen for the polymer five-pound note.

Polymer is a thin, flexible plastic film that is seen as more durable and secure and is used also for notes in Australia and Canada.

Her removal sparked a public outcry over the lack of female figures on banknotes -- except for Queen Elizabeth II who appears on the front of all British notes and coins currently in circulation.

Campaigners threatened to take the Bank of England to court for discrimination and launched a petition on Change.org that secured tens of thousands of signatures.

The new 20-pound note will feature artist J. M. W. Turner on its back.