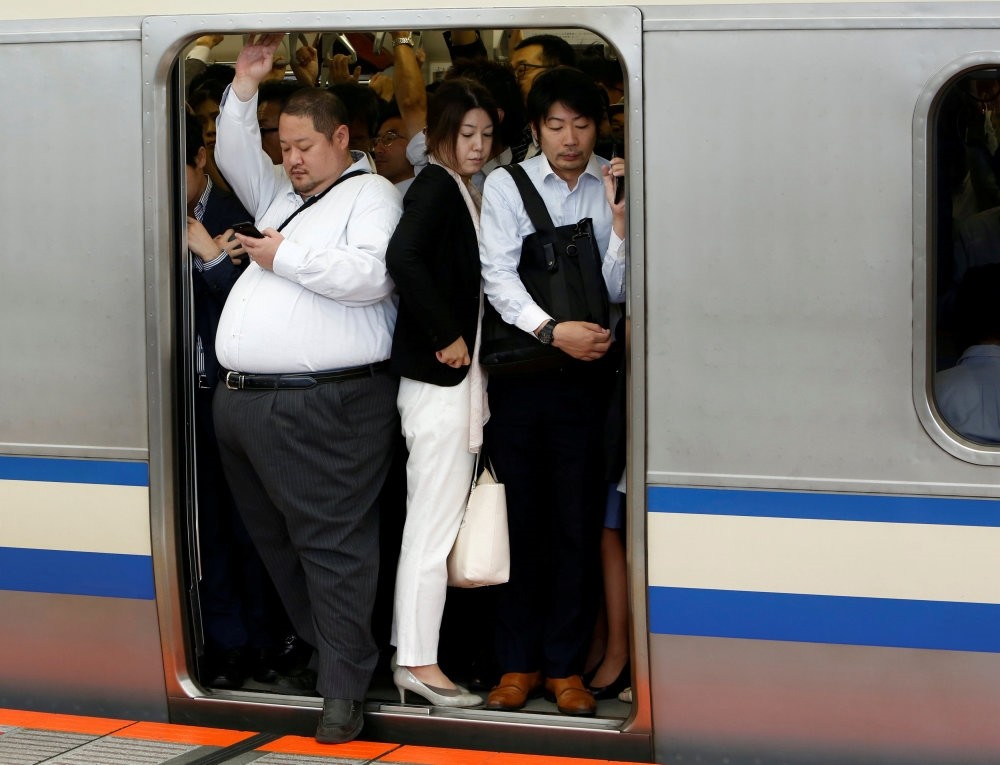 Passengers ride an overcrowded train at a station in Kawasaki, Japan.
by Compiled from Wire Services Jul 25, 2017 12:00 am

Japan yesterday launched a scheme to promote ‘telework', or working from home, in an effort to ease congestion when Tokyo hosts the 2020 Olympics, as well as soften the country's notoriously rigid work culture

Almost 930 Japan companies, including Suntory Beverage & Food Ltd , Ajinomoto Co, and Tokyu Construction Co are participating in "Telework Day," to be held on July 24 each year from now until the Olympics opening ceremony set for July 24, 2020.

Prime Minister Shinzo Abe's government has introduced policies to shorten working hours, raise contract workers' pay, and curb abuse of labour laws. Telework could be another way to reform working practices that some say are behind the times, according to Reuters.

"Once the Olympics start it will be hard to get to work, so we are doing this as an experiment," said Takashi Kozu, 61, president of the Ricoh Institute of Sustainability and Business. "The lifestyles of younger generations are changing, so firms should offer alternative work styles to maintain employees' incentive."

Kozu said he worked from home on Monday morning, planned to attend an off-site meeting in the afternoon and would not show up in the office until early evening. Telework is more common in other countries, especially in the information technology sector, where employees regularly use teleconferencing or log on from the neighbourhood cafe. But it has been slow to catch on in other industries in Japan, partly because firms have put a lot of emphasis on being physically present at the office, often for 12 hours or more.

But Japan, Inc. is starting to change its ways and introduce more flexible work hours. As the population ages, the labour force is shrinking at an alarming rate, and a hard-driving work culture makes it difficult to attract and retain workers. Some companies are starting to realise that long, inflexible hours of work actually keep labour productivity low. In some cases Japan's working culture can be fatal, and it is not uncommon for workers to commit suicide or suffer a stroke because of excessive hours.

"We are doing this for the Olympics, but the long-term goal is to have more humane working conditions," said Hiroshi Ohnishi, a planner at the Ministry of Economy, Trade, and Industry, which is promoting "Telework Day."

"In the past, working long hours was considered a virtue, but this thinking will not hold up in the future."

Meanwhile, Japan marked three years before the 2020 Tokyo Olympics yesterday with celebration and fanfare -- even as organisers struggle to contain soaring costs and restore credibility, according to Agence France Press (AFP). Japanese celebrities and athletes dressed in bright kimonos gathered at the launch of a remake of a popular 1964 Tokyo Olympic song as organisers promised to turn the 2020 Games into the biggest "natsu matsuri" (summer festival) ever.

Other events were held across Japan, including a 1,000-kilometre (620-mile) run and cycling relay from northern Aomori prefecture to Tokyo, taking in areas hit by the deadly 2011 tsunami and featuring 2000 Sydney Olympic marathon champion Naoko Takahashi at the start. A surfing exhibition by pros also took place at the Tsurigasaki beach venue in Chiba - an hour outside Tokyo -- where the sport will make its Olympic debut in 2020.

Japanese organisers however have plenty of work to do. The International Olympic Committee (IOC) last month praised local organisers for slashing costs, fearful that ballooning budgets could see future bids dry up. Tokyo Governor Yuriko Koike last year ordered a review of the budget that recommended revised plans to reduce costs projected to rise to more than $25 billion -- four times the initial estimates when Tokyo won the 2020 hosting rights. Local organisers have since slashed costs to around $13 billion but have otherwise largely failed to inspire confidence since Tokyo beat Madrid and Istanbul in the race to host the Games for a second time. They bungled the rollout of the centrepiece Olympic stadium two years ago when Prime Minister Shinzo Abe tore up the blueprints amid public anger over its price tag. More embarrassment followed when the original Games logo was scrapped following allegations of plagiarism.