Germans in Alanya want to see quick recovery in relations 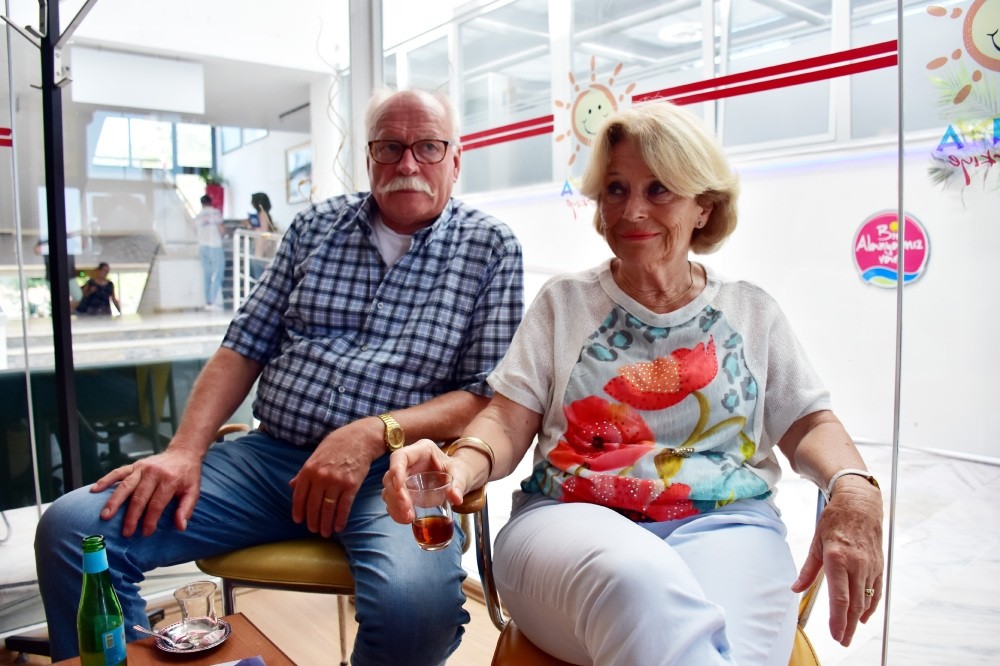 Ursula Greune and Armin Kuschmann (above), Germans who live in Alanya, evaluated the Turkish-German relationship, saying that they believe the problems between the two countries will be solve in a short time.
by Daily Sabah with AA Jul 26, 2017 12:00 am

Following the recent rise in tensions in Turkish-German ties, Germans who live in Alanya say they are living happily in Turkey and want the crisis to end as soon as possible

Germans living in Antalya's Alanya district want an end to the tension between Turkey and Germany as soon as possible. Approximately 10,000 Germans live in Alanya. Some of the Germans in the district spoke to Anadolu Agency (AA) regarding the point reached in Turkish-German relations and the tension between the two countries.

Many said that they have lived happily in Turkey for years and that they have not seen any pressure or violence from Turkey or its people despite the tension between the two countries.

Petra Erika Kastner, who recently bought a house in Alanya, said they prefer living there because of her husband's health problems and the region's climate.

Kastner said they have an extremely happy and peaceful life in Turkey, explaining that Turkish-German relations will not affect her and her husband. "Our first reason was health and climate, but we were happier when we came and saw the warm and friendly nature of the people here," she said. "The ambience is very nice. It's not what we have been told. On the contrary, we are very happy and we will apply for a residence permit."

is so great' Kastner expressed her dissatisfaction with Germany's travel warning to Turkey, saying it stems from political reasons, explaining that she has found Turkey to be a friendly place.

Noting that they are very pleased with the local hospitality, Kastner said: "I hope these problems will be temporary, and no harm will come to the Turkish-German friendship. The problem between the governments upsets and worries the people of the two countries." Kastner also said that even when they were living in Germany, they left their hearts and love in Turkey, hoping that the crisis between the two governments would not affect the people. "We love Turkey very much. We are pleased and happy to live here. In short, Turkish hospitality and philanthropy are so great that it cannot be described but only experienced."

exaggerations in Germany'Kastner's retired husband, Helmut Manfred Kastner, 63, said they had vacationed four times in Turkey, adding that they like it more every time they came, finally deciding to settle here. Explaining that the weather is very nice and the people are warm and friendly, he said only the tension in the Turkish-German relations is upsetting, suggesting that there are many exaggerations in Germany. "We love Turks very much and they love us too, we are very happy here, we loved our home while buying it. My advice is that politicians sit and talk through the issue rationally and logically. We must do what we can in order for this friendship to be eternal."

Ursula Greune, who has lived in Alanya for 11 years, said she had traveled to Turkey before moving there and the troubled relations between the two countries in recent years has been upsetting. Indicating that this situation has not affected her life in Alanya, Greune said: "The recent events have been disturbing, but I do not have any problems, and I am very happy here. I do not feel any fear."

Greune believes that the problem in Turkish-German relations will be lifted through dialogue, saying that families can have problems from time to time, and that the problems between the two friendly countries will be solved in a short time.

Recalling that people from many live in Alanya, Greune said: "Everyone is doing their best for a peaceful and happy life for all the foreigners living here. The foreigners that live here are happier than [if they were] in their own country." Armin Kuschmann, a 67-year-old German, said he settled in Alanya a year ago and that he found his partner in the city. "We met a year ago. I came here to visit her, and I love it here. So, I decided to stay. However, I had never come to Turkey before. It was my first time and I stayed because the people and the country surprised me. Its people are perfect. I feel incredibly happy with myself," Kuschmann said.

Kuschmann pointed out that such crises are everywhere, suggesting that it will all go away. Explaining that they did not see a negative change in Turkish people's opinion concerning Germans in a year, he recommended that politicians be more careful.