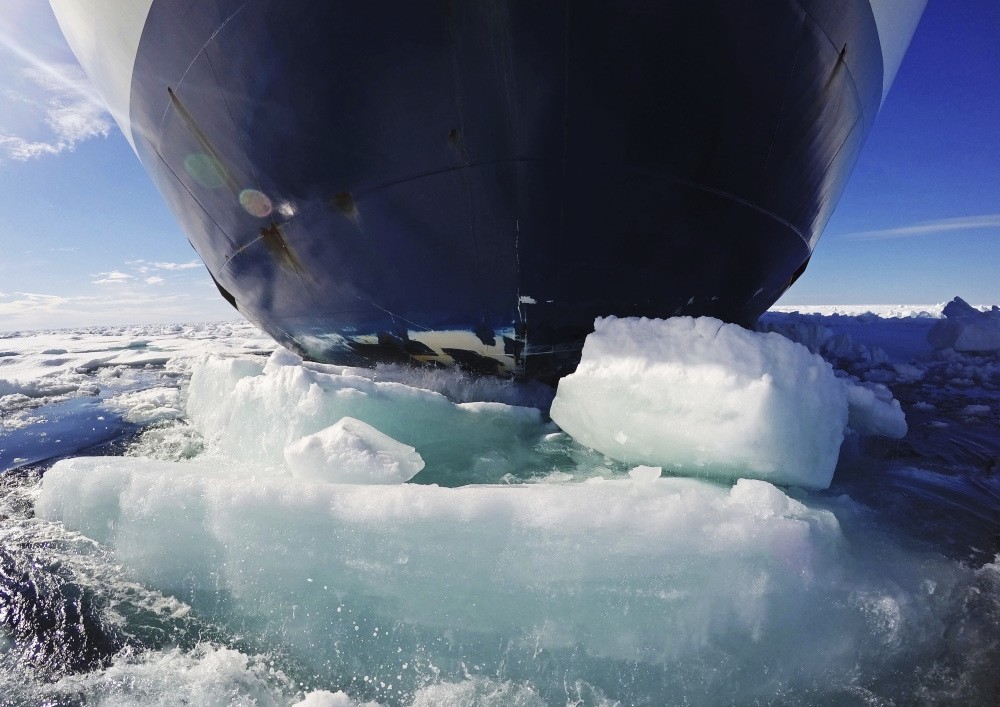 The bow of the Finnish icebreaker MSV Nordica pushes down sea ice as it traverses the Arctic's Northwest Passage through the Canadian Arctic Archipelago.
by Associated Press Aug 24, 2017 12:00 am

As climate change pushes the ice a little farther north each year, it is spurring talk of a gold rush in the Arctic for abundant natural resources, prized shipping routes and business opportunities in tourism and fishing

From a distance, the northern shores of Baffin Island in the Arctic appear barren - a craggy world of snow-capped peaks and glaciers surrounded by a sea of floating ice even in the midst of summer. Yet beneath the forbidding surface of the world's fifth largest island lies an exceptionally pure strain of iron ore, and the Baffinland mine is believed to hold enough of it to feed smelters for decades. As climate change pushes the ice a little farther north each year, it is spurring talk of a gold rush in the remote Arctic for abundant natural resources, prized shipping routes and business opportunities in tourism and fishing.

The Arctic, including the fabled Northwest Passage between the Atlantic and the Pacific, is among the last regions on earth to remain largely unexplored. In April, U.S. President Donald Trump signed an executive order to reverse Obama-era restrictions on oil drilling. However, experts say there remain many obstacles to reaping the riches once blocked by the ice. The Associated Press took a first-hand look at the region on a month-long, 10,000-kilometer (6,200-mile) journey aboard the Finnish icebreaker MSV Nordica, along with researchers specializing in Arctic development.

"As the world demand for raw materials is ever increasing, and (with) a realization that a large part of the unexplored deposits are in the Arctic, there is a natural shift to focus on that area," said Mads Boye Peterson, head of Denmark's Nordic Bulk Carriers Shipping. Peterson's company sent a freighter through the Northwest Passage four years ago to show the route can be used to haul cargo in summer. However, he also noted that rising temperatures make operations harder because moving floes are less predictable than unbroken sheets of ice.

"On the surface it might look like a slam dunk," he said. "But it's actually a lot more complicated than just something you decide to do overnight."

The U.S. Geological Survey has estimated that up to 30 percent of the world's undiscovered gas and 13 percent of oil waiting to be found are inside the Arctic Circle. Precious minerals also slumber beneath the icy surface, along with rare earth elements, lithium and cobalt, used in batteries for electric cars and handheld devices, said Morten Smelror, director of the Geological Survey of Norway.

"The Arctic is certainly among the last frontiers with respect to undiscovered mineral resources, along with the deep oceans," said Smelror. The geography also opens up new opportunities. Sailing through the Northwest Passage could potentially cut the distance from East Asia to Western Europe by more than 10,000 kilometers (6,200 miles), compared with the traditional route through the Panama Canal, offering huge fuel savings. The battle for the Arctic is being fought by geologists and legions of lawyers.

Greenland has staked its claim to the Lomonosov Ridge beneath the Arctic Sea, which would greatly extend its rights to the sea bed for possible mining. Russia contests the claim. Russia boldly planted an underwater flag at the North Pole 10 years ago, and has been expanding infrastructure along its northern coast. Canada contends the Arctic archipelago's waters are its internal waters, and has stepped up its presence in the region, including creating a new Arctic research center. The United States contests Canada's claim, which would give Ottawa the right to stop ships from freely traveling through the Northwest Passage.