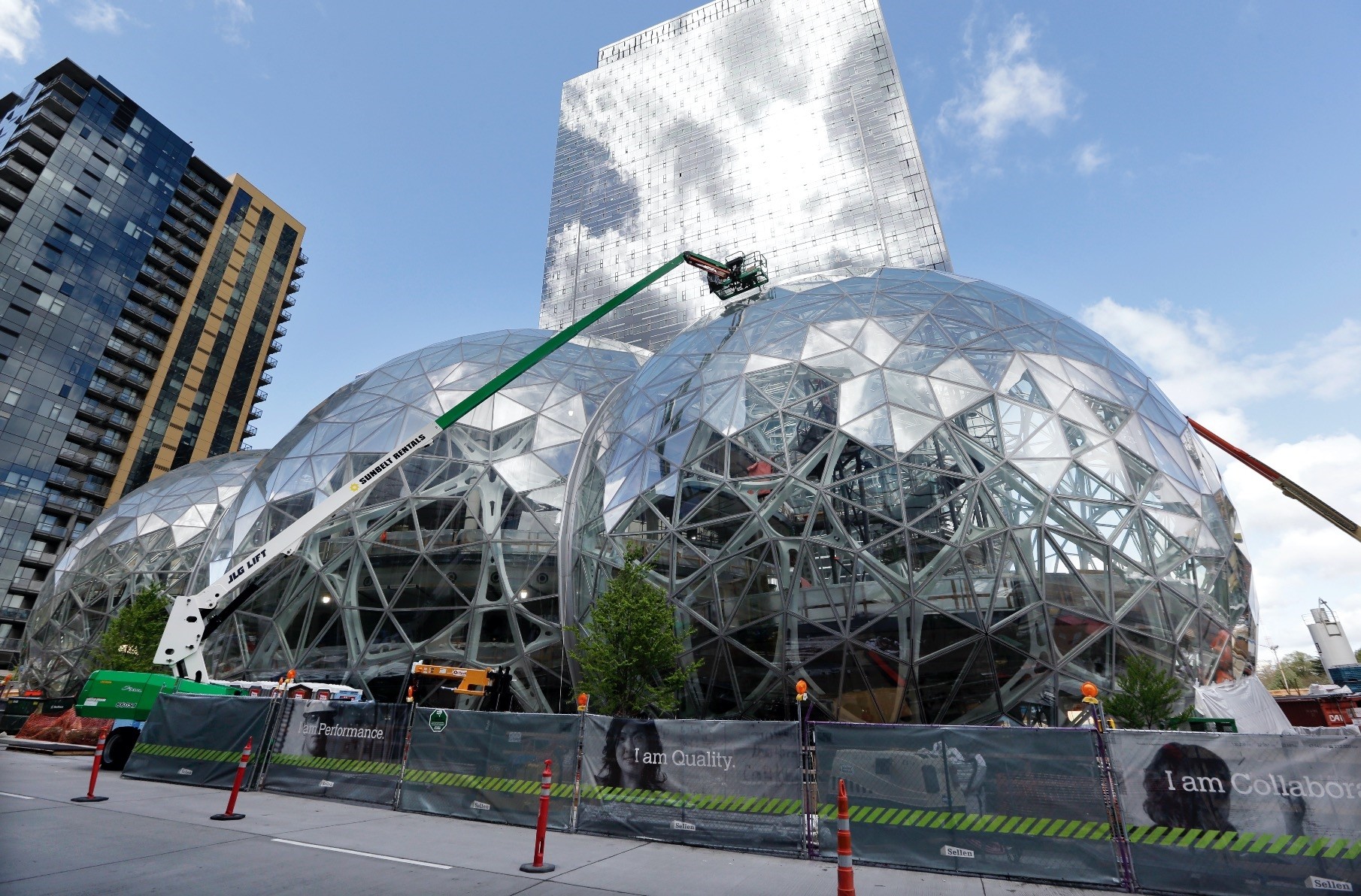 Construction continues on three large, glass-covered domes as part of an expansion of the Amazon.com campus in downtown Seattle. The structures are expected to begin being used by employees in early 2018.
by Associated Press Sep 09, 2017 12:00 am

Amazon, bursting out of its Seattle headquarters, is hunting for a second home. Must haves: A prime location, close to transit, with plenty of space to grow. The company said Thursday it will spend more than $5 billion to build another headquarters in North America to house as many as 50,000 employees. It plans to also stay in its sprawling Seattle headquarters, with the new space "a full equal" to that, said founder and CEO Jeff Bezos. Amazon's announcement highlights how fast the e-commerce giant is expanding, and its need to find fresh talent to fuel that growth. With the lure of so many new jobs, city and state leaders were already lining up Thursday to say they planned to apply.

Among them: Chicago, Philadelphia and Toronto. They have a little more than a month to do so through a special website , and Amazon said it will make a decision next year. Its requirements could rule out some places: Amazon wants to be near a metropolitan area with more than a million people; be able to attract top technical talent; be within 45 minutes of an international airport; have direct access to mass transit; and be able to expand that headquarters to as much as 8 million square feet in the next decade. That's about the same size as its current home in Seattle, which has 33 buildings, 23 restaurants and houses 40,000 employees.

"They're so big in Seattle, they're running out of room," said Kevin Sharer, a corporate strategy professor at Harvard Business School. Amazon said it will hire up to 50,000 new full-time employees at the second headquarters over the next 15 years, and they would make an average pay of more than $100,000 a year. The company is hoping for something else from its second hometown: tax breaks, grants and other incentives. A section of the proposal that outlines those says "the initial cost and the ongoing cost of doing business are critical decision drivers."

Amazon gets tax breaks when cities compete for its massive warehouses, where it packs and ships orders. The company received at least $241 million in subsidies from local and state government after opening facilities in 29 different U.S. cities in 2015 and 2016, according to an analysis by Good Jobs First, a group that tracks economic development deals. In explaining why it was holding a public process, Amazon said on its site that it wanted "to find a city that is excited to work with us and where our customers, employees, and the community can all benefit." Amazon.com Inc. said its search is open to any metropolitan area in North America, but declined to say how open it was to going outside the United States. Jed Kolko, the chief economist at job site Indeed, noted that the company's request for proposals mentions "provinces" several times - a clear sign it would consider a Canadian metro area.

Kolko also said an East Coast locale could bring it closer to the company's offices in Europe. Amazon's arrival might transform an area: Until 10 years ago, the neighborhood near Seattle's campus just north of downtown was dotted with auto parts stores and low-rent apartments. Now it's a booming pocket of high-rise office complexes, sleek apartment buildings and tony restaurants. And the company keeps growing. Amazon has said it will hire 100,000 people by the middle of next year, adding to its current worldwide staff of more than 380,000. It announced plans to build three new warehouses that pack and ship packages in New York, Ohio and Oregon. And it recently paid close to $14 billion for Whole Foods and its more than 465 stores.