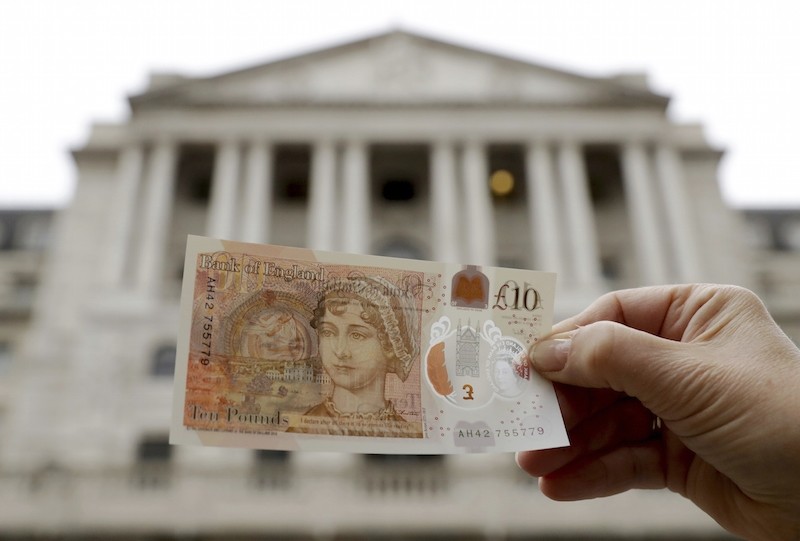 Apart from the Queen, whose portrait is on all U.K. currency, Austen is only the third woman to feature on a modern-day British banknote, after medical innovator Florence Nightingale and social reformer Elizabeth Fry. She was chosen after a campaign for more female representation.

The new 'tenner,' as it's commonly known, is the first British banknote with a tactile feature, a series of raised dots in the top left-hand corner to help blind and partially sighted users.

The note is made of polymer and is the central bank's latest effort to make cash harder to counterfeit, following last year's launch of a similar five-pound note that showcases Winston Churchill. A new 20-pound note featuring artist JMW Turner will follow in 2020.

"Our banknotes serve as repositories of the country's collective memory, promoting awareness of the United Kingdom's glorious history and highlighting the contributions of its greatest citizens," said Bank of England Governor Mark Carney. "Austen's novels have a universal appeal and speak as powerfully today as they did when they were first published."

Austen, whose novels include "Pride and Prejudice," ''Emma," and "Sense and Sensibility," is considered one of the great chroniclers of English country life in the Georgian era at the turn of the 19th century. Combining wit, romance and social commentary, her books have been adapted numerous times for television and film.

As well as a portrait of Austen commissioned by her nephew in 1870, the note features a quote from "Pride and Prejudice": "I declare after all there is no enjoyment like reading!"

New security features on the tenners — which are currently worth about $13 each, enough to buy a couple pints of beer or Austen novels — will make them more difficult to counterfeit, the bank said.

The transition to polymer has sparked controversy after the central bank confirmed that a small amount of tallow, or animal fat, was used in the production process. But in August, following a public consultation, the bank said it would stick to the composition of the banknotes as the only viable alternative was using palm oil, which raised questions related to environmental sustainability and value for money.

"It is wonderful to see the inspirational author Jane Austen celebrated," said Victoria Cleland, the Bank of England's chief cashier. "And even more poignant being launched during the 200th anniversary of her death."