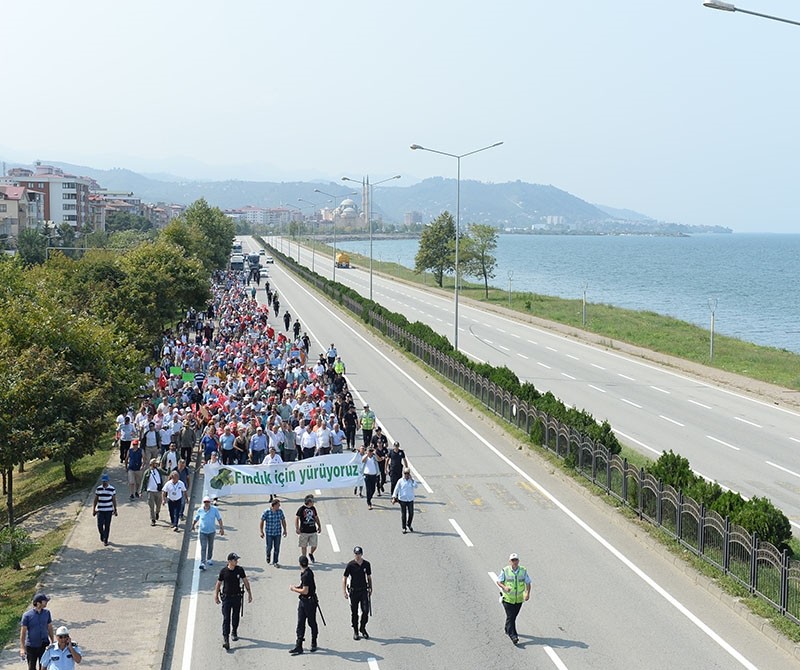 A march organized by the main opposition Republican People's Party (CHP) in northern Turkey to protest base prices of hazelnuts, the main agricultural product of the Black Sea provinces of Ordu and Giresun, has entered its second day.

The second day of the march, which began in Ordu, started in Giresun's Piraziz district. Hazelnut producers, who also participated in the march, walked on the Black Sea Coast Highway holding placards and Turkish flags.

Speaking to reporters, CHP Vice Chairman and Ordu deputy Seyit Torun said that they covered a 21.5 kilometer -section of the route on the first day with a large turnout from locals.

"Our march has already shown some results," Torun said. "I heard this morning that the price of hazelnuts raised from 7.50 Turkish liras to TL 8-8.50. This is such good news. That means that when producers aim to protect their rights, the market and government will react to his request," he added.

Food, Agriculture and Livestock Minister Ahmet Eşref Fakıbaba previously announced on Saturday that the Turkish Grain Board (TMO) will be subsidizing producers with TL 1.5 to TL 2 per kilogram this season. He added that the TMO has bought TL 40 million worth of hazelnuts so far and will continue to buy the remaining harvest from producers. Referring to CHP's upcoming march, Fakıbaba said: "People can walk of course, we are living in a democratic country, but they shouldn't waste their energy while walking."

Torun stated that he heard Fakıbaba's statements, but he claimed that he was given inadequate information and asked the minister to also listen to their requests.

"This walk is a walk of support to all Turkish farmers, this is a walk for all cultivators' rights," Torun added, saying that all agricultural producers would seek their rights once hazelnut producers got what they wanted.

The march came after the "Justice March" launched by CHP Chairman Kemal Kılıçdaroğlu, who walked a 420-kilometer route between capital Ankara and Istanbul between June 15 and July 9 in protest of the arrest of CHP Istanbul deputy Enis Berberoğlu upon espionage charges. The party later held a "Justice Assembly" in the western province of Çanakkale between August 26 and 30.

Turkey is the largest producer of hazelnuts in the world with nearly 75 percent of worldwide production. The country earned some $2.3 billion from hazelnut exports in the 2016-2017 harvest season.

Despite rising base prices, producers argue that they barely cover their expenses and ask for augmented base prices as well as a better regulated market in favor of producers.