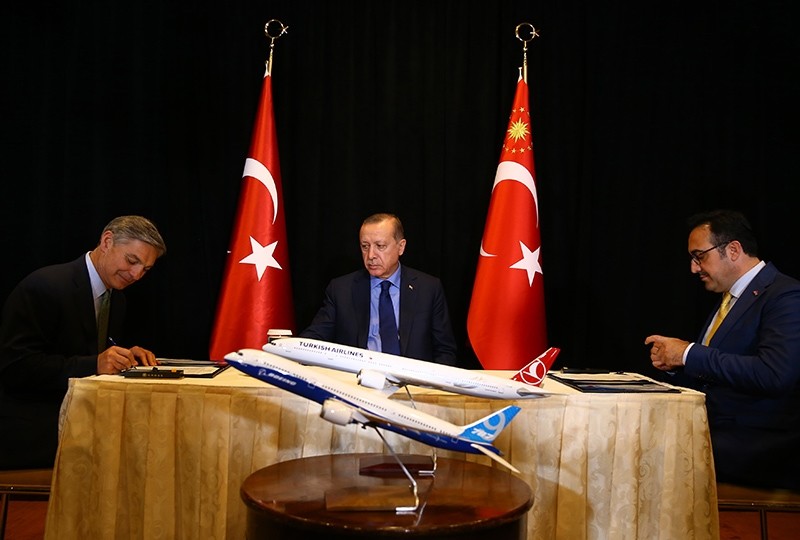 Turkish Airlines (THY) and one of the biggest aircraft manufacturers in the world, Boeing, announced Friday the Turkish national flag carrier intends to buy 40 787-9 Dreamliner aircraft.

The preliminary deal was signed by THY Chairman of the Board and the Executive Committee M. İlker Aycı and Boeing Vice Chairman Roy Conner in New York. President Recep Tayyip Erdoğan also attended the signing ceremony.

"The 787 Dreamliner is the most technologically advanced airplane in the world. Our intent to purchase these Dreamliners is to meet the demand for wide-body airplanes at [Istanbul's] third Airport, further strengthen our fleet capacity on the 100th anniversary of the Republic [of Turkey] and to enhance passenger satisfaction," Aycı said following the ceremony.

Boeing Commercial Airplanes President and CEO Kevin McAllister, in turn, said the company appreciated THY's confidence in its aircraft, adding that the airline is "a great partner."

The agreement is valued at $10.8 billion at Boeing list prices.

The twin-engine Dreamliner is a long haul, midsize wide body airliner that can seat up to 335 passengers.

The Turkish government and Boeing also announced the Boeing Turkey National Aerospace Initiative, which is expected to support the growth of the Turkish aerospace industry. The initiative aligns with the government's 2023 Vision, the centenary of the Turkish Republic.

"Boeing's relationship with Turkey spans more than 70 years, and we have outstanding long-term partnerships. Working together with Turkey, we are now taking our collaboration to the next level, which will accelerate the growth of the Turkish aerospace industry, while achieving Boeing's long-term objective to expand its presence in the marketplace," Conner said.

According to Boeing, the initiative "outlines a strategic framework that aligns Boeing investment and programs with the government, Turkish airline companies, aerospace service companies and industry suppliers in the areas of research, engineering and skills development."

The aircraft manufacturer added that joint programs with Turkey reflected confidence in the long-term outlook for Turkey as a significant market and a leading global industry participant.

Turkish Airlines flies to 120 countries, more than any other airline. Turkey's flag carrier currently has 337 aircraft and flies to more than 302 destinations – over 250 international.