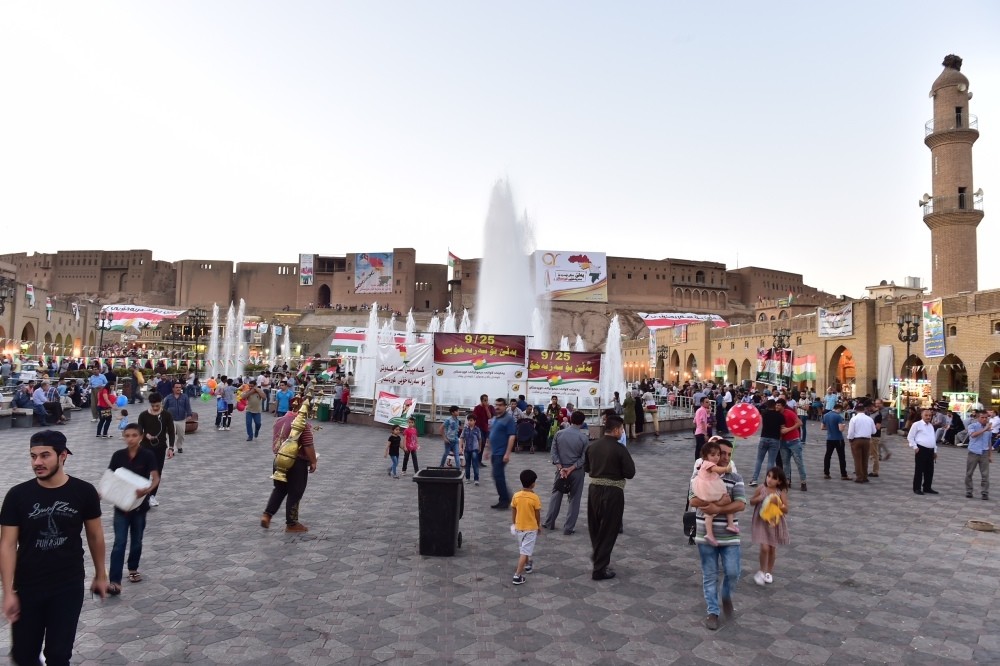 Afraid of the possible economic consequences the KRG's independence referendum could bring along with it, civilians in northern Iraq have begun to stock up on dry food amid fears that Turkey will close its border gates

In the Kurdistan Regional Government's (KRG) Northern Iraq, where an independence referendum is set to take place today despite international condemnation, the public has begun stocking up on canned goods and dry foods amid fears of border gate closings in the wake of the controversial vote.

"We do not have any items left on our shelves. Citizens are afraid that Turkey will close the border gates," a merchant in the area said, referring to the referendum that is reportedly expected to have political and economic consequences.

Turkey's determined attitude against the KRG's independence referendum today is having a major impact on Irbil. People flocked to grocery stores and food markets to stock up on basic food items such as bulgur, flour, salt, oil and tomato paste.

Izzeddin Sadreddin, a 62-year-old food trader, said that stores are being restocked and emptied every day, adding that shopkeepers are unable to keep up with demand.

"Our nation has been struck by poverty many times. We are well-aware of the threat of poverty and impossibility. For this reason, Turkey's threats to close the border gates have had a profound effect here. People are upset and very worried that food prices will skyrocket and borders will close," he said.

Meanwhile, Izzeddin Sadreddin's son Muhammed, said, "The referendum was announced. Then came the harsh messages from Turkey and Iran, and stocking up has persisted ever since. Both citizens and wholesalers come here to buy goods."

Explaining that they import chickpeas from Mexico and rice from India, Sadrettin said, "All of these imports come from Turkey's Mersin Port. Everyone knows that there will be great hardship if Turkey closes the borders."

In addition to tradesmen, the leaders of opposition movements in the region have also criticized the current situation in Northern Iraq, asking for "no" votes in the referendum, saying, "The timing of independence is not right. The KRG is not yet ready to stand on its own feet."

Turkey made $7.6 billion in exports to Iraq in 2016, realizing a majority of its transactions with Northern Iraq. Turkey mainly sells food, textiles and furniture products to Northern Iraq, where Turkey has $2.5 billion in trade volume.

Flour and pasta manufacturing facilities in Turkey's Gaziantep and Mardin provinces achieve high figures in exports to the region.

According to analysts, Turkey has two more important trumps apart from military moves. The first is commercial sanctions. Turkey is the KRG's most important and profitable oil/natural gas sales route.

According to Agency France-Presse (AFP) and Financial Times reports, 600,000 barrels of oil are produced in KRG per day, 550,000 of which are sold through Turkey. It is stated that 250,000 barrels of this oil are extracted from the Kirkuk region, which has a Turkmen population.

Meanwhile, the region is quite problematic in terms of water resources, as pointed out in a report recently published by Straftor, which is referred to as "The Shadow CIA." Water resources for the region primarily come from Turkey, and Ankara can reduce the amount of water the KRG receives whenever it wants via operation of its dams.

Worst crisis in the country's history

It is known that the KRG, which has been deemed autonomous de facto since 1991 and according to the Iraqi Constitution since 2005, is in the middle of the most serious economic crisis of its short history.

The KRG has been weighed by the decline in oil prices, decrease in revenues from Iraq's central government, resources devoted to fighting the terrorist organization Daesh, and the burden of nearly a million immigrants fleeing to the region due to violence in Syria.

Even the salaries of public officials are not being paid, either on time or at all. Therefore, the president of the KRG, Masoud Barzani, is insisting on a referendum to turn attention away from the economy and to gather more support against the opposition.