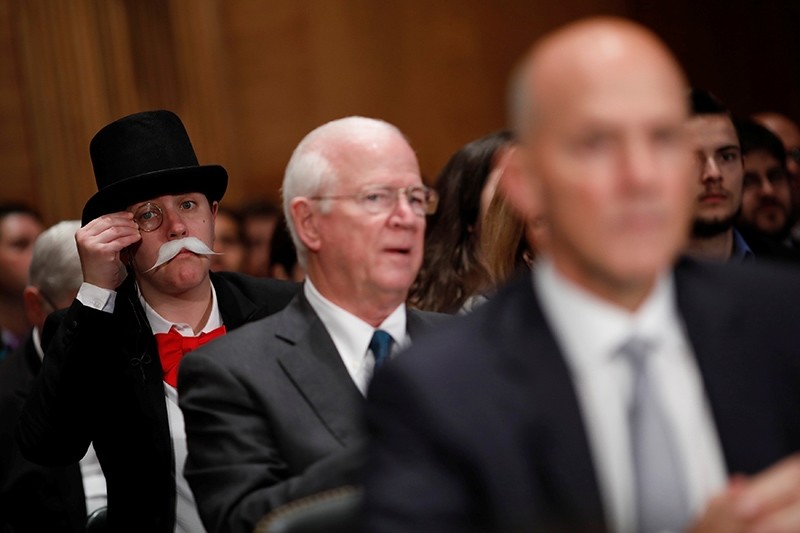 A hearing attendee looks on as Richard Smith, former chairman and CEO of Equifax, Inc., testifies before the U.S. Senate Banking Committee on Capitol Hill in Washington, U.S., Oct. 4, 2017. (Reuters Photo)
by Daily Sabah Oct 04, 2017 12:00 am

A woman dressed as 'Monopoly Man' from the popular board game showed up at the Senate Banking Committee hearing on the Equifax data breach Wednesday.

Wearing a top hat and a binocular just like Rich Uncle Pennybags, the woman sat right behind Equifax CEO Richard Smith as he testified on the hack that affected 145.5 million people.

An anti-corporate advocacy group Public Citizen later tweeted that it was a member of their organization.

"We sent the Monopoly Man to the Equifax hearing to send a message: Forced arbitration gives Equifax a monopoly over our justice system," the Public Citizen said.

The 'Monopoly Man' was later identified as Amanda Werner, who said to message her on Twitter if "you'd like an interview with the Monopoly Man."

As Smith was speaking, Werner repeatedly wiped her brow with money and twirled her fake mustache, which was caught on camera.

The information stolen from Equifax included names, Social Security numbers, birth dates and addresses, the kind of information that could put people at risk for identity theft.