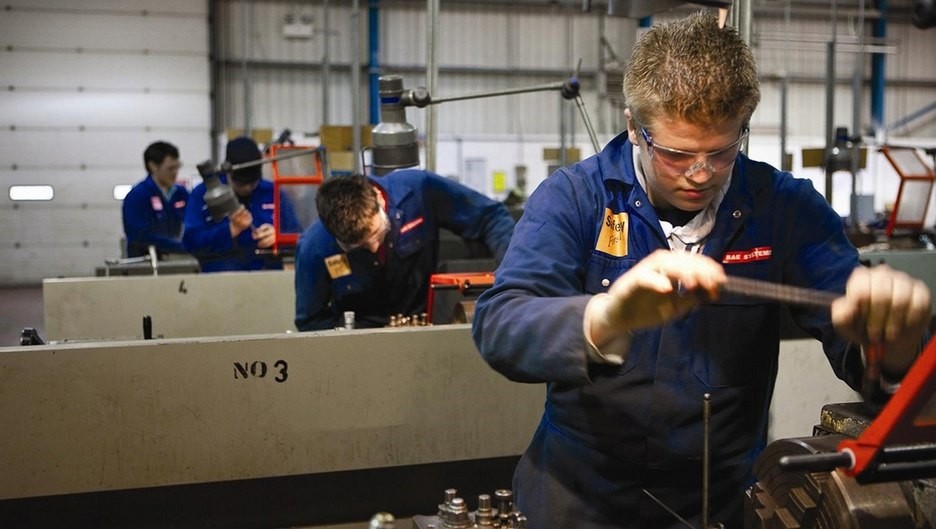 Apprentices work at the BAE Systems site in Warton, Britain. Approximately 750 positions will be cut in Warton, Samlesbury and Lancs.
by Oct 11, 2017 12:00 am

BAE Systems said yesterday it was cutting up to 1,950 jobs, with the majority of losses coming from it military air unit, where orders for its Typhoon jet have slowed. Britain's biggest defence company said up to 1,400 roles would be cut in its military air and information business, 375 would be lost in its maritime unit and 150 would go from its applied intelligence operations, mainly affecting two of its plants in Lancashire, northern England, which are involved in making the Eurofighter Typhoon fighter jet. BAE Systems, which employs 34,600 people in Britain, has already slowed Typhoon production as orders have dried up. Its Warton and Samlesbury plants, where around 5,000 people work on the Typhoon program, will suffer the brunt of the losses. The Typhoon has won fewer orders this year than the rival Rafale built by France's Dassault Aviation, although Qatar agreed to buy 24 Typhoons in September. But a major order expected from Saudi Arabia has not materialised.

It said on Monday: "BAE Systems continually reviews its operations to make sure we are performing as effectively and efficiently as possible, delivering our commitments to existing customers and ensuring we are best placed to secure future business."

"If and when there are any changes proposed we are committed to communicating with our employees and their representatives first."

Britain's biggest defence contractor will also cut jobs at its dockyard in Portsmouth, southern England, according to the Financial Times. The Unite Union said the job cuts would significantly undermine Britain's sovereign defence capability. Assistant General Secretary Steve Turner said: "The UK government can end the uncertainty surrounding the future of thousands of British BAE defence jobs at a stroke by committing to building the next generation fighter jets here in the UK.

BAE said in August that any new orders were unlikely to impact production delivery rates positively for at least 24 months, and production would be under constant review.

"We obviously have to review our (Typhoon) production demand very carefully," Chief Executive Charles Woodburn said. However, he said he remained confident about future orders for the aircraft, which is a joint project between BAE, France's Airbus and Italy's Finmeccanica.