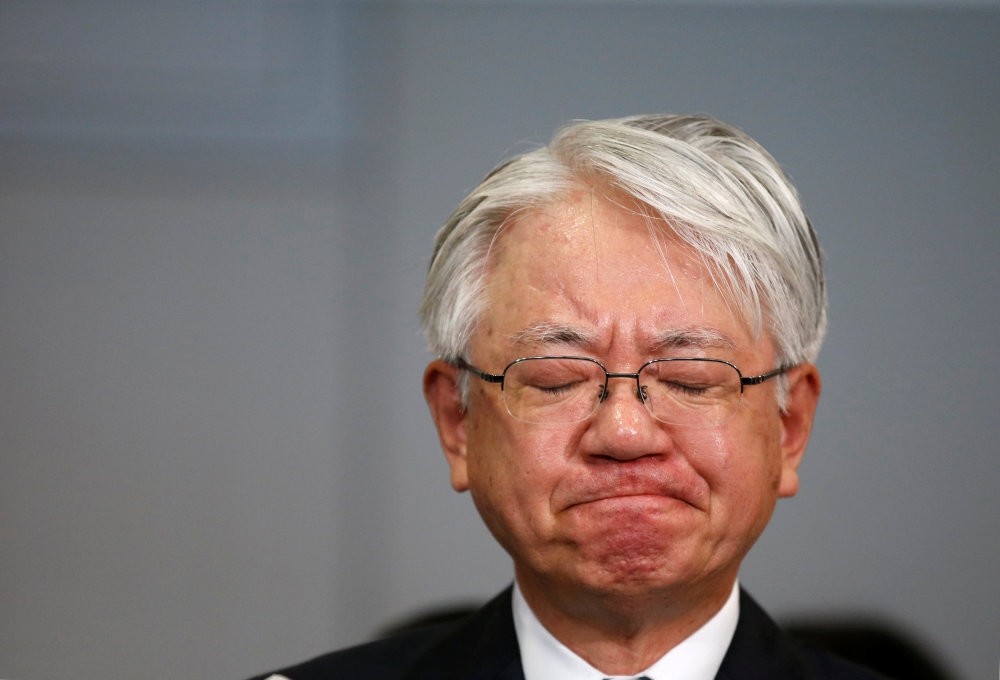 Kobe Steel President and CEO Hiroya Kawasaki speaks to the media after a meeting with Ministry of Economy, Trade and Industry's Director-General of Manufacturing Industries Bureau Akihiro Tada at the ministry in Tokyo.
by Associated Press Oct 13, 2017 12:00 am

Steel maker Kobe Steel apologized yesterday after finding wider problems, dating back to 2011, with faked inspections data for metals used in many products, including cars, bullet trains, aircraft and appliances. Kobe Steel's president, Hiroya Kawasaki, bowed deeply in a formal apology, lamenting that "Trust in our company has dropped to zero."

He promised a senior trade ministry official that the company, Japan's third-largest steelmaker, would provide results of safety inspections within two weeks and a report on the cause of the problem within a month. Akihiro Tada, director of the ministry's Manufacturing Industries Bureau, urged the company to move quickly in resolving the problems, which are thought to have affected many of the country's largest manufacturers.

The company, Japan's third-largest steel maker, said in a statement late Wednesday that it had uncovered manipulation of data on steel powder used in metallurgy and also on high-tech materials used to create films used in computer chips. The government has urged Kobe Steel to clarify the extent of the misconduct. The latest discovery was of falsification of data on 140 tons of steel powder supplied to one customer in fiscal 2016, between April 2016 and March 2017. Another case involved 6,611 items of sputtering target materials shipped to 70 customers beginning in November 2011. Kobe Steel said it had failed to carry out tests it had agreed to conduct, and improperly "rewrote" inspection data. But it said most of those materials, used to deposit thin films from various materials onto components such as computer chips, were re-inspected and are thought to have met customers' specifications.

Earlier the company said that in the year up to Aug. 31 it had sold materials such as aluminum flat-rolled products, aluminum extrusions, copper strips, copper tubes and aluminum castings and forgings using falsified data on such things as the products' strength.

The government has asked the company to provide more information about the products supplied to more than 200 Kobe Steel customers, reportedly including some of the country's biggest manufacturers, including defense contractor Mitsubishi Heavy Industries and a number of automakers. It was unclear if the total of 40,900 tons of products involved included shipments to other countries.

"Putting the utmost priority on the safety of our customers, we are rapidly working to identify which vehicle models might be subject to this situation and what components were used, as well as what effect there might be on individual vehicles," Toyota said in a statement. "At the same time, we are considering what measures need to be put in place going forward."

Aircraft maker Boeing said it, too, is looking into the problem but had no reason to believe it was a safety concern. Product quality scandals have posed a challenge to the image of top Japan's manufacturers in recent years. In one of the largest, auto parts maker Takata Corp. has paid $1 billion in penalties for concealing an air bag defect blamed for at least 19 deaths worldwide. Major automakers are also engaged in massive recalls and facing criticism for allegedly continuing to use the defective air bags despite knowing of the problem.