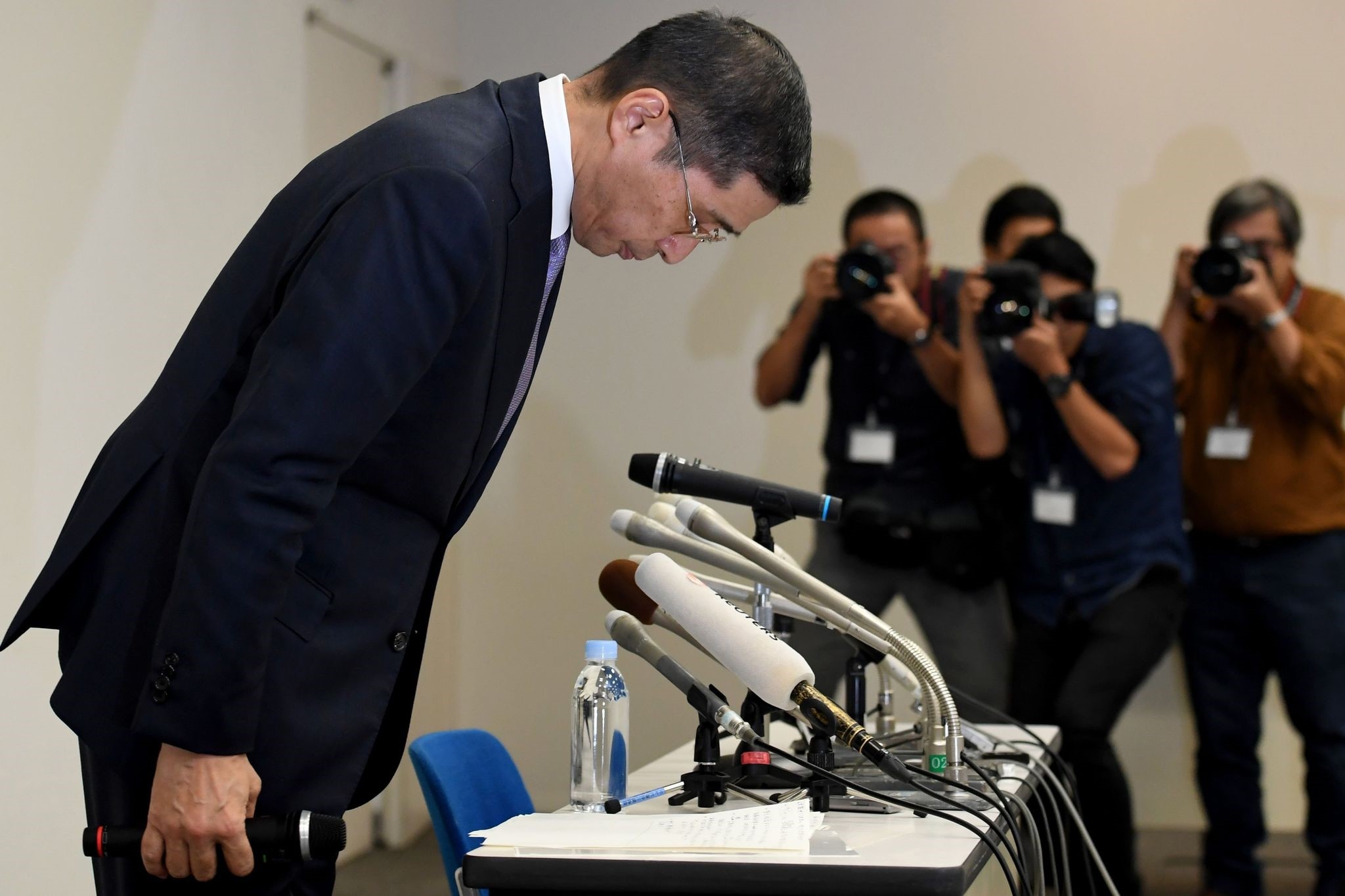 Nissan Motors CEO Hiroto Saikawa bows to start a press conference regarding the recent inspection issue in the Japanese market at its headquarters in Yokohama.
by Oct 20, 2017 12:00 am

Nissan said Thursday it was suspending all production destined for the local market, as Japan's number-two automaker grapples with a mounting inspection scandal that has already seen it recall some 1.2 million vehicles. The announcement comes weeks after the company admitted that staff without proper authorisation had conducted final inspections on some vehicles intended for the domestic market before they were shipped to dealers.

Yesterday, it said a third-party investigator found the misconduct had continued at three of its six Japanese plants even after it took steps to end the crisis, something its president blamed on "old habits". "You might say it would be easy to stop people who are not supposed to inspect from inspecting," Nissan president Hiroto Saikawa told a press briefing yesterday. "But we are having to take (new measures) in order to stop old habits that had been part of our routine operations at the factories."

"What is necessary is to make our people realise that what they thought was OK was in fact bad."

This month, Nissan said it was calling back around 1.2 million vehicles produced and sold in Japan between 2014 and 2017 for re-inspection, after government officials found some final inspections were being done by staff not certified to do them. Nissan produced 1.015 million vehicles in Japan in its last fiscal year to March, with about 400,000 units sold locally. "Those customers who trusted the measures that we took and purchased our vehicles, we violated their trust," Saikawa said. "This is a serious problem."

Saikawa, who took over the top position from Carlos Ghosn earlier this year, has said the crisis was likely to cost the firm around 25 billion yen ($222 million).

"We are trying to change what has become a part of a routine," he told reporters, adding that the suspension would likely be in force for about two weeks.

He insisted that the issue did not affect the quality of Nissan's vehicles.

"Rather than whether we are building good and safe vehicles, this is about whether steps that were supposed to be followed were followed," he added.

Nissan's original announcement in early October came just days before Japan's Kobe Steel found itself embroiled in a scandal as it admitted to falsifying quality data in products shipped to about 500 clients -- including Toyota and the country's iconic bullet trains. The back-to-back scandals tarnished Japan Inc's reputation for quality and were the latest in a string of negative headlines for the country's firms, once the envy of the world. Airbag maker Takata went bankrupt this year after spending years dealing with defective products that were linked to 16 deaths and scores of injuries worldwide. And Mitsubishi Motors last year admitted that it had been falsifying mileage tests for years.