Multidimensional cooperation at center of Turkish-Russian Media Forum in Antalya 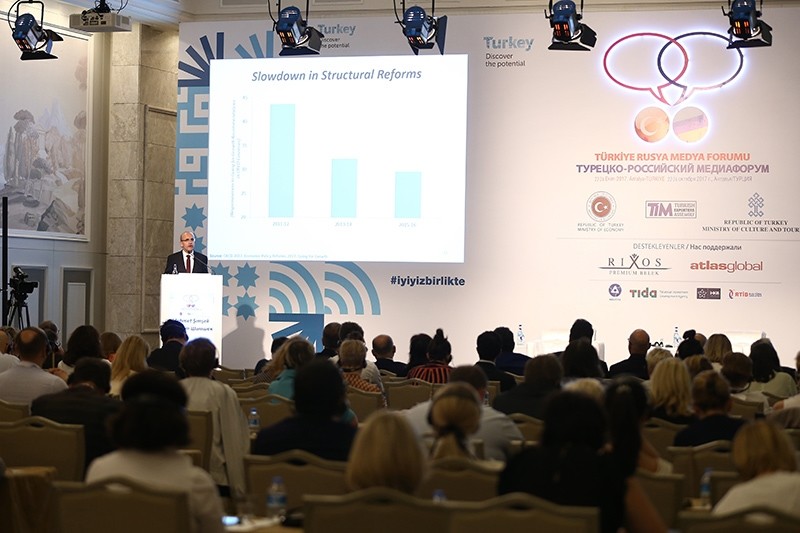 Strengthening and expanding cooperation discussed during this year’s Turkish-Russian Media Forum in Antalya, which brought together nearly 150 journalists from Turkish and Russian media

Developing closer cooperation in different fields, including culture, tourism and media, emerged as the central topic of this year's Turkish-Russian Media Forum.

The forum that is taking place in Turkey's tourism capital Antalya between October 22 and 26 was attended by Deputy Prime Minister Mehmet Şimşek, Antalya Mayor Menderes Türel, Russian Consul General Oleg Rogoza, Chairman of the Public Council of the Federal Agency for Tourism (Rosturizm) Sergey Markov and various representatives of the Turkish and Russian business world.

Representatives of both countries hailed strong relations and close cooperation between Turkey and Russia.

Boosting ties in media and culture as well as tourism were the main focus of the forum.

A TV series of joint Turkish-Russian production, 'Kalbimin Sultanı' (Sultan of My Heart), came under spotlight to mark a new page in cultural relations between the two countries.

The chairman of the Board of Directors of Maya Productions International, Burhan Özkan said Kalbimin Sultanı was an "unprecedented" synthesis of Turkish and Russian cultures. He added that with this series Turkey and Russia will take part in the global "soft power competition."

Both Russian and Turkish guest speakers expressed desire to increase not only the number of Russian tourists in Turkey but also the other way around.

According to the Chairman of the Board of Directors at Atlasglobal Murat Ersoy, for every 100 Russian tourists Turkey sends only 20. Ersoy stressed that visa liberalization for Turkish citizens would greatly facilitate an increase in two-way tourist traffic.

Responding to the topic of visa liberalization, Markov said Russia was open to discuss it as well consider passport-free travel. Although he added that certain security concerns would be a short-term obstacle.

Markov also said that Russia expected the number of tourists coming to Turkey to pass the 5-million-a-year mark in the nearest future.

Speaking on the third day of the forum on Tuesday, the deputy prime minister responsible for economy Mehmet Şimşek said Turkey wanted a strong friendship and neighborly relations with Russia.

"The more we open our markets to each other, the more the two countries will benefit. We must not be afraid of trade, investment and openness," Şimşek said, citing numerous joint projects both in Turkey and Russia.

The second Turkish-Russian Media Forum brought together nearly 150 journalists from Turkish and Russian media. The first forum was also held in Antalya in August 2016.