Largest diamond ever auctioned goes for $33.5 million in Geneva 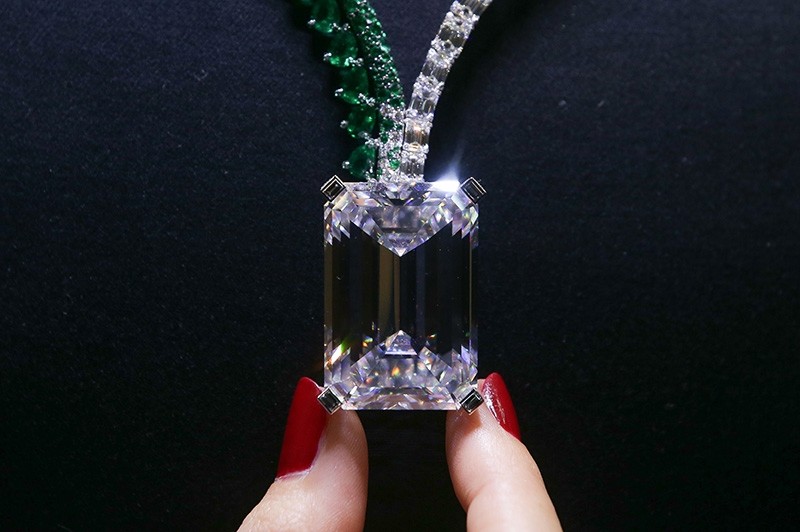 The largest diamond ever offered at auction sold for $33.5 million at a Christie's event in Geneva Tuesday evening.

The "sensational" 163.41-carat flawless diamond, suspended from an emerald and diamond necklace called The Art of Grisogono, was a highlight of the autumn jewel auction.

"To date, this is the largest D flawless diamond ever to appear for sale at auction," Christie's said when it first announced the gem would be part of its annual Magnificent Jewels sale.

The auction house had said it expected the "masterpiece of unparalleled beauty and exquisite workmanship" to fetch around $25 million (21.2 million euros).

The flawless, D colour 11A type diamond was cut from a 404 carat rough rock which was discovered in February 2016 in the Lulo mine in Angola – the 27th biggest rough white diamond ever discovered.

The rough was analyzed in Antwerp and cut in New York, where a team of 10 diamond-cutting specialists were involved in mapping, plotting, cleaving, laser-cutting and polishing the giant rough rock into a polished, flawless diamond.

A team from Swiss luxury jeweler de Grisogono then created 50 different designs around the 163.41-carat diamond, before opting for an asymmetric necklace with the stone as its centerpiece.

"It took over 1,700 hours to create this unique jewel and involved a team of 14 craftsmen," Christie's said.

The left side of the necklace is made up of 18 emerald-cut diamonds and the right side composed of two rows of pear-shaped emeralds.

"The Art of de Grisogono is one fabulous Christmas present and wallflowers need not apply," Tobias Kormind, head of 77 Diamonds, a large European online diamond jeweler, said in a statement.

Another highlight of Tuesday's auction was the "Le Grand Mazarin," a 19.07-carat light pink diamond, which was once set in the crowns of numerous French kings and emperors, including Napoleon.

The gem was named after Cardinal Mazarin, an Italian cardinal and diplomat, as well as a great art collector, who served as chief minister under Louis XIII and Louis XIV, and who bequeathed it and other diamonds to the Sun King in his will.