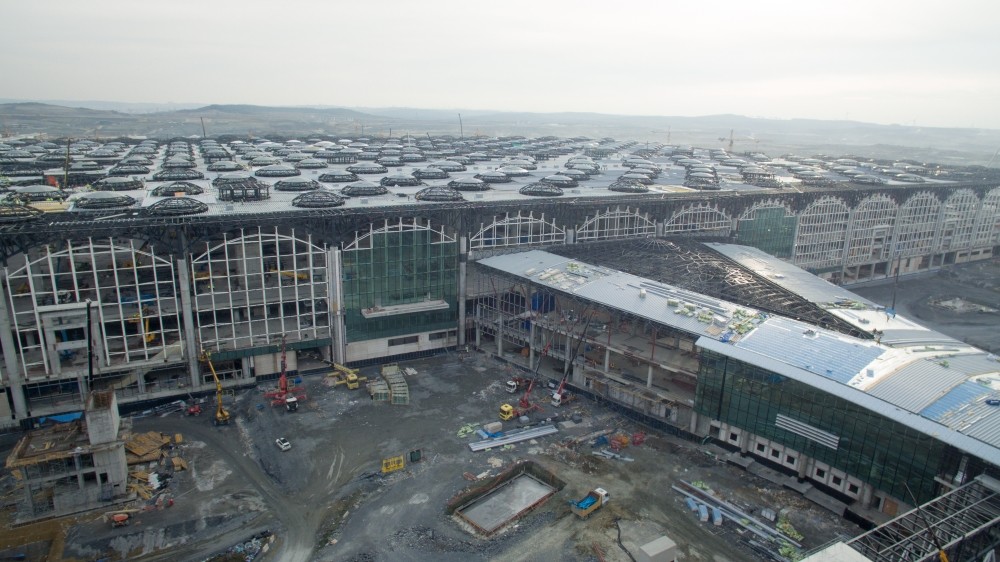 Slated to start operations within less than a year, Istanbul's new airport is 73 percent complete, aiming to achieve the goal at making the city a global aviation hub by serving 90 million passengers during the first stage

Transportation, Maritime Affairs and Communication Minister Ahmet Arslan paid a visit to the new airport construction site, which is the biggest infrastructure project in the world with an estimated investment cost of 10.5 billion euros, on Friday and said that the pace of construction is satisfactory, as currently 73 percent of the third airport is complete.

Addressing a group of journalists on the site, Arslan elaborated on the airport statistics. He said that the number of airports in Turkey increased to 55 from 26 over the course of the last 15 years while the number of passengers reached 180 million, which was 34.5 million 15 years earlier. The aim is to close the year by serving 189 million passengers.

He also noted that the Istanbul Atatürk International Airport does not deliver adequate performance to make Istanbul an aviation hub, despite the airport running at full capacity. Therefore, the new airport is planned to achieve the goal for Istanbul to become a global aviation hub. The new airport will also make significant contributions to Turkey in terms of employment and economic gains.

The first phase of the new airport, which will serve 90 million people, will be operational on Oct. 29 2018, serving locals and international travelers.

"By the end of the summer, 32,000 people were employed, but the cooling weather prevents progress on some of the work. Therefore, 30,050 people are currently working on the site," Arslan said, specifying that 4,000 are white collar employees. Toward the end of construction, around 35,000 people will be employed at the airport.

Arslan said that the airport, once finished, will accommodate 3,500 planes. Serving a total of 1,500 aircraft at Atatürk Airport is considered a record, he noted in comparison. As for the number of airways, the minister said that the new airport will have a capacity to serve 150 airlines, reaching 350 destinations.

"Istanbul's new airport will have an apron with a capacity to accommodate 371 aircraft. When all stages are completed, this will rise to 454," Arslan said, and that all aircraft will use air bridges, which is an important convenience of the new airport.

With regard to the terminal building, it has a roof of over 461,000 square meters, which equals 58 soccer fields. Moreover, the terminal will also have 6,200 rooms and 9,000 surveillance cameras.

Arslan pointed to the contribution of aviation to the country's economy and stressed that when the whole airport is complete, it will directly and indirectly create an economic size of 4.89 percent of the country's gross domestic product (GDP).

Arslan said transportation is the locomotive of all sectors, adding that with this understanding, they continue to work day and night on transportation projects in the country.

Arslan said that the airport is being built in a place with pits and swamps due to coal mines in the region, that the construction is carried out by closing these places and that the environmental sensitivity has been kept at a high level since the first day, highlighting that they have received the Environmental Impact Assessment (EIA) report even though it was not obligatory.

Referring to the projects carried out in order to protect and preserve the endemic plants in the region, Arslan said they will initially plant 2 million trees from the beginning of 2018, and with the completion of the project 5 million trees will be grown in this area.

Upon a question about whether to remove wind turbines in the area, Arslan said that there are 12 wind power plants there, that they have initiated the necessary procedures to remove them, and that they have been in talks with the Energy and Natural Resources Ministry in the process.

With regard to the projects on airport transport, Arslan said that they have launched the rail system project from Gayrettepe to the airport and tunnel boring machines have arrived. "We will soon hold a ceremony. We're making a 37-kilometer subway from Gayrettepe to here completely underground," he said. "We continue to work on the contract for the continuation of the railway system that will be connected to Halkalı, including the current Gebze-Halkalı-Marmaray main line. We have a lot of projects on land."