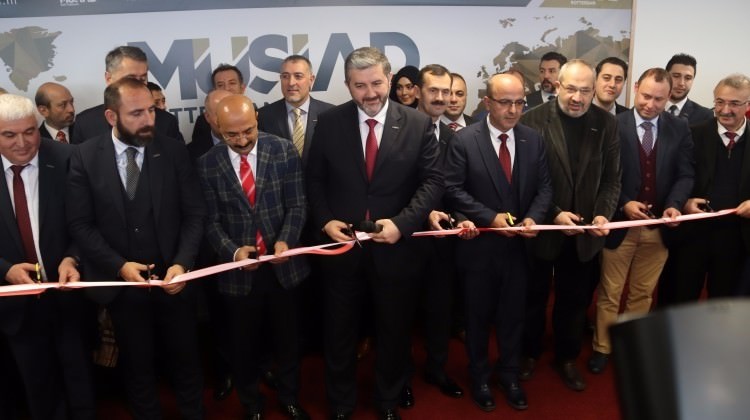 The Independent Industrialists' and Businessmen's Association (MÜSİAD) has opened three new branches on Saturday in three Dutch cities - the Hague, Rotterdam and Utrecht - within a day, in addition to a branch that was recently opened in Amsterdam.

MÜSİAD Chairman Abdurrahman Kaan said they are continuing to practice economic diplomacy with the Netherlands after a political crisis that started in March, before Turkey's April 16 constitutional referendum, when Family and Social Policies Minister Fatma Betül Sayan Kaya was prevented from entering the Turkish Consulate in the Netherlands and other programs in the country were forcibly canceled.

Stressing that they do not want to harm relations but rather capitalize on them, Kaan said, "Prime Minister Binali Yıldırım stated recently that the government is determined to maintain its relations with Europe at a normal level to achieve its EU accession goal. This is a statement of goodwill. We want to see the reflections of the same good intentions from European politicians."

There are around 25,000 Turkish entrepreneurs in the Netherlands today, and according to MÜSİAD Amsterdam Chair Ümit Akbulut, the contribution of these enterprises to the Dutch economy is about $12.5 billion.

In addition, these enterprises provide jobs for 67,000 people in the Netherlands.

Furthermore, while the distribution of this trade volume is in favor of Turkey, imports stood at $3 billion and exports amounted to $3.6 billion in 2016 between the two countries. In this respect, the Netherlands, the eighth largest economy in the world, ranks tenth among Turkey's exports.

According to Kaan, exports in the first six months of 2017 fell by 5 percent compared to the same period last year.

"It is not a matter of panic, but we have to stop and examine," the chairman said at a gala dinner in Amsterdam.

He suggested avoiding sacrificing trade relations to politics and advocated that temporary political crises should not affect economic relations.

"Europe is an important trading partner for Turkey and needs Turkey in many respects. Therefore, the normalization of our relations and avoiding making our deep-rooted relations an instrument for political strives will benefit both parties," he stated.

Stressing that MÜSİAD is represented in 184 cities across 69 countries today, Kaan said they are making great efforts to expand overseas business networks.

He stressed they are rendering important services to expand economic diplomacy and aim to further contribute to the Turkish economy by improving trade relations with other countries.

Meanwhile, Alper Yüksel, the charge d'affaires at the Turkish Embassy in the Hague, noted that considering economic relations between Turkey and the Netherlands; the two countries being among the largest economies in the world and nearly half million Turkish nationals living in the Netherlands, the inauguration of the three MÜSİAD branches was crucial.