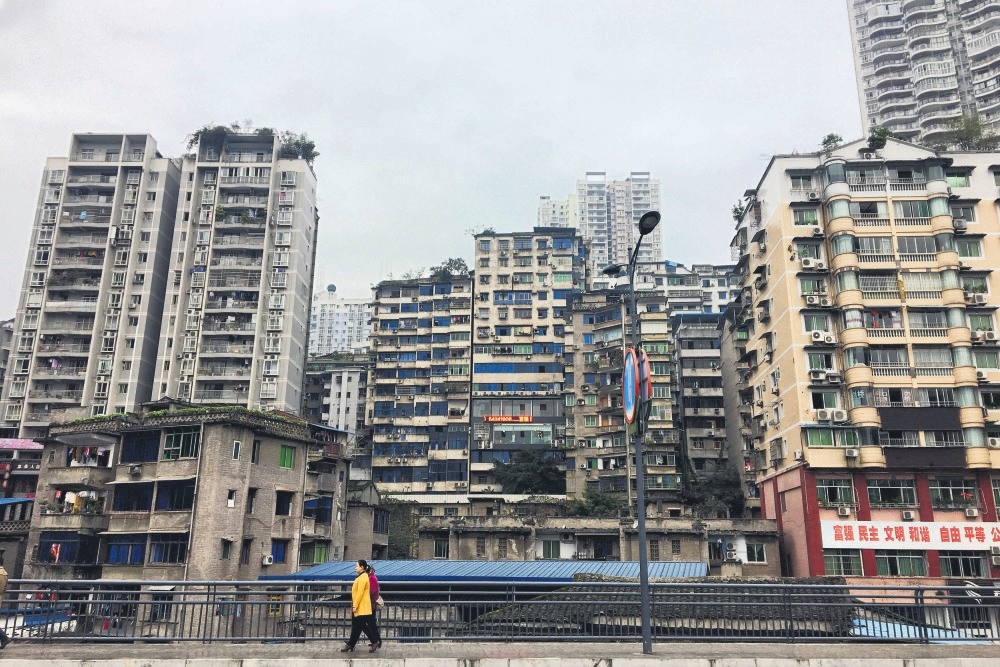 Residential buildings are seen in Zhongxian, Chongqing., whose government has a plan to reinvent its economy with a $211.6 million online gaming complex that it hopes will cash in on China's fast-growing e-sports market.
by reuters
Dec 09, 2017 12:00 am

Beijing promotes specialty towns to boost regional economies in the hinterland, but the plan also underlines the challenge it faces in trying to rein in risky debt undertaken by local governments

The first plan was for an "eco-city" that would help pull Zhongxian, a remote city on the hilly banks of the Yangtze River in southwest China, out of poverty. But after a dispute with the local government over land rights, the developers pulled out and all that remains of the green-themed project are half-completed structures and piles of rubbish. Now, Zhongxian's government has seized upon another plan to reinvent its economy: a 1.4 billion yuan ($211.60 million) online gaming complex that it hopes will cash in on China's fast-growing e-sports market. When finished, the complex will include a 6,000-capacity stadium and an incubator for gaming start-ups - and this in a town that lacks an airport or railway station.

Zhongxian, a hardscrabble city of one million people, is among a slew of towns responding to Beijing's call to create 1,000 "specialty towns" by 2020. The Chinese government is hoping to spur the development of sustainable economies around local industries in the hinterland, but the plan also underlines the challenge it faces in trying to rein in risky debt undertaken by local governments. Local governments have responded to the initiative by embracing a vast array of industries; cloud computing, chocolate-making, traditional painting and much more. Some projects involve new industries; others are based on promoting traditional ones, or developing tourist industries based on local natural attractions. While the initiative might mean some long-term growth in neglected regions, economists are also concerned about a new buildup of the kind of risky debt that Beijing has been struggling to resolve, and result in more white elephant projects across the country. Many of the specialty towns - like the one in Zhongxian - are also proceeding with projects before getting official approval, raising the risk potential, the economists say.

"On one hand, the plan can help resolve inequalities in regional development, but on the other, lots of people are taking specialty town funds and creating a fiscal mess," said Gao Wei, a Beijing-based analyst at the Centre for China and Globalization. China's state planning authority, and the housing, land and environmental protection ministries, on Tuesday issued new guidelines for specialty towns, citing growing risks from local government debt and an over-emphasis on property development. Guo Li, a Zhengzhou-based independent city planning specialist, calculates there are as many as 6,000 specialty towns in the works.

Based on the typical announced investment of 3 billion yuan, Guo said, total investment may be about 18 trillion yuan.

Zhongxian raised funds through a proxy company set up by the city's finance bureau, according to the company's official registration information. Such companies - known as local government financing vehicles - can be used to skirt restrictions on borrowing by local governments. However, regulators have raised concerns about the system's lack of transparency.

Other specialty towns have turned to the so-called public-private partnerships preferred by Beijing, drawing investment from private companies. However, the authorities have expressed concerns that some local governments are using the partnerships as "disguised channels" to increase debt. Plans to rejuvenate the comparatively poor hinterland and narrow a divide with prosperous coastal regions have mushroomed under President Xi Jinping, who is ratcheting up pressure on local officials to find equitable, cleaner and more sustainable drivers for China's slowing economy. His statement was seen by experts on Chinese politics as a significant policy shift that will push officials to focus on sustainable development in neglected areas and kick efforts like the specialty town initiative into overdrive. The new specialty towns, by contrast, are government mandated and normally require approval from the provincial government and central entities, including the housing ministry and state planner. The towns are usually limited to a three-square-kilometer zone dedicated to the industry of choice.