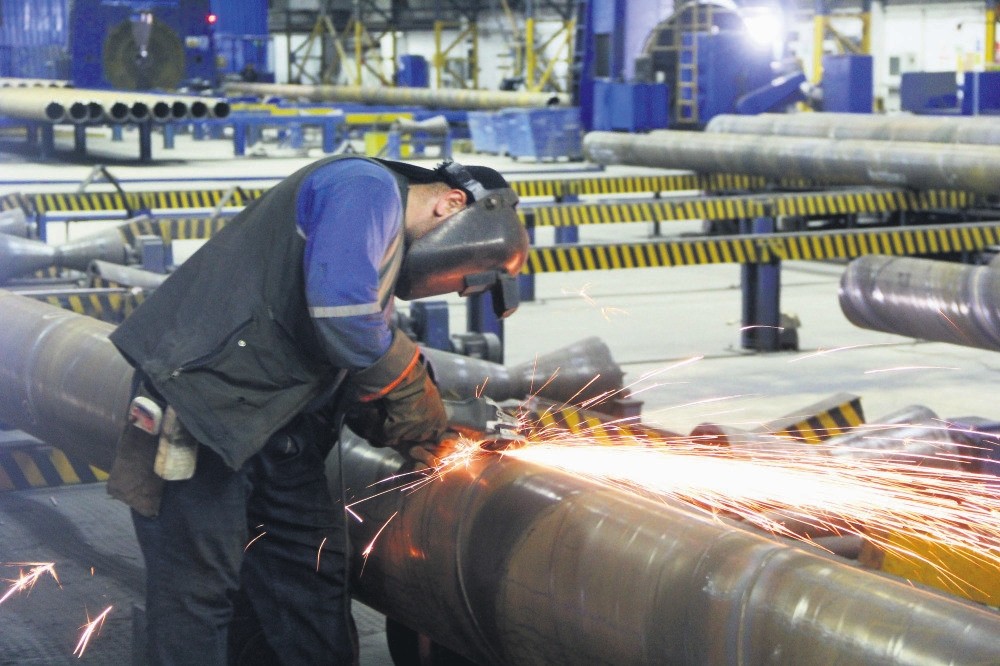 Around 7,500 exporting firms received TL 27.5 billion in loans from the Credit Guarantee Fund for financing their operations while a big portion of total TL 220 billion CGF loans went to manufacturing.
by Hazal Ateş Dec 19, 2017 12:00 am

Considered an important catalyst for the Turkish economy, the Credit Guarantee Fund has so far provided TL 220 billion in loans for the real sector, the most among its counterparts in the world, while preparing to continue support with TL 140 billion next year

Turkey's Credit Guarantee Fund (CGF) provided TL 220 billion ($57.20 billion) in loans for the real economy between March 2017 and November 2017, placing it top among its peers in the world.

"Around 64.2 percent of the companies that benefited from CGF loans are rated A or B," Gergerli said.

He added that the state-lender, Halkbank, gave out more than TL 20 billion in loans for the real sector, and the fund is planning to provide TL 140 billion next year to continue supporting the Turkish economy.

Though the fund has a 26-year history, it only boosted efficiency and improved its support for the Turkish real sector over the last couple of years. Since 2015, the total value of the treasury-backed transactions has reached TL 1.8 billion.

To facilitate the approval procedures for loans and allocate them on a solid basis, the fund has established a rating system that scans and reviews applications within 24 hours.

In the past, only 1,000 firms were able to benefit from the fund, but currently it can provide loans to 4,000 enterprises every day, Gergerli said.

"The CGF does not only provide financing for enterprises operating in the real sector, but it eases the access to affordable loans that do not place an extra burden on debtors.

"The regulations of the Banking Supervision and Regulation Authority (BDDK) stipulate that the cost of funds for CFG loans be zero in equity ratio calculations, which eliminates the risk premium. Therefore, the CGF acts as a medium to minimize the interest rates," he said.

He underscored that the third quarter growth data of 11.1 percent and the 15.2 percent increase in the machinery and equipment investments suggest that growth will likely continue in the next five quarters.

Gergerli said the fund has provided a total of TL 220 billion in loans to some 365,000 companies. A significant chunk of these loans went to manufacturing, exports and tourism operations. Around 7,500 firms in the financing sector received TL 27.5 in loans, while the tourism sector obtained TL 6.2 billion. At the same time, 220 exporters received TL 1.8 billion through the Eximbank. Almost 84 percent of the loans were provided in Turkish lira and the remaining 16 percent was provided in euros or dollars.

He added that countries, including Azerbaijan, Uzbekistan, Jordan and Tunisia, ask for Turkey's support to establish a similar model in their countries. The Islamic Development Bank (IDB) has also requested cooperation.

"If we are able to accomplish an interest-free loan system, something we are currently working on, Islamic countries will also want to make use of it," he said.

Pointing to the Turkish economy's success, Gergerli said nonperforming loans (NPL) in the banking sector dropped from 3.20 to 2.90, while walked-out checks fell to 1.80 percent from 4.30 percent, adding that Special Drawing Rights (SDR), the most important rate determining the credit appetite of the banks, increased from 15.7 percent to 17.20 percent. At the same time, the Borsa Istanbul index also maintained a trend from 70,000 toward 110,000.

"The growth rate has reached 11 percent from around 5.3 percent. The industrial production index rose from about 117 to 135, while the confidence index of $13 billion to $14 billion is rising," Gergerli said, adding that there was only an upward trend in inflation.

He also said employment figures increased by 1.5 million due to credit expansion and companies' leaning toward new investments.

"I think next year the growth will be at least as high as 2017," Gergerli said.