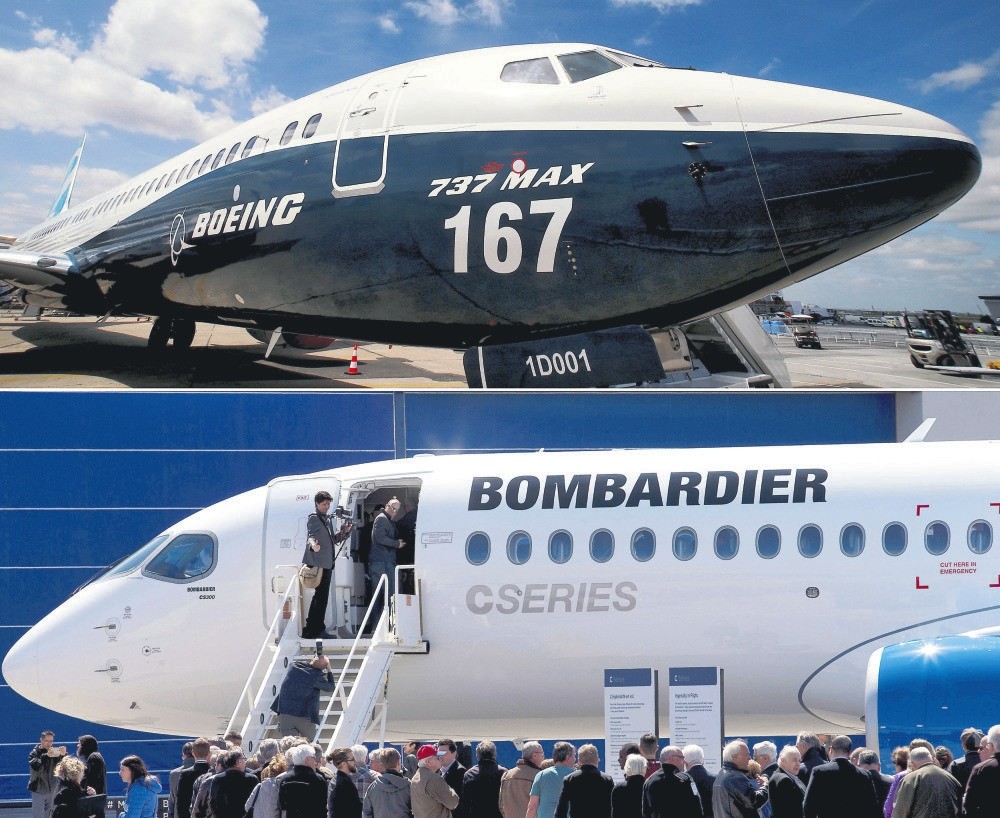 U.S. trade officials are expected to confirm massive tariffs on Bombardier planes Tuesday in a case that has inflamed relations between Washington and Ottawa. The trade dispute stems from a complaint by U.S. aerospace giant Boeing against its Canadian rival that found a receptive ear in President Donald Trump, whose "America First" agenda has included taking a tough line in matters of international commerce. Boeing argues that Bombardier signed a deal to sell its new single-aisle CS 100 planes with a price tag of just $19.6 million each, far below the $33.2 million construction cost, and a pittance compared with the list price of $79.5 million -- though that amount is almost never paid.

Bombardier was able to underprice the jets due to $3 billion in unfair government subsidies, Boeing says. Earlier this fall, the U.S. Commerce Department sided with Boeing in a pair of preliminary decisions, proposing nearly 300 percent anti-dumping duties on the planes, which are under contract to Delta Air Lines. Bombardier and Boeing argued their cases Monday before the ITC, an independent, quasi-judicial U.S. agency. Investigations "established beyond question that Bombardier has taken billions of dollars in illegal government subsidies to prop up its C Series program," Boeing said after the hearing.

"The C Series would not even exist at this point but for those subsidies," Boeing said, adding that the support enabled the company "to dump aircraft into the U.S. market at absurdly low prices." Bombardier calls Boeing's criticism unfounded, saying that the U.S. company's entire case has been overtaken by events. In October, shortly after the preliminary tariffs were announced, Boeing archrival Airbus took a majority stake in the C-Series program, announcing that the planes would be built at the Airbus plant in Mobile, Alabama.

The partnership with Airbus means there is "no chance Boeing will be harmed by imports," said Mike Nadolski, vice president of public affairs at Bombardier. Bombardier also has argued that Boeing does not manufacture a direct competitor to the CS 100, which seats 100 to 150 people, and that its robust order book of 737 planes proves it is well positioned commercially and has not been adversely affected by unfair trade. The criteria of material injury to a U.S. company is the usual standard for Washington to launch a trade case and impose punitive duties on a particular import. The case has been a sore point in U.S.-Canadian relations.

"Attempts by Boeing to put tens of thousands of aerospace workers out of work across Canada is not something we look on positively," Trudeau said in October after pressing Trump on the matter. Trudeau's government had planned to purchase 18 new Boeing Super Hornets to replace its aging F-18 fleet, but scrapped the deal following Boeing's complaint against Bombardier. Boeing suffered another setback last week when Delta announced it was ordering 100 Airbus planes to renew its narrow-body fleet in a move that analysts viewed as a snub of Boeing over the case.