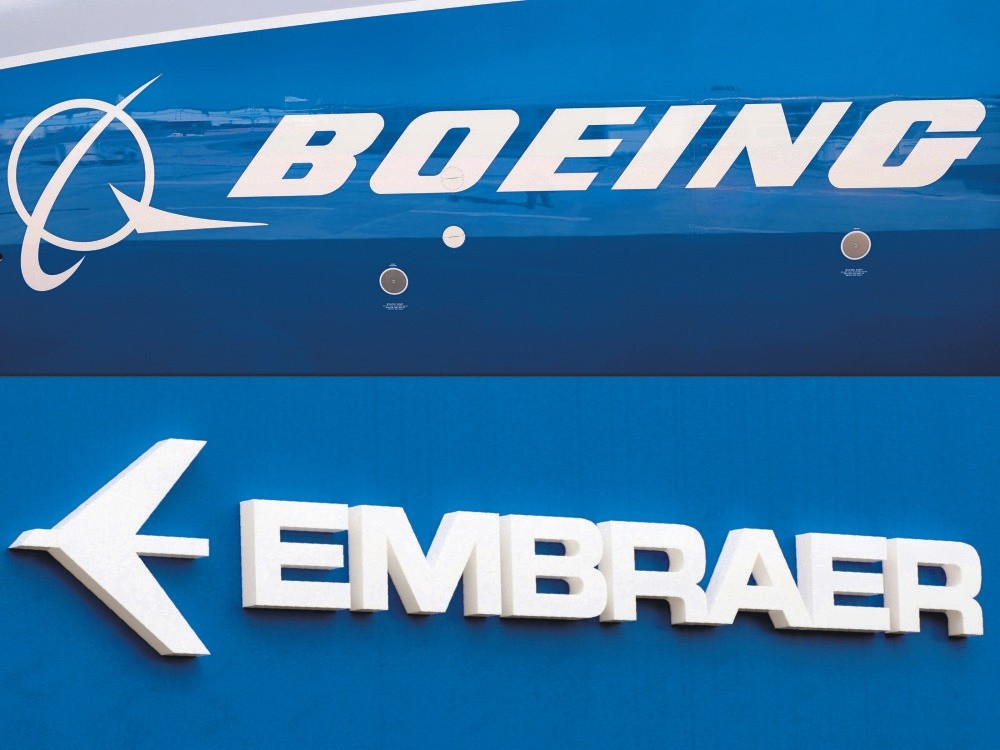 Jetmakers Boeing, Embraer are in talks over an unspecified combination. The move is seen as a response to Airbus's tie-up with Bombardier C Series. Alliances could prepare the next generation of single-aisle jets

Airbus and Boeing are pairing with smaller regional rivals to add sales at the lower end of their $100 billion-a-year commercial plane duopoly, but the two market leaders are also laying the foundation for a longer-term strategic contest against more powerful threats such as China. U.S. planemaker Boeing Co and Brazil's Embraer SA are discussing a "potential combination" widely assumed to focus on jetliners, confirming a report in the Wall Street Journal. News of the talks comes just two months after Boeing's European archrival Airbus agreed to buy a majority stake in Bombardier Inc's 110 to 130-seat CSeries jet, the Canadian rival of Embraer's biggest E-Jets.

"This seems initially to be about blunting the offering of the CSeries," said consultant Jerrold Lundquist, managing director of The Lundquist Group, one of the first industry-watchers to predict the move. "One of the things the CSeries brings to Airbus is the ability to offer a broader product line."

Both Embraer's E-Jets, which generally range between 70 and 130 seats, and to a greater extent Bombardier's CSeries, overlap at the margins of the big-airplane portfolios of Airbus and Boeing, but the products are mainly seen as complementary. Boeing and Airbus smaller planes start at around 125 seats. Such commercial tie-ups allow planemakers to offer package deals and expand opportunities for generating revenue and profit, a person familiar with the CSeries deal said. Boeing now appears to be a convert to this approach after initially - at least in public - dismissing the deal between Airbus and Bombardier, several analysts said on Thursday. But the proposed alliances, neither of which is finalised, are not simply about tacking on revenue and cash flow, analysts and industry sources said. First, they could quickly lead to technical overlap.

"If Boeing begins to collaborate with Embraer, you could imagine them creating commonality in the Boeing cockpit," Lundquist said. Others see similar benefits at Airbus.

More importantly, they broaden the battlefront for the next round of developments in 2030 and beyond: one in which Western jetmakers will be up against growing competition from China and Russia and could rely on their new partners to spread the risk. Boeing and Embraer had already prepared just such a tryst in confidential talks over a decade ago.

In October, Reuters reported that the template for a possible Boeing-Embraer response to the Airbus-Bombardier deal already existed in dormant plans for a new generation of single-aisle planes, for which there had been a previously unreported collaboration between Boeing and Brazil. Plans for an all-new plane were put on hold while Boeing and Airbus focused on engine makeovers for existing models, cashing in on fuel savings that were considered strong enough to hold off Chinese and Russian competitors for another 10 or 15 years. But the blueprint for deeper co-operation between Embraer and Boeing remained in place and by breaking the status quo, Airbus's Bombardier deal may have brought it back to life.

"Embraer gives Boeing access to technology for smaller jets for application on a next-generation narrowbody aircraft," Morningstar analyst Chris Higgins said in a research note. A source with knowledge of the matter said Boeing had already approached Embraer twice about a potential deal in 2002 and 2006. At the time, the Brazilian government vetoed any deal, saying Embraer was a "strategic" company for the country. Brazilian President Michel Temer, who took office last year, has pushed a more market-friendly agenda than predecessors. Deals with their smaller cousins may give Airbus and Boeing more options when they develop the successors to the best-selling Boeing 737 and Airbus A320, perhaps allowing them to offer a trio of large jets coupled to a pair of smaller ones.