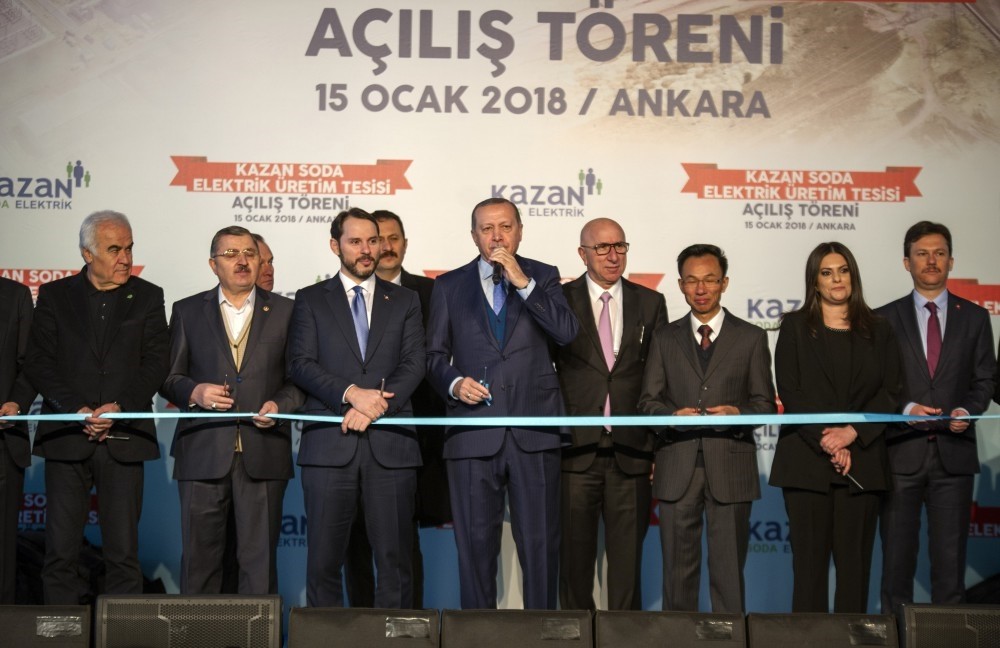 New soda ash production facilities in Ankara, which has an investment cost of $1.5 billion, will contribute to the reduction of Turkey's current account deficit by boosting the country's exports

The first 15 days of 2018 have witnessed the opening of a $1.5-billion investment in Turkey's capital Ankara. One of the world's largest soda ash production facilities, Kazan Soda Elektrik Üretim A.Ş., which will be the world's largest mining solution and Turkey's biggest cogeneration plant with 380 megawatts (MW) and 400 tons of steam production, opened yesterday with a ceremony attended by President Recep Tayyip Erdoğan and Energy and Natural Resources Minister Berat Albayrak (L). A subsidiary of one of Turkey's largest groups Ciner Group, Kazan Soda Elektrik Üretim A.Ş. will be the biggest heavy soda ash and sodium bicarbonate producer in Europe and will export its entire production.

Speaking at the opening ceremony, President Erdoğan said the facility encompasses mining, chemicals, and power generation operations and the $1.5 billion investment will provide jobs for 2,200 people. "Turkey meets 10 percent of the world's soda ash needs and Europe receives 50 percent of its soda ash needs from Turkey," the president noted. Emphasizing the strategic importance of soda production, Erdoğan said the product is used in a wide array of sectors including glass manufacturing, detergents, and livestock forage.

Also known as sodium carbonate, soda ash is the 10th most commonly used chemical in the world. It is generally used as a raw material in the production of glass, detergents, and cleaning products and as an additive in food, pharmaceuticals, chemicals, and metallurgical applications.

During his speech at the inauguration ceremony, Energy Minister Albayrak expressed his satisfaction that 2018 started with this important investment being put into action and pointed out that crucial infrastructural actions are underway in the framework of the National Energy and Mining Strategy announced in April 2017.Emphasizing that, as a country that imports $55 billion of energy and mining annually, they have set very important targets in terms of decreasing dependency, Albayrak said that in 2017, they commissioned a production facility in electricity production with a record capacity of 8,222 MW with a value of more than TL 35 billion ($9.2 billion), most of which belongs to the private sector.

"When we look at the investment point of TL 7 billion we have invested in the electricity transmission and distribution infrastructure, we closed the year 2017 with a total investment of TL 42 billion, which can be regarded as the record of the Republic's history," he said.

Albayrak also said in addition to two floating liquefied natural gas (LNG) storage and regasification units in the natural gas field, they also carried out a capacity increase of the LNG terminals, indicating that Turkey has secured an infrastructure with which it could meet the record requests without interruption.

Albayrak hailed 2017 as a successful year for oil and natural gas exploration and said the Turkey's first drilling ship will be sent to the Mediterranean Sea for offshore oil and gas exploration in the region as soon as possible, Albayrak said.

The country has already undertaken oil and gas exploration using two seismic ships, but the vessel will be the country's first active drillship.

The South Korean vessel was produced in 2011. It is 229-meters long and is capable of drilling to a maximum depth of 12,190 meters.

Energy Minister Albayrak also emphasized that 2017 was a crucial year in terms of renewable energy, which benefitted from the Renewable Energy Resource Area (YEKA) strategy included in the national energy and mining policy. Turkey contracted one solar and one wind power plant, each with a capacity of 1,000 MW, under the YEKA model. "We will uninterruptedly continue YEKA operations in order to make Turkey a center of wind and solar power technologies," Albayrak said.

Turgay Ciner, Ciner Group chair, highlighted that Turkey has become the world's largest soda ash producer with the Kazan Soda Elektrik Üretim A.Ş. Recalling that the construction of the facility began in 2015 and was completed in a two-and-a-half years, Ciner said, "The soda ash that is produced in our Kazan Soda and Beypazarı Soda Ash facilities are exported to countries around the world and provide a $800 million net foreign currency inflow into Turkey.

The production facility, which will meet 14 percent of the world's total natural soda ash needs, will contribute greatly to the closure of Turkey's current account deficit with its domestic and national production.

Kazan Soda Elektrik's mining unit will provide a trona solution, which is the raw material of the process. The trona ore, which is laid at an average depth of 600 meters in the mining plant, will be dissolved with a hot water injection to be made from opened production wells, and the trona solution will be obtained. It is the most widespread of the soda minerals which are naturally available. It is the underlying raw material used in the production of soda ash.

Trona, which is found in the Kazan and Sincan district borders of Ankara, is extracted in the form of a solution with solution mining that is a safe and environmentally-friendly mining technique. Turkey has around 900 million tons of exploitable trona reserves, and is in second place in the world in this respect.