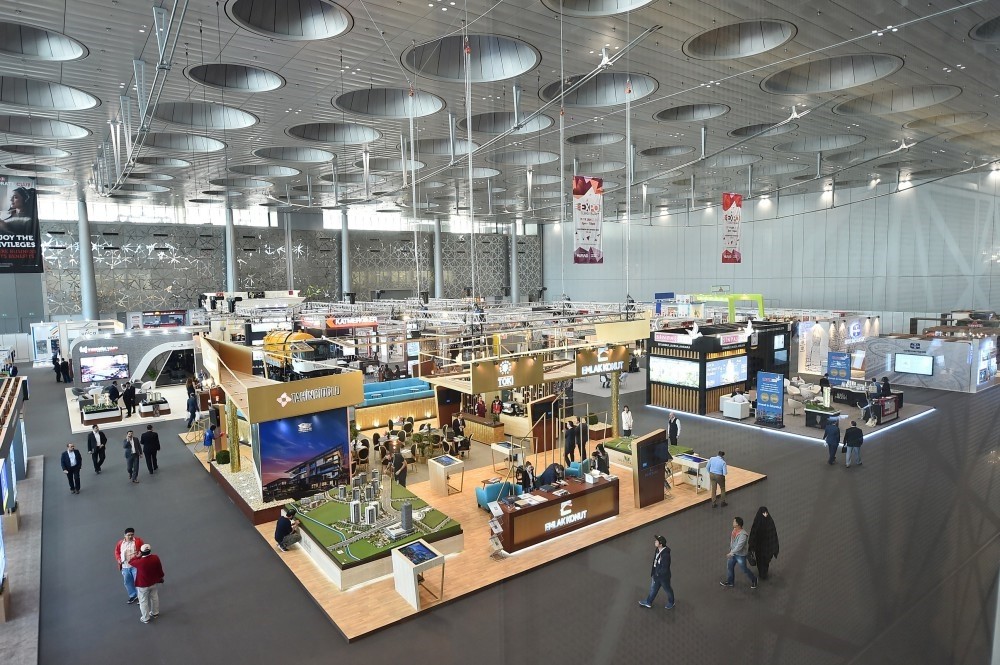 Expo Turkey by Qatar, which is playing an important role in boosting the economic ties between the two countries, has facilitated 1,600 business meetings and the signing of more than $60 million in exports agreements on its first day

The first day of the second Expo Turkey by Qatar, which started in Qatar's capital Doha with the participation of 112 participating Turkish companies, has facilitated more than 1,600 business meetings and the signing of more than $60 million in export agreements. During his speech at the fair, which was organized by MedyaCity in main partnership with the Independent Industrialists' and Businessmen's Association (MÜSİAD) and held at the Doha Exhibition and Convention Center (DECC), Customs and Trade Minister Bülent Tüfenkci underscored that Turkish firms expanded their reconnaissance of the Qatari market at Expo Turkey, noting that this country has a great interest in Turkish goods and companies and that the fair would contribute to Turkey's exports.

"We should also take advantage of these opportunities as a country. We must sign projects together that will enhance permanent and sustainable cooperation. We have to be permanent by learning how to do business here," Tüfenkci said. Commenting on positive discrimination for Turkish companies in Qatar, Tüfenkci said Qatari authorities had told them that they would "give priority to Turkish firms," indicating that the Qatar Chamber of Commerce and Industry was carrying out work in this regard.

Pointing out that political relations between the two countries, initiated under the leadership of President Recep Tayyip Erdoğan, have come to an excellent point today, Tüfenkci said this political climate should also be assessed.

Tüfenkci stressed that within the scope of the 2022 World Cup to be held in Qatar, there are very serious opportunities in this country from infrastructure and superstructure projects to the furniture sector.

Turkish firms to be given priority

Commenting on the question whether Turkish companies would undertake any projects for the 2022 World Cup to be held in Qatar, he said: "They personally said they would give priority to Turkish companies. Our companies, such as Doğuş, TAV and Tekfen, are already carrying out meetings and doing important projects in this regard. Turkish firms are realizing a project of around $14.5 billion, and this will increase even further."

He recalled that at the time of the embargo imposed on Qatar, Turkey acted quickly and sent food aid to the country, stressing that they want this transaction to be sustainable. The minister also stressed that the estimated trade volume between the two countries reached $900 million in 2017, though the official tally may raise the total even further.

Qatar's Minister of Economy and Commerce Sheikh Ahmed bin Jassim bin Mohammed Al Thani, said the relationship between the two countries is improving day by day and that they will further develop their cooperation.

"Qatar's door is always open to Turkish companies," Al Thani said. "We are expecting Turkish investors. We will proceed in at least six or seven sectors, not just a couple of areas. We also give priority to Turkish companies, and we are evaluating new privileges in the upcoming period."

Hakan Kurt, chairman of Medyacity, which organized the fair in Qatar, noted that the fair has created opportunities between the two countries. Recalling that the fair was organized for the first time last year and attracted overwhelming participation from both Turkey and Qatar, Kurt said leading Turkish companies in the real estate, construction, building materials, informatics, food, health tourism, machinery and transportation sectors participated in this year's fair, which was organized in main partnership with MÜSIAD, one of Turkey's most important business organizations.

"With the second Expo Turkey by Qatar fair we aim to increase the annual export volume between the two countries to $5 billion in the following years and annual direct investment to $3 billion along with the support of leading companies from seven major sectors," Kurt added.

MÜSIAD President Abdurrahman Kaan said Qatar, out of the other Gulf countries, holds a special place for Turkey. "Our relations with Qatar, which are getting stronger today, have reached an important commercial dimension," Kaan said, indicating that the trade volume between Turkey and Qatar rose from $408 million to $710 million over the last decade.

Kaan highlighted that Qatar is the richest country in the world, given its per capita national income, adding that the confidence and stable environment provided for the business world plays a major role in Qatar's recognition as an important and valuable trading partner. "Today, we are talking about Qatar, one of the countries that has invested about $335 billion in more than 100 countries. It has managed to use its resources in the best way possible and made the most investments in education, despite its half-century history," he continued. "This is a commendable success. Considering the commercial relations between Turkey and Qatar, we see a positive picture as well."

'We aim to raise the export volume to $5 billion'

Underlining that commercial relations between the two countries will become even stronger with the second fair this year, Kaan said the fair, attended by 112 Turkish companies, will open doors to new investments and cooperation, as well as renew ties for investors already familiar with each other from mutual investments and successful projects in the past. He suggested that with prominent organizations such as these, the export volume between the two countries will reach $5 billion, while annual direct investment will rise to $3 billion.

Kaan emphasized that Islamic countries do not attach enough importance to technology and innovation. "As Muslim countries, we have to make a move in information and technology that will not lag behind the rest of the world," Kaan said, noting that it has become a necessity for Islamic countries to establish a qualified workforce and take their places among the countries with a competitive economy through technology-based production. He added that investments in research and development should be promoted, and projects carried out in this direction should be supported to achieve these goals.

"We, the businesspeople, are aware of the potential of Muslim countries, especially Turkey, and I would like to say that as MÜSIAD, we are always ready to do our best to reveal this potential," he added.