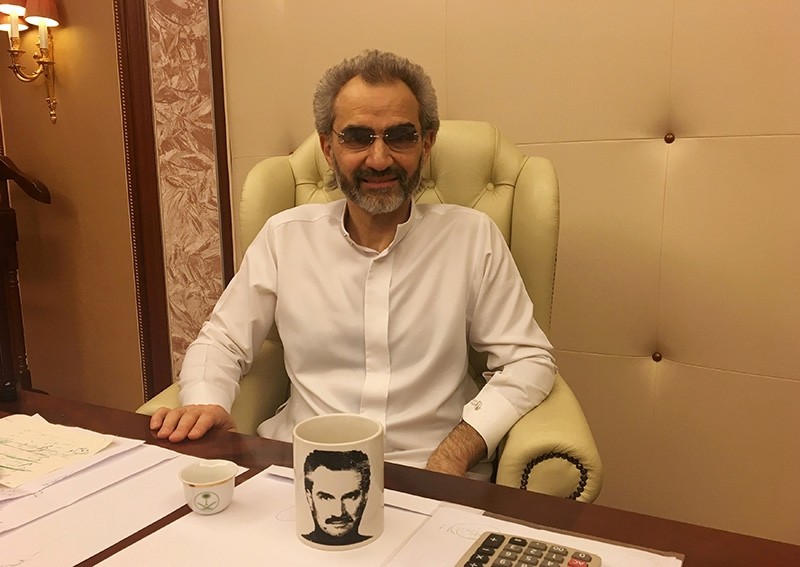 Saudi Arabian billionaire Prince Alwaleed bin Talal sits for an interview with Reuters in the office of the suite where he has been detained at the Ritz-Carlton in Riyadh, Saudi Arabia January 27, 2018. (Reuters Photo)
by Feb 01, 2018 12:00 am

Saudi Arabian billionaire Prince Alwaleed bin Talal is back on the job as chairman of global investment firm Kingdom Holding after being released from detention in an anti-corruption campaign, the company said on Thursday.

Prince Alwaleed, one of the country's top international investors, was freed on Saturday, nearly three months after being taken into custody along with dozens of senior officials and businessmen on the orders of Crown Prince Mohammed bin Salman.

Most detainees have been released, after settlements secured just over $100 billion from members of the elite, the attorney general has said, without providing details.

In his first interview since being detained, conducted hours before his release, Prince Alwaleed told Reuters he maintained his innocence and expected to keep full control of his firm .

A senior Saudi official would not confirm that claim but said any settlements included an admission of guilt.

In the absence of more information, speculation has run rampant about whether Prince Alwaleed secured his freedom by handing over part of his fortune - previously estimated by Forbes magazine at $17 billion - or stood up to the authorities and won.

He and other tycoons face a challenge to get back into the swing of running their financial empires in the uncertainty hanging over the business community since their detention.

Their ability to do so could make it harder for Saudi Arabia to attract foreign investors to big projects, an important part of Crown Prince Mohammed's grand vision to transform the kingdom and reduce its dependence on oil.

In the first few days after his detention, Kingdom Holding's share price plunged 23 percent, erasing $2.2 billion of his personal fortune on paper.

After a jump this week, the stock has regained almost all that it lost, but during his detention the overall stock market rose 10 percent. Kingdom shares do not reflect that gain, suggesting investors are still discounting the stock.

Kingdom published a photo of Prince Alwaleed reviewing documents behind a large wooden desk and still sporting the grey beard he grew in detention.

"We are very pleased to welcome back (His Royal Highness) Prince Alwaleed to continue his important work as Chairman of Kingdom Holding Company," Chief Executive Talal Almaimansaid said.

The firm's strategy is aligned with the Vision 2030 reform agenda "to create strong investor appeal and a business environment in which KHC and our partners can flourish", he added.