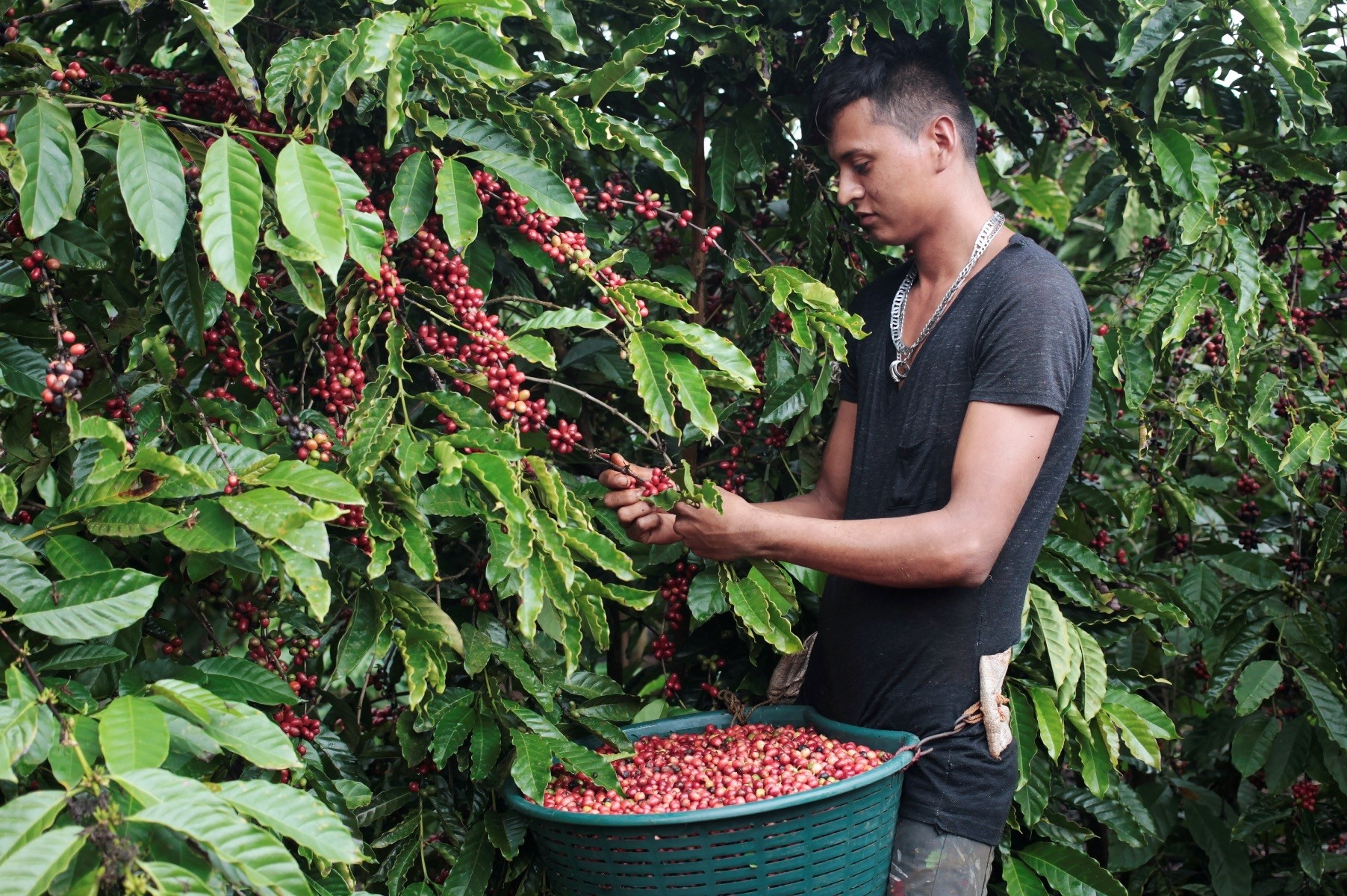 A worker harvests robusta coffee fruits at a plantation in Nueva Guinea, Nicaragua.
by Feb 08, 2018 12:00 am

A growing number of farmers in Latin American nations renowned for their high-quality arabica coffee are starting to plant cheaper robusta - a crop still frowned upon or even outlawed in some countries. In locales such as Colombia and Costa Rica, many in the industry have feared the low-brow bean will spoil their reputation as suppliers of the world's best coffee. Costa Rica bans robusta farming entirely, while coffee trade organizations in Colombia and elsewhere have historically discouraged it. But a growing number of Latin American farmers are warming up to the bitter bean as a cash crop.

"It has good productivity and a good price," said Evelio Matamoros, a farmer in Nicaragua who first planted robusta in 2010. Robusta "has better yields and it doesn't need shade. That matters."

Robusta, which thrives at lower elevations, is typically processed into instant coffee or added to brewed blends as a cheaper ingredient. It's also used to create the froth in some espressos. Coffee producers from Colombia to Guatemala are dedicating more land to robusta, and it has even spread to Panama, a small country renowned for growing exceptionally high-quality arabica beans that fetch steep premiums. In Nicaragua and Guatemala, the industry has targeted robusta expansions that would increase their combined harvest by five times, to about 540,000 60-kg bags. That would account for nearly 1 percent of global output, and bring supplies closer to North American coffee makers, cutting freight costs and shipping time compared to major robusta-growing nations such as Vietnam and Brazil.

The expansions of robusta in arabica-growing nations appears well-timed. Demand for all coffee worldwide is on track to reach a record this year, according to the U.S. Department of Agriculture, and robusta supply hit a six-year low last year, after a drought hurt Brazil's crop.

In November, Olam International Ltd, a major agri-business that trades food globally, forecast the world's robusta production will fall short of demand for the second straight crop year in 2017/18, creating a cumulative two-year deficit of 8 million bags. Changing climates are also making robusta farming more attractive. The crop survives better at warmer temperatures, and it has enough caffeine to make its trees hardier against some diseases and pests.

Farmers growing arabica in Central America were hit hard by the spread of an airborne fungus known as roya in 2012. In low-lying areas, which are more susceptible to roya, some producers are now looking to robusta as an alternative crop because many varieties are resistant to the fungus and less costly to grow than arabica. Arabica, typically grown at high altitudes and roasted for brewed coffee, accounts for roughly 60 percent of the world's beans. Ro

busta accounts for the rest. Robusta sells at a discount of roughly 40 cents per lb to the benchmark arabica price, as the cheaper bean typically has lower input costs. The efforts to increase - or in the case of Colombia, to begin - robusta production signals increasing acceptance of the bean. In 2013, Colombian farmers - worried about the nation's brand as world's biggest grower of premium arabica coffee - opposed President Juan Manuel Santos when he raised the idea of growing robusta in the country's plains. But now some Colombian farmers are planting the lower-quality crop in lowlands that are unsuitable for arabica. In Costa Rica, it has been illegal to grow robusta since 1988, and farmers who grow it could have their crops destroyed without compensation. Farmers in Honduras - Central America's biggest coffee grower - chose not to grow robusta to maintain tradition and quality, the country's coffee association said.