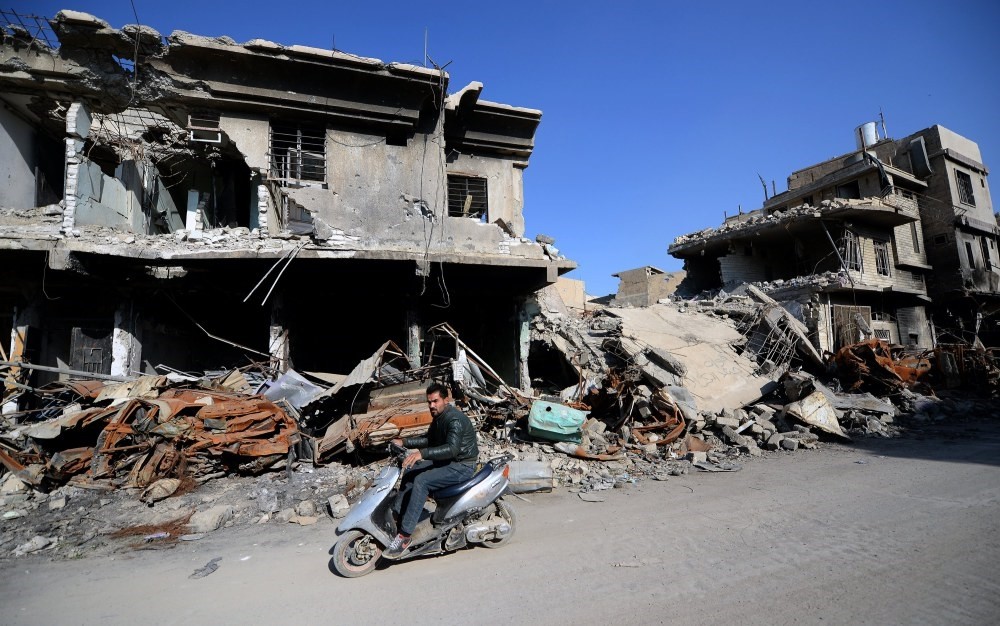 A man rides a scooter near destroyed buildings at the old city area in western Mosul months after the province of Nineveh was recaptured from Daesh militants.
by Daily Sabah with Reuters Feb 13, 2018 12:00 am

In an effort to help rebuild war-torn Iraq now that Daesh has been defeated in the country, the Turkish government and businesses want to assume leading roles in the redevelopment of Kirkuk, Mosul, Tal Afar, Baghdad and other cities. In accordance with this, Foreign Minister Mevlüt Çavuşoğlu, who is scheduled to attend the Kuwait International Conference for the Reconstruction of Iraq, will announce Turkey's major projects for Iraq today. Projects involving education and health for the reconstruction and development of all Daesh-afflicted cities in Iraq, especially Kirkuk, Mosul and Tal Afar, will be presented at the conference.

Turkey will help redevelop the cities of Kirkuk, Mosul, Tal Afar, Baghdad, Irbil and Sulaymaniyah through the Turkish International Cooperation and Development Agency (TİKA) to help Iraqis return to their homes. During the conference, Çavuşoğlu is expected to announce major infrastructure projects such as hospitals, schools and housing. The minister will also explain efforts that Turkey has made so far for the stability and welfare of Iraq and the steps it plans to take moving forward. He will also hold bilateral meetings at the conference.

As a result of the implementation of projects Turkey will propose, many Iraqis will have jobs and be able to return home. According to the report, "Iraq: Reconstruction and Investment," released by Kuwait's Chamber of Commerce and Industry in January, more than 200 projects in 10 sectors, including education, health, transportation and agriculture, are ready to receive financing.

Donors and investors have gathered in Kuwait this week to discuss efforts to rebuild Iraq's economy and infrastructure as it emerges from a devastating conflict with the hardline Daesh militants who seized almost one-third of the country.

About $22 billion will be required in the near future and another $66 billion later, the director-general of the country's Planning Ministry, Qusay Abdulfattah, told the conference, without indicating a time frame.

"Rebuilding Iraq is restoring hope to Iraq, and restoring the stability of Iraq is stabilizing the states of the region and the world," Planning Minister Salman al-Jumaili said.

Iraq published a list of 157 projects for which it is seeking private investments at the conference, which some 1,900 delegates representing foreign governments, private firms and nongovernment organizations have registered to attend.

The projects include rebuilding destroyed facilities, such as Mosul International Airport, and new investments to diversify the economy away from oil by developing transportation, agriculture and industries based on the country's energy wealth, including petrochemicals and oil refineries.

Rebuilding homes, hospitals, schools, roads, businesses and telecommunications will be the keys to providing jobs, ending the displacement of hundreds of thousands of people and putting an end to decades of political and sectarian violence.

Around 138,000 housing units have been damaged and half of them completely destroyed, Mustafa al-Hiti, who runs Iraq's Reconstruction Fund of Areas Affected by Terroristic Operations, told the conference.

Baghdad has said it is determined to tackle the red tape and corruption that hamper investment. Iraq is the 10th most corrupt country in the world, according to Transparency International.

Iraq reopened to foreign investment after the 2003 U.S. invasion, but the vast majority of the billions of dollars invested went to increasing its oil and natural gas production.