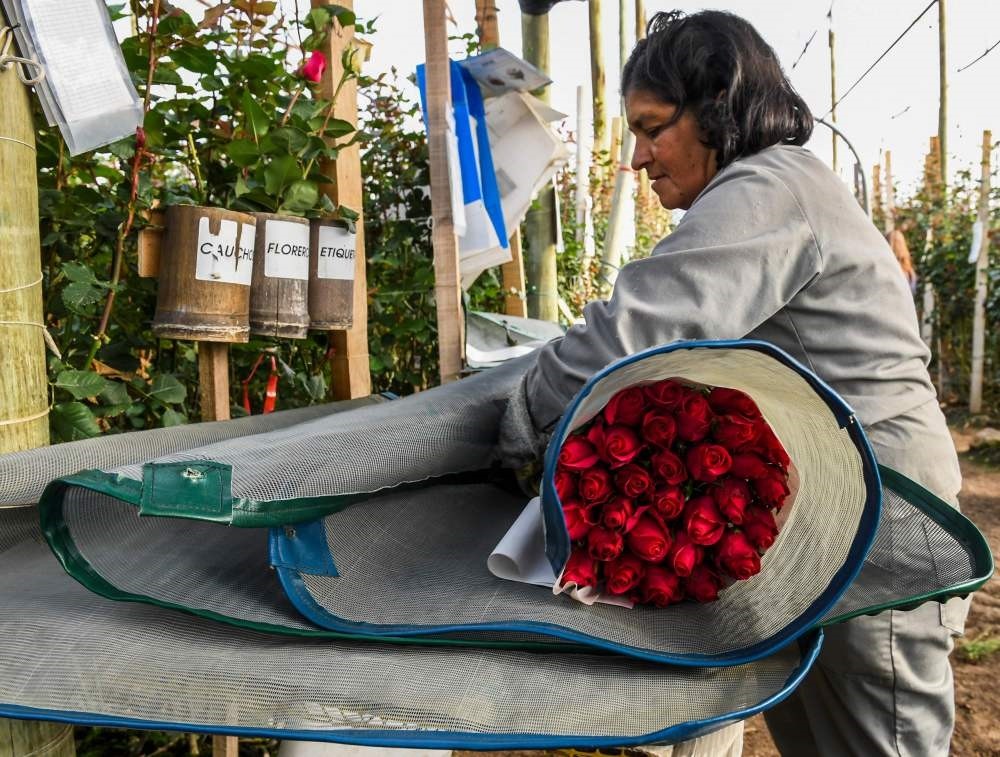 A worker selects pink roses to be packed ahead of Valentine's Day at a flower farm in Tabio, Colombia.
by French Press Agency - AFP Feb 13, 2018 12:00 am

Valentine's Day creates opportunities in Colombia, one of the world's largest flower exporters that accounts for 74 percent of U.S. flower imports, as it provides jobs for the unemployed

Valentine's Day is a crazy rush for Colombia, one of the biggest flower exporters in the world, resulting in huge demand for labor in greenhouses near Bogota.

That's how Rubiela Mendez and William Perez found themselves shivering in a cold they'd never known, preparing roses in a hangar 500 kilometers (300 miles) from their hometown of Cucuta, on the jungle-steamy eastern border with Venezuela.

They are among hundreds of Colombians and Venezuelans brought in on buses - a 12-hour trip over not-so-great roads - to ready the fragrant flowers for shipment to the United States.

Valentine's Day on Feb. 14 is one of the times of the year Americans spend the most on gifts. That means a bonanza for Colombia, which is the source of 74 percent of U.S. flower imports. Last year, between January and November, Colombia's flower industry earned $1.3 billion.

Those working to prepare the roses see only the minimum wage - $300 a month - but for Mendez and Perez and laborers like them from the border, that's far better than what they had been earning.

Although Colombia has a nationwide unemployment rate of 10 percent, joblessness in Cucuta is significantly higher, reaching 16 percent last year.

Mendez said the situation has worsened in past months with Venezuelans who are fleeing economic despair in the country coming over the border to work for half the rate paid to Colombians in the town.

"The situation in Cucuta is very difficult. No one wants to go back there because there's no work," the 26-year-old said, before adding: "But me, I have to return, because my little girl is there."

This work stint in Tabio, a town just north of Bogota, was the first time she had been separated from her 4-year-old daughter.

The task involves taking cut roses and scrupulously maintaining the "cold chain" - a supply chain that ensures the flowers are kept at very low temperatures in storage and transport so they still appear fresh when sold in shops.

Mendez and other workers gather and package bouquets of a dozen roses in spaces refrigerated to 10 degrees (50 degrees Fahrenheit), while listening to tropical music on the radio.

They sleep in heated shipping containers, and are fed by the horticultural companies employing them.

Despite the basic conditions, the money is better than what Mendez pocketed back in Cucuta. There, after losing a $7-a-day restaurant job, she barely made ends meet by selling contraband jerrycans of cheap Venezuelan gasoline.

Her employer, Sunshine Bouquet, had initially sent recruiters to the border thinking it could hire Venezuelan migrants willing to handle the roses. Instead it found a desperate and willing Colombian work force.

That's how it came to be, in mid-January, that it transported in 600 people, 80 percent of them Colombians, to its production center.

In Cucuta, "there are people suffering, and who very much want to work," said the company boss, Felipe Gomez.

Perez, a 24-year-old Colombian, was relieved when he was chosen. He had spent seven years in Venezuela, and had returned home as the crisis there obliterated previous oil-buoyed prosperity.

"There is fear, horrible despair" in Venezuela now, he said, describing rampant public safety woes and lack of food.

The outflow of people from Venezuela is reversing a trend that had once seen Colombians heading to their neighbor to escape a half-century conflict between their government and Marxist FARC rebels.

Today, the FARC has disarmed and transformed into a political party. And Venezuela has become destitute, prey to hyperinflation.

Colombian officials say more than 550,000 Venezuelans have crossed the border, legally or illegally, and the number is expected to double by June. But the outflow is even greater, once repatriating Colombians are taken into account.

According to Ivan Daniel Jaramillo, at a labor observatory in Bogota's Del Rosario University, unemployment in Cucuta spiked "because it is a border zone receiving this migratory pressure."

The rose business in Tabio, as seasonal as it is, doesn't represent a longterm solution for the 600 laborers brought in. But it is a temporary fix that has given them some respite.

Many hope to be taken on as full time employees by the company, which has promised to hire 20 percent after the Valentine's Day rush is over, or to find some other opportunity.

"If I don't get to stay, I'd like to try Bogota and start a new life," said Perez, grinning among the flowers.