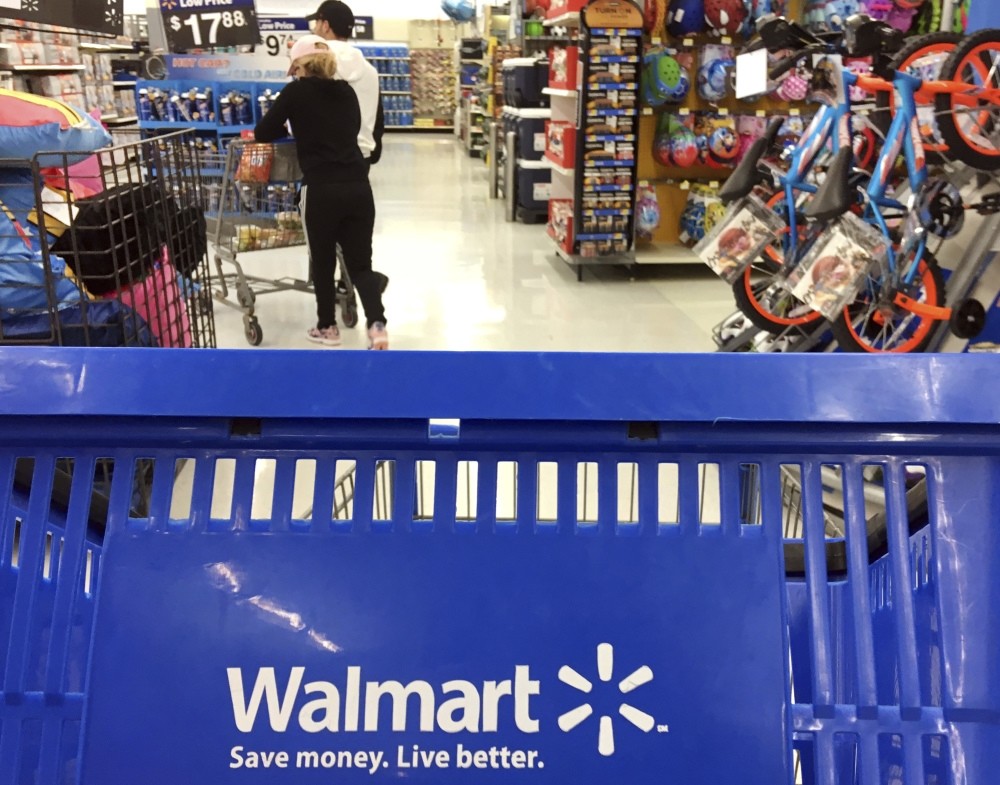 Customers shop for food at Walmart in Salem, N.H. Walmart says it reviewed its firearm sales policy in light of the mass shooting at a high school in Parkland, Florida.
by Associated Press Mar 02, 2018 12:00 am

Walmart will no longer sell firearms and ammunition to people under 21. The move comes after Dick's Sporting Goods announced earlier that it would restrict firearm sales by the younger age limit

The rift between corporate America and the gun lobby is growing. Retail heavyweights Walmart and Dick's Sporting Goods have taken steps to restrict gun sales. That follows moves by several other major corporations, including MetLife, Hertz and Delta Air Lines, that have cut ties with National Rifle Association following last month's school massacre in Florida. Dick's said Wednesday it will immediately stop selling assault-style rifles and ban the sale of all guns to anyone under 21. Its CEO took on the NRA by demanding tougher gun laws. Walmart, the nation's largest retailer, followed by saying it will no longer sell firearms and ammunition to people younger than 21. It had stopped selling AR-15s and other semi-automatic weapons in 2015. The announcements from the major national retailers came as students at Marjory Stoneman Douglas High School in Parkland, Florida, returned to class for the first time since a teenager killed 17 students and educators with an AR-15 rifle two weeks ago.

"When we saw what the kids were going through and the grief of the parents and the kids who were killed in Parkland, we felt we needed to do something," Dick's Chairman and CEO Ed Stack said on ABC's "Good Morning America."

The announcements from Dick's and Walmart drew hundreds of thousands of responses for and against the moves on the companies' social media accounts.

"This is the moment when business leaders across the country get to decide if they want to stand on the right side of history," said Shannon Watts, founder of Moms Demand Acton for Gun Sense in America. "Mothers make the majority of spending decisions for their families, and we want to shop with businesses that care about the safety of our families - making this a smart business move, too."

Sporting goods chain Bass Pro Shops, which owns Cabela's, didn't respond to requests for comment. Nor did the Outdoor Retail Association or Gander Outdoors. Dick Sporting Goods had cut off sales of assault-style weapons after the 2012 Sandy Hook Elementary School shooting. But sales had resumed at its smaller chain of Field & Stream stores, which consisted of 35 outlets in 16 states as of October. On Wednesday, Stack said that would end, and he called on lawmakers to act now. He urged them to ban assault-style firearms, bump stocks and high-capacity magazines and raise the minimum age to buy firearms to 21. He said universal background checks should be required, and there should be a complete database of those banned from buying firearms. He also called for the closing of the private sale and gun show loophole that enables purchasers to escape background checks.

"We support and respect the Second Amendment, and we recognize and appreciate that the vast majority of gun owners in this country are responsible, law-abiding citizens," Stack said in a letter. "But we have to help solve the problem that's in front of us. Gun violence is an epidemic that's taking the lives of too many people, including the brightest hope for the future of America - our kids."

One industry analyst said that other retailers that devote a small percentage of their business to hunting will probably follow suit. While guns can be bought from sporting goods stores or department stores, they can also be purchased online, at gun shows and from small local gun stores.