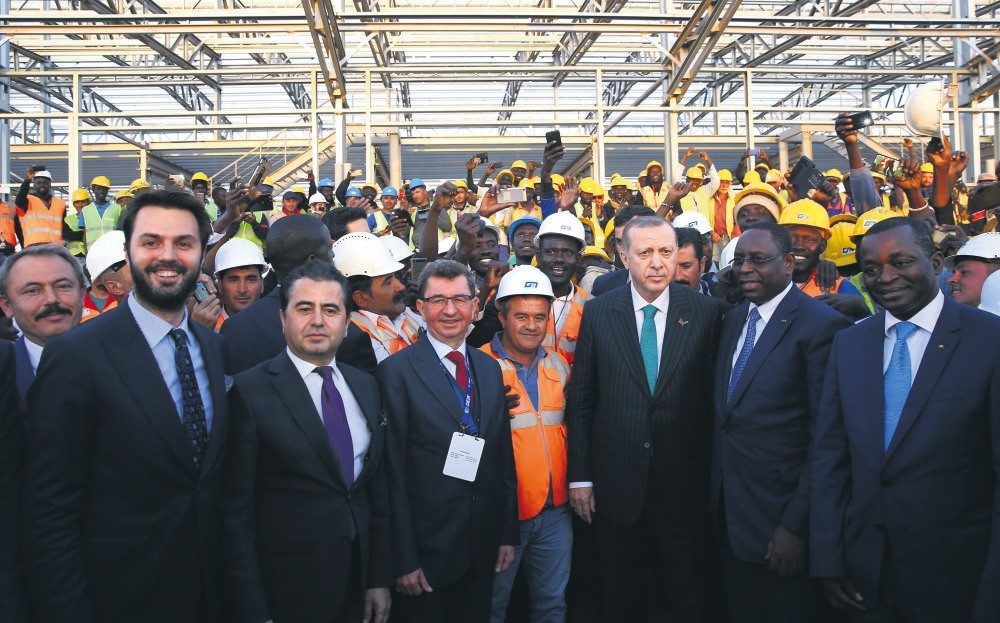 Another trip to Africa by President Erdoğan once again emphasized Turkey's dedication in sustaining economic ties with the continent, and the various economic and commercial agreements made during the president's visit will undoubtedly be lucrative for both Turkish and African partners

In the last decade, Turkey's economic rapport with Africa has enjoyed a significant evolution with growing trade and investments, which are helping develop the deprived continent.

Over the course of this period, President Recep Tayyip Erdoğan's visited 28 western and eastern African nations over 30 times.

On each trip, he was accompanied by large delegations of Turkish business people and this has certainly demonstrated Turkey's political will to utilize the full potential of economic partnership with African nations.

The essential philosophy of this partnership has always been emphasized to be established on a win-win approach, which does not rely on unilateral benefits.

The president's latest tour once again proved Turkey's commitment to sustain its commercial and economic ties with the African continent.

A number of agreements in trade, agriculture and energy were signed during Erdoğan's five-day trip, which covered Algeria, Mauritania, Senegal and Mali.

As a concrete result of Turkey's Africa Initiative, the country's trade volume with the continental countries increased by six-fold in the last 15 years, reaching $17.5 billion. While Turkish direct investments in Africa were $100 million in 2003, they reached $6.5 billion in 2017.

Turkey's contact with the continent of Africa came after almost 90 years following the fall of the last Ottoman territory in the continent in 1912.

In 1998, the approval of the Africa Action Plan aimed to expand bilateral trade volume and economic relations. But it was the year of 2005 when Turkey officially launched an initiative for Africa and prepared the Strategy for the Development of Relations with African nations.

Moreover, after holding the first Turkey-Africa Cooperation Summit in 2008, the relations were sealed as a partnership under the Turkey-Africa Partnership and a new phase was launched in 2010.

Particularly since the declaration of the importance of Africa, high-level visits between Turkey and African nations gained momentum and the number of Turkish embassies in the continent rose to 41 from 12 in 2009.

In a context of increasingly emphasized Turkish commitment to Africa, President Erdoğan's most recent visit delivered concrete results while laying the ground for many other prospective projects.

Erdoğan's first stop, Algeria, witnessed the dedication to expediting the process to achieve greater bilateral trade, which currently stands at around $3.5 billion.

In order to raise existing trade volume to $5 billion in the short term and then to $10 billion in the longer term, the two countries signed an energy deal during the Turkey-Algerian Business Forum.

In a speech at the business forum, Erdoğan reiterated the Turkish government's support for businesspeople who want to invest in infrastructure, energy and agriculture projects in Algeria and Africa.

Algeria's state-run energy and chemicals company Sonatrach and two leading Turkish firms, Rönesans and Bayegan, signed a deal for a $1 billion petrochemical investment in the Yumurtalık free economic zone, in the southern Turkish province Adana. The plant will produce 450,000 tons of polypropylene per year and the raw material will be imported from Algeria.

On the second leg his tour, Erdoğan took a one-day stop in Mauritania, making it the first time a Turkish president visited the country.

As part of his visit, the Turkish president held private meetings with President Mohamed Ould Abdel Aziz and attended a business forum.

The two countries signed seven agreements in agricultural, energy, fisheries and tourism cooperation as well as an agreement on the mutual protection and encouragement of investments besides diplomatic and political agreements.

With the objective of developing commercial relations between the two countries, the Joint Economic Commi

ssion mechanism and the Turkey-Mauritania Business Council were established. As a result, the volume of mutual trade increased from $22 billion in 2008 to $131.9 million in 10 years.

Turkey's Kolin Construction signed a deal with the Senegalese General Directorate of Highways for construction of a road which costs nearly $492 million. Another Turkish firm Alpler Agricultural Machinery inked a $74-million deal with Senegal's National Merchants and Industrial Union.

In addition, the Force Group sealed a metro station construction project in the Senegalese capital Dakar for $17.25 million.

Kolin Construction's top executive Devrim Koloğlu they had previously constructed a 100-kilometer (62-mile) road in Uganda and had since then been interested in the Senegalese market.

"President Erdoğan is giving us a major support, boosting our morale and helping us overcome obstacles," he said.

Serkan Aktaş, general manager of Alpler Agricultural Machinery, said the deal his firm signed includes establishment of assembly lines for agriculture machines in 14 Senegalese cities and warehouses for their storage.

Aktaş said that they regard Senegal as a hub in West Africa.

"We are operating in at least 30 countries in Africa. Our annual export to Africa is almost 30 million euros," he said, adding that the latest project in Senegal is their second largest. Their previous project in Sudan tallied 120 million euros.

Aktaş added that they aim to introduce modern agricultural techniques used in Turkey to African countries.

"In the next five years we want to modernize agriculture in Nigeria, Ivory Coast and Ghana with these machines," he said. Force Group's board member Gökhan Uygun said that their investments in Senegal will increase.

"Our goal is to invest in high-volume projects in Senegal," Uygun said, adding that his company had been doing business in Africa since 2001.

The last stop on the president's trip to West African nations was Mali on Friday. The president and his delegation, including 200 Turkish businesspeople, were expected to discuss cooperative and investment opportunities with Malian government officials and businesspeople in agriculture, energy and infrastructure.

The president's visit to the country raised expectations as it will pave the way for Turkish investors.

Over a decade, the trade volume between Turkey and Mali rose eight-fold to reach $82.1 million in 2017, according to Turkish Statistical Institute (TurkStat) data.