China to take actions if US harms trade relations 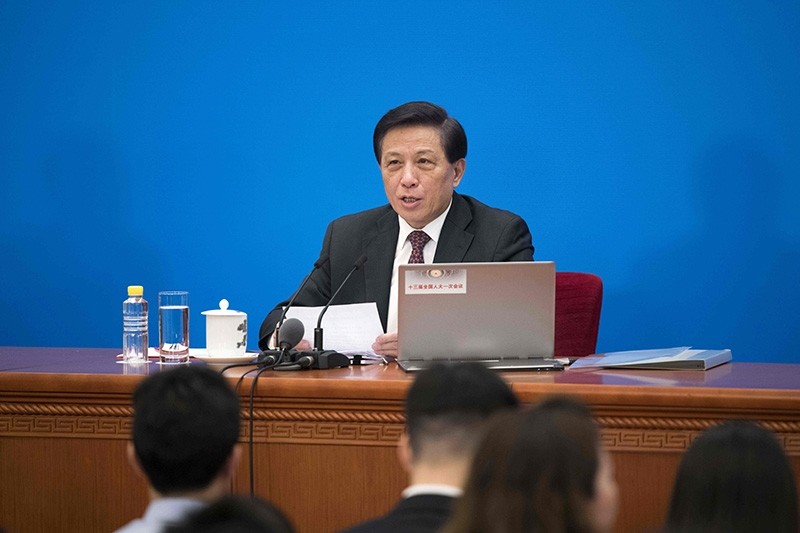 Zhang Yesui, the spokesperson of China's National People's Congress, holds a press conference at the Great Hall of the People in Beijing on March 4, 2018 (AFP Photo)
by Mar 04, 2018 12:00 am

China warned Sunday that it was ready to hit back if the United States damaged its economic interests, fuelling fears of a trade war after President Donald Trump unveiled tariffs on steel and aluminum.

Trump's announcement on Thursday sparked a flurry of counter-threats from other nations. But Washington's main trade rival had avoided any overt warnings of potential retaliation until now.

"China doesn't want a trade war with the United States," Zhang Yesui, spokesman for the National People's Congress, told a news conference on Sunday, the eve of the rubber-stamp parliament's annual session.

"But if the U.S. takes actions that hurt Chinese interests, China will not sit idly by," Zhang said. An official English-language interpreter added the phrase, "and will take necessary measures."

Zhang warned that "policies informed by misjudgment or wrong perceptions will hurt relations and bring consequences no side wants to see."

During his visit, according to the official Xinhua news agency, Liu and his hosts "agreed that the two countries should settle their trade disputes by cooperation rather than confrontation".

Since announcing plans to impose a 25 percent tariff on steel imports and 10 percent on aluminum, Trump has shrugged off threats from other nations, boasting on Friday that "trade wars are good and easy to win".

China has been the main target of Trump's anger over the US trade deficit since his presidential campaign, but its steel and aluminum exports to the United States are minimal.

While China is the world's largest steel producer, it accounts for less than one percent of U.S. imports and sells only 10 percent of its wrought aluminum abroad.

"The American action to put sanctions on other countries' reasonable steel and aluminum exports in the name of harming national security is groundless," Chinese Foreign Minister Wang Yi said on Saturday.

Some U.S. allies, like Canada and Australia, had hoped to be spared the tariffs. A major South Korean business lobby, the Federation of Korean Industries, said Sunday it sent letters to US Congress members and officials seeking an exemption.

A U.S. official said Friday possible exemptions to the measures would be considered on a case-by-case basis.

Australia warned that a trade conflict could put the brakes on global economic growth.

"That's what concerns me, if we continue to see an escalation of rhetoric and, ultimately, action around tariffs applying for imports and exports across multiple economies... this will lead to a slowdown in growth," trade minister Steve Ciobo told Sky News Australia Sunday.

Trump ratcheted up the rhetoric on Saturday, threatening a tax on cars from the European Union if it takes retaliatory measures.

On Friday European Commission chief Jean-Claude Juncker said the EU was drawing up measures against leading US brands such as Levi's and Harley-Davidson.