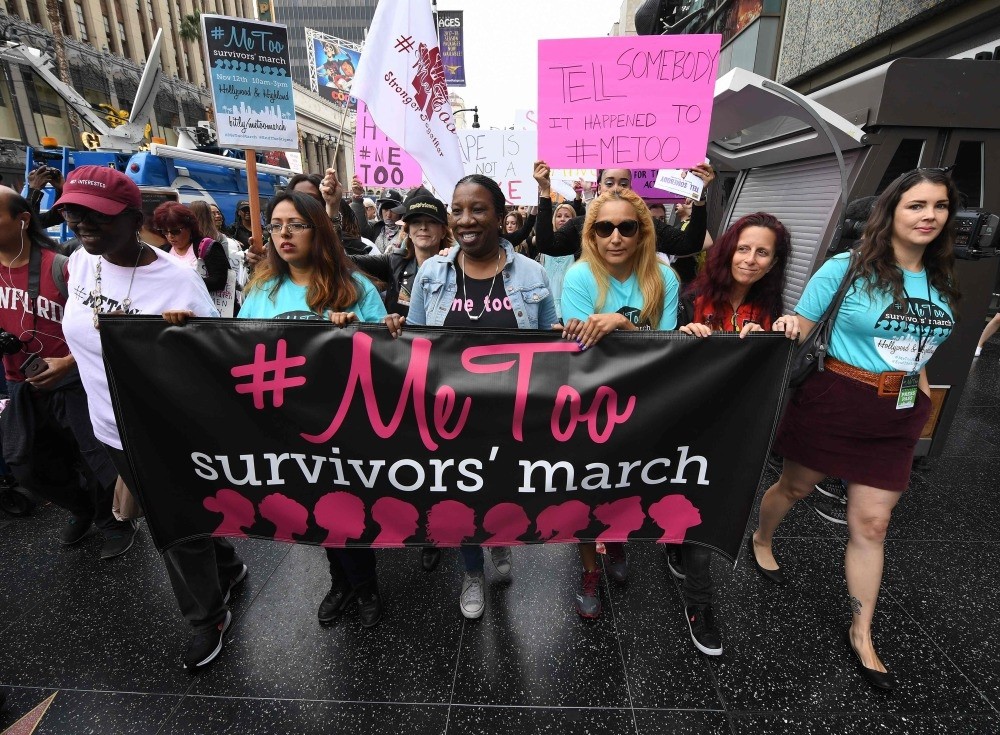 Women survivors of sexual harassment and their supporters protest during a #MeToo march in Hollywood, California.
by Mar 08, 2018 12:00 am

The female-led investor group that had agreed to buy The Weinstein Company's assets pulled its offer on Tuesday, and lead investor Maria Contreras-Sweet said the decision was made after the group "received disappointing information." Two sources familiar with the matter told Reuters that the investor group pulled the offer after discovering the Hollywood studio's liabilities were higher than previously disclosed. The Weinstein Company board said it would keep working to "determine if they are any viable options outside of bankruptcy." Contreras-Sweet, a former Obama administration official, said she still believed in the vision of a studio led by women and will consider buying assets if they become available in bankruptcy court. More than 70 women accused The Weinstein Company co-founder Harvey Weinstein, who was one of Hollywood's most influential men, of sexual misconduct, including rape.

Weinstein has denied having non-consensual sex with anyone. The Weinstein Company, which fired Harvey Weinstein in October, had been planning to file for bankruptcy when Contreras-Sweet struck the deal last week. The investors found that the company's debt was $280 million rather than the $225 million previously disclosed, one of the sources told Reuters. A second person said that there were previously undisclosed obligations for royalties and other outstanding work payments, accounts payable and a commercial arbitration award. "After signing and entering into the confirmatory diligence phase, we have received disappointing information about the viability of completing this transaction," Contreras-Sweet said in the statement.

"We will consider acquiring assets that may become available in the event of bankruptcy proceedings, as well as other opportunities that may become available in the entertainment industry," she added. In its statement, The Weinstein Company board said the claim that investors discovered new information was an "excuse," it believed the buyer had never any intention of following through, and said the company had been transparent about its financial condition.

"We will continue to work tirelessly - as we have for months - to determine if there are any viable options outside of bankruptcy," the board said. "In the meantime, we continue to pursue an orderly bankruptcy process to maximize the company's value."

Lions Gate Entertainment Corp had made an earlier offer for some of the company's assets, as had Qatar-owned film company Miramax, which was originally founded by Harvey Weinstein and his brother Bob Weinstein. Both could be among potential bidders if assets come up for sale in bankruptcy. Contreras-Sweet, who headed the Small Business Administration under former President Barack Obama, last week said her investor group had reached an agreement, with help from the New York state attorney general's office, to buy assets from The Weinstein Company to launch a new firm with a majority-female board.

Launched in October 2005, the studio produced and distributed critically acclaimed hits including "The King's Speech" and "Silver Linings Playbook," as well as TV series such as long-running fashion reality competition "Project Runway."