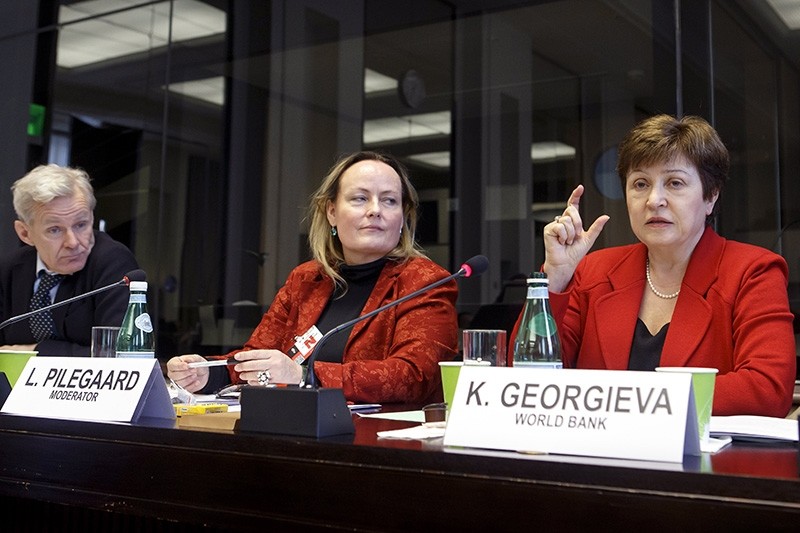 World Bank Chief Executive Officer Kristalina Georgieva (R) sitting next to Jan Egeland (L) and moderator Lisberth Pilegaard, speaks during a panel at the European headquarters of the United Nations in Geneva, Switzerland (EPA Photo)
by Mar 08, 2018 12:00 am

The chief executive of the World Bank urged U.S. President Donald Trump on Thursday to be "careful" before imposing controversial steel and aluminum tariffs, warning that they could affect global trade.

Kristalina Georgieva said Trump should "assess the implications" before going ahead with a plan that has sparked fears of a trade war with China and Europe and spooked world markets.

The Bulgarian said that her message to Trump, who is expected to sign off on the tariffs later Wednesday, was to make a "careful assessment before taking any further step."

"If you take a step for a reason then you need to project on a couple of steps for the implications," Georgieva told a small group of media outlets including AFP in Brussels. "Assess what are the implications and then advise about these implications."

The EU has vowed to retaliate against the tariffs with its own measures targeting not only US steel but also products such as bourbon whiskey, jeans, motorcycles, orange juice and cranberries.

The World Bank chief, whose organization specializes in lending money to poor countries, added that Trump should take a "carefully calibrated approach to what happens in world trade."

"When trade shrinks it has implications for the poorest populations in rich countries. The goods are more expensive and poor people spend more of their money buying these goods," she said.

Trump himself appeared to hint at carve-outs on Thursday, vowing that the tariffs which he says are aimed at saving the U.S. steel industry and cutting its deficit would show "great flexibility" to "real friends."

"There are no winners in this trade war," he said.

"The rest of the world must adapt to the situation and try to influence the U.S. administration's behavior."