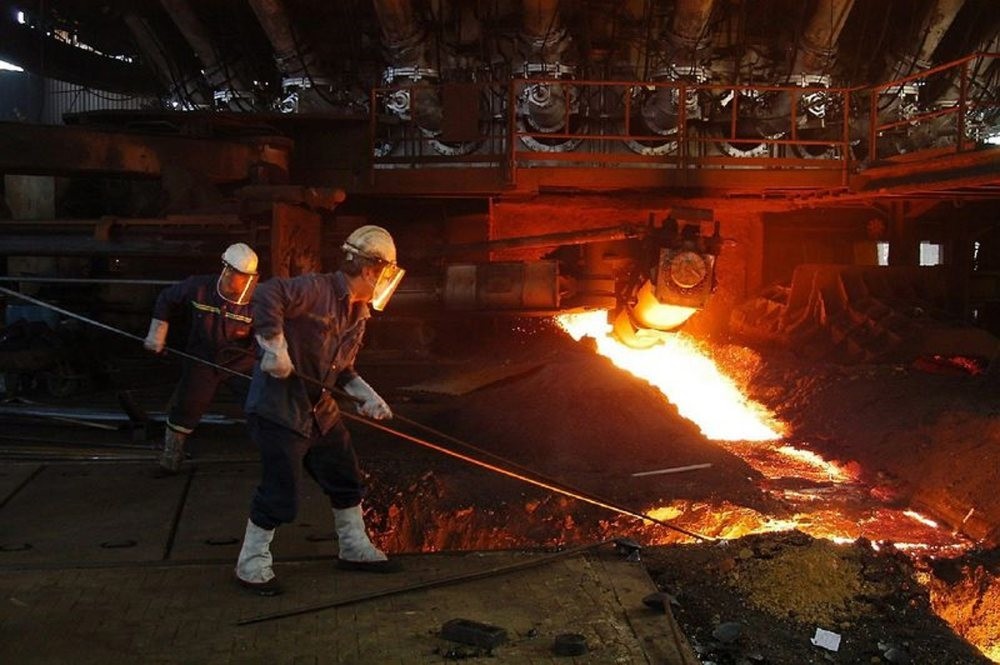 Steel Exporters' Association (u00c7u0130B) Chairman Ekinci has said Turkey deserves an exemption from the steel levy, according to the three criteria Trump cited.
by Daily Sabah Mar 16, 2018 12:00 am

Turkey's steel industry, the seventh-largest steel exporter to the U.S., said yesterday that the country has already fulfilled all requirements that U.S. has set for exemption from steel tariffs, adding it should be exempted from the 25 percent levy

By ignoring opposing voices, starting in his own office, then from around the world, U.S. President Donald Trump signed the act to impose 25 percent import tariffs of on steel and 10 percent on aluminum on March 8. The act has triggered global outrage and fears of a trade war that few had anticipated. The U.S. then exempted Canada and Mexico and offered the possibility of excluding other allies, backtracking from an earlier "no exceptions" stance.

Steel Exporters' Association (ÇİB) Chairman Namık Ekinci said according to the three criteria pointed out by Trump, Turkey deserves an exemption from the 25 percent tariff.

In a written statement, Ekinci said the conservative measures put into effect by Trump, while there is such a worldwide reaction, will adversely affect both world trade and the American economy.

He noted that they were facing an unfair situation in the sector from all possible aspects. "The 25 percent tax rate on steel imports, officially undersigned, is not equal and just with a side that grants privileges to certain countries and leaves the door open to some for exemption," Ekinci said. "As expected, the U.S. exempted its two neighbors Mexico and Canada from taxation during NAFTA negotiations. There are also reports of ongoing talks with Australia. Turkey's sitting at the table with the U.S. as soon as possible is of vital importance for our steel sector."

Ekinci said that for exemption from the Section 232 of the Trade Expansion Act of 1962, Trump briefly referred to three points, namely imbalance in mutual trade, steel trade with China and military spending.Pointing out the imbalance in bilateral trade relations and that Turkey was the one suffering more from the deficit, Ekinci said steel imports from the U.S. reached $1.33 billion, while exports stand at $1.18 billion.

He said that with regard to the illegal export of Chinese steel products with or without treatment with the U.S. through trans-shipment, Turkey is not involved in this situation at this point because it procures steel in very small quantities from China and uses it for its own needs. He added that the raw materials of all Turkish steel products going to the U.S. come from the U.S., before being processed in Turkey and sent back. He informed that Turkey's overall steel imports from China in 2017 stood at only 700,000 tons, totaling 1.87 percent of the total production.

Ekinci highlighted that input of any unregistered material from China to Turkey was not in question and listed military spending as the last item. He suggested that some developed allied countries spend much less than the U.S. in this regard."This is not the case in Turkey. Despite its status as a developing country, the share of Turkey's military spending in its gross domestic product is relatively high compared to many developed countries," he continued, stressing that Turkey makes an important contribution to the security of NATO members in this regard.

"In summary, as the Turkish steel industry, we fulfill all the requirements that Trump has set for exemption from the tax law," Ekinci added.

Deputy Prime Minister in charge of economy Mehmet Şimşek previously stressed that Trump's rhetoric of trade wars and his latest decision on the steel tariffs have made it clear that the world is on the eve of a global trade war.

Şimşek said the U.S. was taking steps that could initiate a global trade war and it was a critical situation for the world economy.

The European Union would "form a coalition of like-minded countries and potentially take the U.S. to the World Trade Organization (WTO) court together," European Commission Vice President Jyrki Katainen said in reference to the WTO's tribunal in Geneva.

These countries could include Turkey, Japan, Canada and Mexico, he added.

Economy Minister Nihat Zeybekci earlier this month spoke with EU Trade Commissioner Cecilia Malmström on Trump's decision to implement additional customs duties on steel and aluminum imports, and the two reached a consensus that they should act together at the World Trade Organization (WTO).

Countries such as Japan, Australia, Brazil and China, which are often targeted by Trump's administration, have expressed their concerns regarding the decision.

Many organizations, ranging from the WTO to the International Monetary Fund (IMF), have also warned the Trump administration of the risks of implementing such tariffs.

Ekinci underlined that Turkey should not delay in negotiating with the U.S., stating that many countries are rumored to be carrying out aggressive lobbying campaigns for exemptions. Ekinci also said the implementation of Section 232, which was signed by Trump on the grounds of national security by granting privileges to certain countries, is against the interest of the Turkish steel industry, pointing to March 23 as the critical date ahead.

The association has done a very comprehensive study with their sector representatives regarding Section 232 and shared this work with the Ministry of Economy, Ekinci said, noting that they also submitted their request for a meeting with the minister.

"We are expecting a meeting this weekend or next week," Ekinci noted.

The ÇİB head stressed that Turkey has to move very quickly to protect the country's interests and take action immediately. "Otherwise, Turkey's exclusion from the countries exempted from the tax will close the doors to the U.S., one of our most important markets. It will be a severe blow to our steel industry," Ekinci said, adding that such a situation will mean a deficit of 2.50 million tons for Turkey.