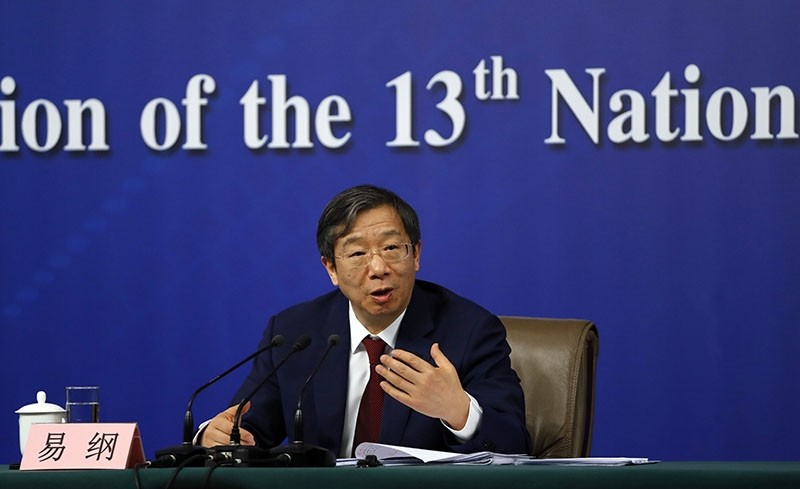 A U.S.-trained economist was appointed Monday to succeed the longtime governor of China's central bank, Zhou Xiaochuan, at a time when the ruling Communist Party is trying to reduce financial risks and surging debt.

The appointment of Yi Gang, a veteran deputy central banker, to head the People's Bank of China was in a slate of promotions approved by China's ceremonial legislature of finance and economic officials as President Xi Jinping tightens control over government.

Also Monday, the National People's Congress endorsed the elevation of Liu He, Xi's economic adviser, to a post as vice premier, where he is expected to oversee economic reform.

The ruling Communist Party is under pressure to control surging debt, defuse mounting trade tensions with Washington and Europe and make the cooling, state-dominated economy more productive. It has promised to open more industries to private and foreign competition but business groups and reform advocates complain Beijing is moving too slowly.

The NPC endorsed the appointment of Zhong Shan to a second term as commerce minister. Liu Kun was named finance minister.

Yi, 60, is well known to foreign investors and foreign regulators as head of China's foreign exchange regulator. He has overseen efforts to make the mechanism that sets the exchange rate for China's tightly controlled yuan more market-oriented.

Yi received his Ph.D. from the University of Illinois and taught at Indiana University. He also has a degree in business administration from Hamline University in Minnesota.

"Highly regarded in the international circles and seen as a pragmatic reformist, Yi Gang's appointment is set to ensure policy continuity and a smooth transition," said Mizuho Bank in a report.

Zhou, who is retiring after a record 15 years in the post, is the most prominent Chinese figure in global finance. At 70, he is well beyond official retirement age but stayed on following the 2012 handover of power to a new generation of leaders under President Xi Jinping in what was seen as an effort to reassure companies and financial markets of stability.

Beijing is trying to rein in surging debt that prompted international ratings agencies to cut its credit rating last year. The Communist Party has declared controlling financial risk a priority this year.

Zhou warned in October that rising debt could have a "severe impact" on the economy but said last week regulators believed they had debt under control.

The central bank governor's formal powers are limited despite the post's high profile. Unlike central banks of other major economies, the People's Bank doesn't make monetary policy. Instead, its mission is to carry out policy made by an official body the identity of whose members is secret.

The People's Bank is widely seen as an advocate of conventional, market-oriented economics.