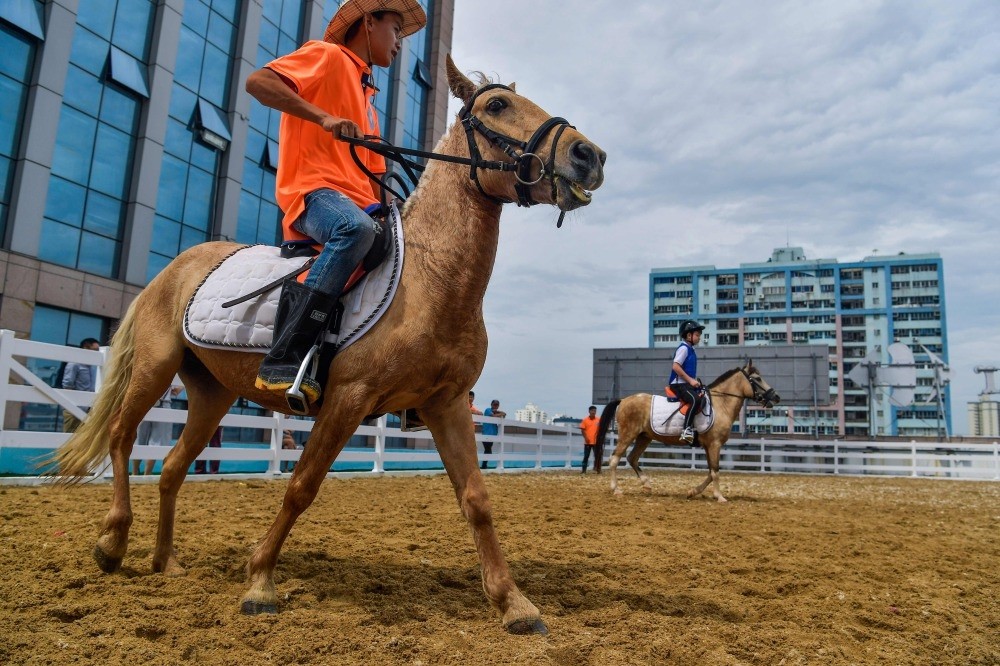 A coach teaches horseback riding on a field built on the roof top of a shopping mall in Haikou in Chinau2019s southern Hainan province.
by Apr 17, 2018 12:00 am

China is encouraging its southern island of Hainan to develop horse racing and introduce a raft of reforms as Beijing pushes the tropical tourism destination as a beacon of openness.

The province will be urged to explore opening new types of lotteries connected to sports and international competitions, according to the guiding opinion jointly issued by the Communist Party Central Committee and State Council which was published Saturday by state news agency Xinhua. It marks a change of tack for the Communist government which has long banned most forms of gambling in mainland China and comes against the backdrop of its massive campaign against corruption. But those concerns appear to be taking a back seat as Beijing looks to ramp up consumption to fuel China's economy and rebalance away from the investment and exports that have led the way for four decades. The plan aims to make Hainan, an island off China's southern coast, a "trial free trade zone" to try out the reforms Beijing has pledged to bring to the mainland for years with few tangible successes.

The outline comes days after President Xi Jinping pledged a "new phase of openness" for China at Hainan's annual Boao Forum for Asia, a Davos-like meeting of international leaders.

We will "build Hainan into an important open door for China onto the Pacific and Indian oceans," the plan says.

Sectors to open up to further foreign investment include healthcare, education, sports, communications, internet, culture and finance. Beijing also wants to to position Hainan as a "centre of international tourism consumption," a goal which has faced halting progress despite sandy beaches and massive spending on plush resorts. The province has not proven an international draw so far, attracting fewer than a million foreign visitors in 2016 - compared with over seven million in Thailand's Phuket, according to data compiled by Bloomberg News. As part of making the island green and sustainable, the reform package will push the introduction of electric vehicles and "gradually prohibit sales of gasoline-powered vehicles," Xinhua said.

Development of a gaming and tourism industry in Hainan could also create a new rival for semi-autonomous Macau, the world's largest gaming market and the only part of China where casino gambling is legal, dwarfing Las Vegas.