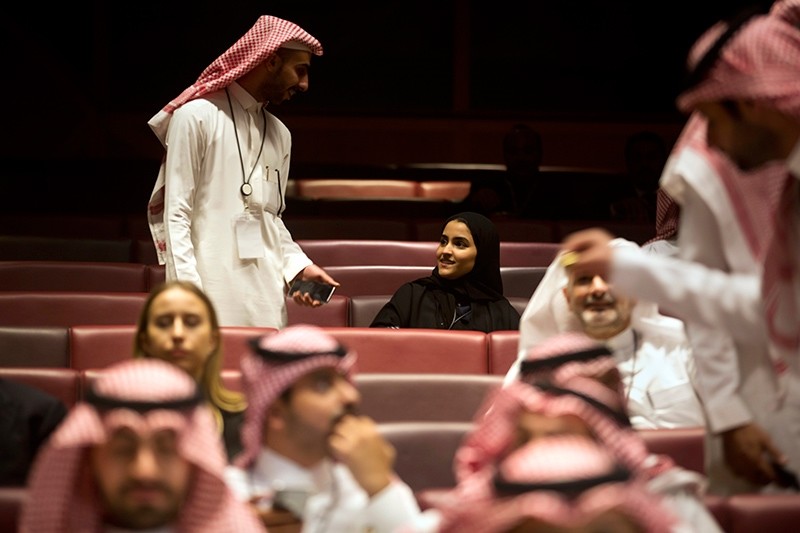 Vsitors wait for the movie to begin during an invitation-only screening, at the King Abdullah Financial District Theater, in Riyadh, Saudi Arabia, Wednesday, April 18, 2018. (AP Photo)
by reuters Apr 19, 2018 12:00 am

Vox Cinemas, owned by Dubai's Majid Al Futtaim, said on Thursday it had received a license to operate cinemas in Saudi Arabia and would open a four-screen multiplex theater in Riyadh "in the coming days."

The deeply conservative Muslim kingdom is ending a nearly 40-year ban on commercial cinemas, which were shuttered in the early 1980s under pressure from conservatives but are returning through a modernizing drive by the reform-minded crown prince.

The first theater — operated by AMC Entertainment Holdings — was launched this week, with public viewings expected to start Friday. The authorities plan to set up around 350 cinemas with over 2,500 screens by 2030, which they hope will attract nearly $1 billion in annual ticket sales.

Vox said in a statement it was investing 2 billion riyals ($533 million) in Saudi Arabia to open 600 screens in the next five years, starting at Riyadh Park Mall which will host the kingdom's first IMAX screen.

Other cinemas currently under design include Majid Al Futtaim's Mall of Saudi and City Centre Ishbiliyah. Both locations are set to open in Riyadh in the coming years.

Majid Al Futtaim will be the exclusive distributor of 20th Century Fox content to all Saudi cinemas with plans to release "The Darkest Minds," "The Predator" and "Alita Battle Angel" during 2018, the statement added.