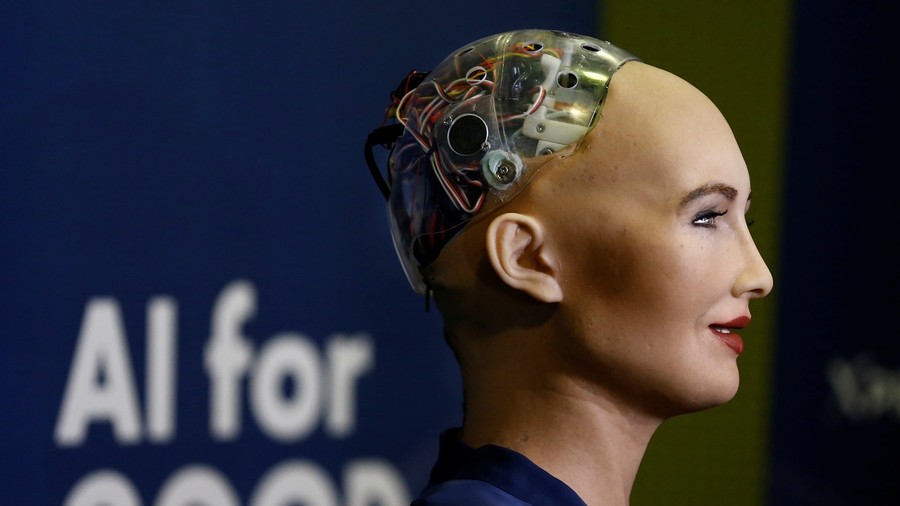 Sophia, the world's first humanoid robot with citizenship, given by Saudi Arabia. (Reuters Photo)
by Alen Lepan Apr 20, 2018 12:00 am

The world's first humanoid robot with "robot citizenship," Sophia, arrived in Istanbul yesterday to attend the 5th Marketing Meetup, which has brought together leading minds from the business world. At the event, Yakup Doğan, the deputy manager of Yapı Kredi bank, announced that Sophia will be used in the shooting of a new commercial film for the bank.

Having been elected the U.N. Development Program's (UNDP) Innovation Champion and hosted on TV programs many times, Sophia has also graced the cover of ELLE Magazine. In addition to becoming a member of the U.N. General Assembly Committee, Saudi Arabia also gave her legal citizenship.

The event, which aims to produce Turkey's most valuable contents for the business world and develop the ecosystem, was organized by integrated marketing communications blog pazarlamayson.com under main sponsor Yapı Kredi.

The event focuses on business intelligence, analytics and intellectualism and had U.N. General Assembly committee member and the world's first robot citizen, Sophia, as a guest. Developed by Hanson Robotics and the University of Las Vegas, Sophia, who has finally attained a full body with added units, responded to questions at the conference.

Sophia started her speech by saying "merhaba" - hello in Turkish - and said the main theme of the congress was experience, an important concept to her, as she put it.

"I can learn and imitate human behavior with experience thanks to the artificial intelligence I have. Many new experiences are waiting for me here today. I will experience something that is new for me in Turkey - I will act in a commercial film," she said.Sophia said she was excited about the session with Doğan, and Serdar Kuzuloğlu and also celebrating April 23, National Sovereignty and Children's Day.

Explaining that Marketing Meetup focuses on business intelligence, analytics and intellectualism, Murat said that it aims to bring the digital world together with the technology and marketing worlds.

Sophia is one of the most important examples serving this purpose, Murat said.

Doğan, who announced that Sophia will take part in a new commercial film for a new Yapı Kredi product along with the bank's advertising faces Gary and Metin, played by two famous Turkish comedians, said: "I believe this trio will win everyone's recognition. We think Turkey will see Sophia much more in the future."

Sophia was developed by David Hanson and his team in Hong Kong. Explaining that she is more important than just a piece of technology, Sophia says she wants to live with people, serve humanity, help old people and teach children. Sophia is able to express many human emotions with facial expressions and can also learn the emotions behind these expressions with her artificial intelligence.