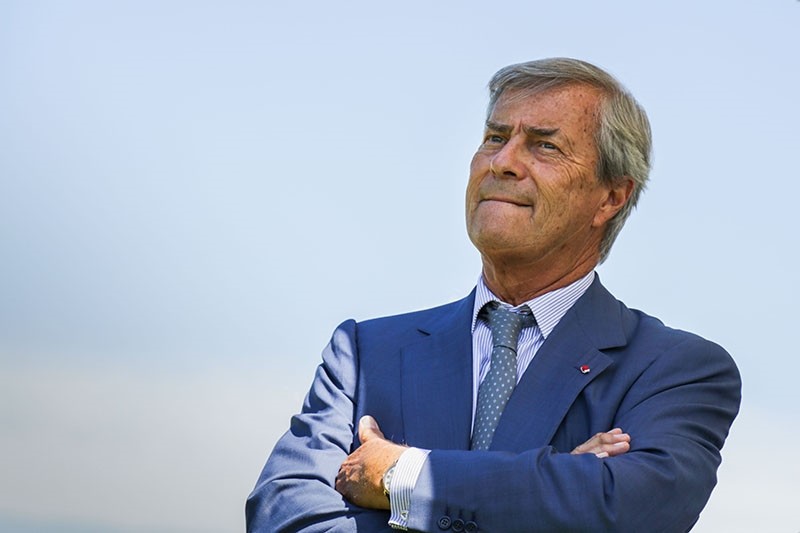 In this file photo taken on June 26, 2017, French transport and media giant Bollore's President Vincent Bollore attends the presentation of the Bretagne Prize literary award in Paris. (AFP Photo)
by Compiled from Wire Services Apr 24, 2018 12:00 am

Billionaire French tycoon Vincent Bollore was detained Tuesday as part of a corruption investigation involving his group's acquisition of contracts to operate ports in West Africa.

The 66-year-old head of the Bollore Group, was taken into custody in the Paris suburb of Nanterre for questioning about how the group obtained contracts to run Lome port in Togo and Conakry port in Guinea, according to local media reports.

The group, which has interests in construction, logistics, media, advertising and shipping, said it "formally denied" any wrongdoing in its African operations.

Its director general, Gilles Alix, and the manager of the international division of its communications subsidiary Havas, Jean-Philippe Dorent, were also taken into custody, a judicial source added.

Reacting to news reports of the French probe, the Guinean government said that Bollore's concession to build a container port in the capital Conakry was in strict compliance with the law.

"The port concession obtained by Bollore in Guinea was in strict compliance with the laws in force," Damantang Albert Camara told Reuters by telephone.

The news that the magnate was being questioned caused Bollore stocks to tumble over 8 percent in Paris trading.

Investigators are probing allegations that the tentacular group, which has interests in construction, logistics, media, advertising and shipping, corrupted public officials to clinch the Lome port deal in 2010 as well as the Conakry deal in 2011.

The group's African logistics arm has several port and rail concessions in Africa.

A senior source in the Conde's office, who declined to be named because he was not authorized to speak, said Tuesday: "we are not concerned by these allegations, which make no sense."

In 2016, police searched the Bollore Group's headquarters in the Paris suburb of Puteaux.

The investigation stems from a probe into the connections of Francis Perez, the president of the Pefaco group, which operates hotels and casinos in Africa.

Perez has been linked to Dorent, who was in charge of Conde's 2010 election campaign.

Months after he became his country's first freely elected president Conde summarily terminated the contract of Conakry port's operator -- a subsidiary of French shipping company NCT Necotrans -- and gave it to rival Bollore.

A French court in 2013 ordered the Bollore Group to pay Necotrans 2 million euros ($2.4 million) in compensation for its lost investment in the port but cleared it of having a hand in the president's decision.

Dorent also worked on the communications strategy of Gnassingbe, who succeeded his father Gnassingbe Eyadema upon his death in 2005.

After Gnassingbe's reelection to a second term in 2010, the Bollore Group won the 35-year Lome port contract -- a decision also challenged by a rival.