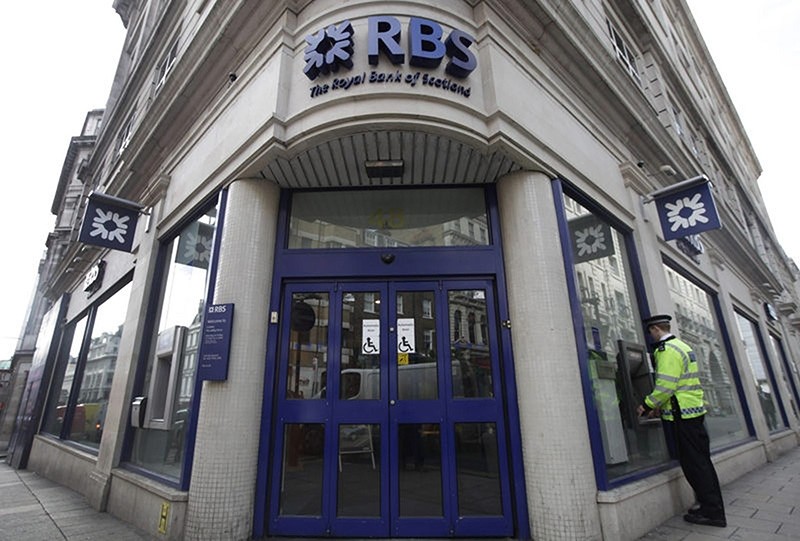 A British police officer uses the cash machine at a Royal Bank of Scotland (RBS) branch in central London (AP File Photo)
by May 02, 2018 12:00 am

State-backed Royal Bank of Scotland is to cut around 792 jobs and shutter 162 branches following a review of its network in England and Wales, prompting criticism from customers and one of the unions representing the bank's staff.

RBS said the redundancies and closures were necessary because many of its branches were too close to one another - within 0.6 and 2.5 miles - and because changing consumer habits have caused a drop in footfall.

"We realize this is difficult news for our colleagues and we are doing everything we can to support those affected. We will ensure compulsory redundancies are kept to an absolute minimum," the bank said in a statement on Tuesday.

The two banks have cut around 3,600 jobs since December to cut costs and also as they move business online amid rising demand for fintech products and digital and mobile banking.

But many customers still visit their local branch, and some affected by the closures took to Twitter to air their complaints.

"You are closing my local branch, in fact all the branches within a 20 mile radius," said one, Mandy Baxter, in a tweet to RBS. "Please can you advise where I would pay in a cheque after the closures?"

Another customer asked via Twitter how best to close down his account as soon he would not have a branch nearby.

Union Unite criticised the planned closures and cuts, which will affect some of RBS's Williams & Glyn branches, which the bank failed to spin off in 2016.

This was part of RBS's overhaul that followed its taxpayer bailout during the financial crisis. The British government still holds a stake of more than 70 percent in the bank.

The union said close to 60 percent of Williams & Glyn branches would be closed in what Unite said represented "shambolically poor management" of the business.

"Ending years of speculation Royal Bank of Scotland has effectively turned its back on the Williams and Glyn customers and staff," National Officer Rob MacGregor said, adding the move would deprive customers of access to full banking facilities.

Chairwoman of Britain's Treasury Committee Nicky Morgan, said financial exclusion could increase as a result of RBS's decision, with vulnerable people and those in rural areas most at risk.

"If financial exclusion is increasing, the government may be required to intervene," Morgan said in a statement.

RBS's announcement to axe branches in December had already prompted fierce criticism from campaigners and lawmakers, forcing the bank to postpone some closures in Scotland.

The bank's Chief Executive Ross McEwan and four other executives are set to appear before members of the Scottish Affairs Committee next week to discuss branch closures.

The closures in England and Wales will begin with of 109 branches in late July and August 2018. The closure of another 53 branches will follow in November.