Turkish businesspeople find deals to be made in Uzbekistan, South Korea 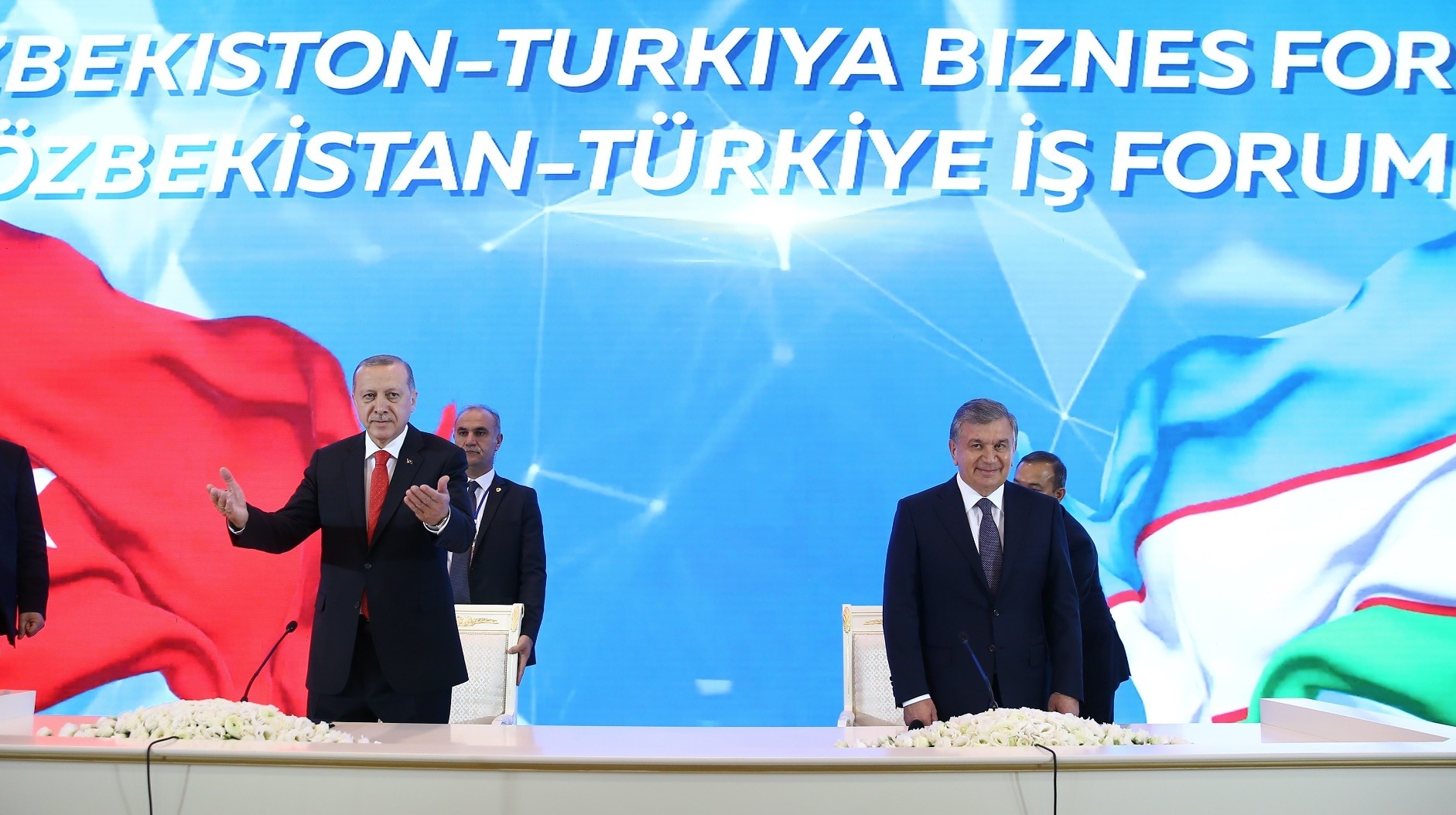 President Erdou011fan (L) and Uzbekistan President Mirziyoyev delivered speech at the Turkey-Uzbekistan Business Forum, Tashkent, April 30.
by Daily Sabah with AA May 05, 2018 12:00 am

President Erdoğan's five-day visit to Uzbekistan and South Korea, which had an expansive economic agenda, has been welcomed by the Turkish business world. Many opportunities have been put forth in both countries following a series of meetings that resulted in promising deals

President Recep Tayyip Erdoğan's five-day visit to Uzbekistan and the Republic of Korea, during which he was accompanied by a large delegation of ministers and businesspeople from various sectors, has provided a great opportunity to improve economic dialogue between the two countries and to exchange views on current and future economic partnership projects. The businesspeople who attended the five-day tour hailed the meetings for boosting bilateral trade and investments with Uzbekistan and South Korea and the various agreements signed with these two countries.

Foreign Economic Relations Board (DEİK) Chairman Nail Olpak stressed that the visit to Uzbekistan has been an important step to revive ties with the country while the visit to South Korea has highlighted balancing bilateral trade.

The bilateral trade volume between Turkey and South Korea was recorded at $7.2 billion last year according to the data of the Turkish Exporters' Assembly (TİM).

Olpak pointed out that the bilateral meetings in Uzbekistan, in addition to official state meetings, were very productive.

"When the leaders of countries are at odds with one another, it affects trade and investments. The Turkish delegation received a very warm welcome from Uzbekistan President Shavkat Mirziyoyev, indicating the close ties between the two countries," Olpak said.

Regarding the visits during the election period until June 24, the DEİK chair said important state visits should not be postponed.

"Turkey is heading to an important election. Last week, we went to Spain with a delegation that accompanied Prime Minister Binali Yıldırım. This week, we went to Uzbekistan and South Korea with President Erdoğan. If the schedule does not change, Erdoğan and Yıldırım are expected to visit Kuwait, Qatar and the U.K. next week and the following week. It is very significant for the business world that politicians do not halt all state visits until the elections because the procedures in the business world must be followed and should continue. The visits of the president and the prime minister send a vital message to the business world," he said.

Olpak also emphasized that the $5 billion target for bilateral trade with Uzbekistan is achievable.

"If Uzbekistan President Mirziyoyev's will is reflected in bureaucracy, Turkey and Uzbekistan can reach $5 billion in bilateral trade in a short period of time," he added.

"South Korea has a developed economy and the country no longer has megascale projects. During the visit, we realized that there are many great opportunities to form partnerships in third countries," he said.

Recalling that MÜSİAD opened a representative office in Uzbekistan, Kaan said: "It was a good move for us to institutionalize in the country before the visit. We inked a memorandum of understanding (MoU) with Uzbekistan Chamber of Trade and Industry, which was one of the 25 agreements signed in the country. He pledged that MÜSİAD will continue its operations in Uzbekistan in the upcoming period."

The MÜSİAD chairman said that businesspeople, who attended the visit, were really happy with the Uzbek President Mirziyoyev's warm welcome.

Kaan pointed out that Mirziyoyev showed a very friendly and accommodating attitude toward Turkish businessmen as he was determined to alleviate the bureaucracy and integrate the country with the rest of the world.

He added that increasing the number of Turkish Airlines (THY) flights to Uzbekistan will also bolster bilateral ties.

"The target to reach $3 billion in investments and $5 billion in bilateral trade is very attainable. As long as we encourage the business world to Uzbek market, more projects will follow," Kaan said.

Improving diplomatic relations between Turkey and Uzbekistan are also reflected in the trade between the two countries, which rose from about $1.4 billion in 2013 to $1.5 billion last year.

Turkey's exports to Uzbekistan surged by 21 percent in 5 years last year, reaching $680.2 million, while imports from this country reached $823.3 million in the same period with an increase of 1 percent.

Commenting on the visit to South Korea, MÜSİAD Chairman Kaan said Turkey was in a disadvantageous position against South Korea in foreign trade but the country has made a much more positive progress with a free trade agreement (FTA).

"We need diversity that will favor Turkey's interests, especially in the FTA to increase our exports to South Korea. It is an importer of especially agricultural products," he added.

In reference to Turkish and South Korean investors' collaboration in third countries, he said there are possibilities in three areas, namely energy, automotive and contracting services. Kaan said Turkey needs to seize the opportunities in various sectors, not just in the automotive and energy, by taking more sectoral people to the country.

"We need to concentrate a little more on food, agriculture and animal farming in both South Korea and Uzbekistan. We can be an exporter in South Korea, and it is possible for us to work mutually in this field with Uzbekistan," he said. As part of his visit to South Korea, Erdoğan met the top executives of SK Engineering and Construction (E&C), Hyundai Motors, Samsung, LG, Hanwha Q-cells, Daelim Industrial and GS E&C. Many of these giant companies, which hold an annual market volume totaling trillions of dollars, have serious investments in Turkey and continue to partake in the country's mega-scale projects.