Turkey to invest over $46B on railways, expand high-speed network to 41 cities: transport minister 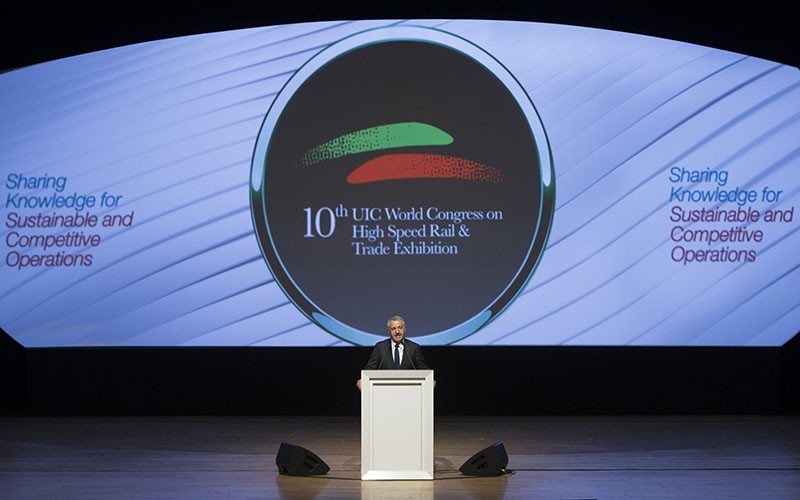 Turkey will invest €39 billion ($46.4 billion) on railways in the next five years, the transport minister said Tuesday.

Speaking at the opening ceremony of the 10th World Congress on High-Speed Rail, Ahmet Arslan said: "Our target is to transform all our lines to electrically operated and raise our productivity to the maximum level until 2023."

In the last 15 years, Turkey has invested €18.5 billion ($25 billion) on its railways, including high-speed trains, he added.

"Turkey is the second-largest country after China in railway constructions. Our target is to complete 11,700 kilometers (7,270 miles) of high-speed railway lines until 2023 and to link 41 cities to each other," said Arslan.

Isa Apaydın, director general of the Turkish State Railways (TCDD), said there are 41,000 kilometers (nearly 25,500 miles) of high-speed railway lines in the world and the figure will nearly double in the coming years.

"High-speed trains are the motor power of the Industry 4.0, they provide productivity for all areas," he said.

"These trains not only change tourism and economy, they also change people's lifestyle," he added.

The congress, organized by the UIC and TCDD under the patronage of the prime ministry, will end on Friday.

Over 1,000 high-speed rail experts from all around the world will meet in the congress themed "sharing knowledge for sustainable and competitive operations."
Last Update: May 08, 2018 3:50 pm
RELATED TOPICS