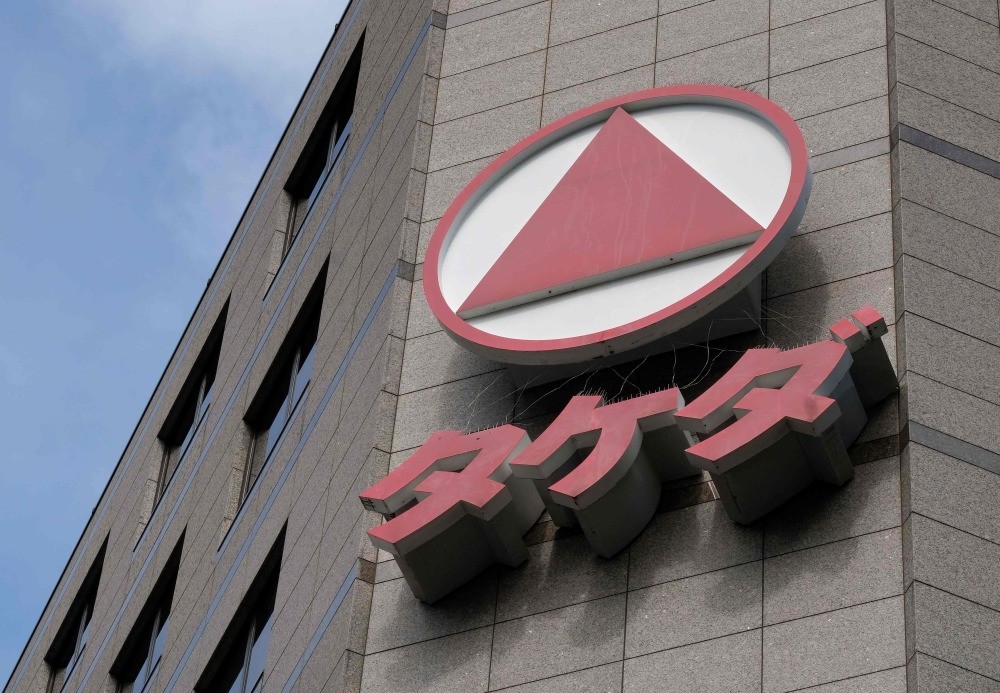 The logo of Japanese drugs maker Takeda Pharmaceutical is displayed at the company's Tokyo office.
by May 09, 2018 12:00 am

In the biggest foreign takeover ever by a Japanese firm, the deal which will create one of the world's top 10 drug companies, caps a lengthy courtship by Takeda of its larger rival as it seeks to expand overseas

Takeda Pharmaceutical agreed to buy London-listed Shire for 45.3 billion pounds ($61.50 billion) yesterday after the Japanese company raised the amount of cash in its offer to secure a recommendation. The deal - assuming it wins the backing of shareholders - will be the largest overseas acquisition by a Japanese company and propel Takeda, led by Frenchman Christophe Weber, into the top ranks of global drugmakers. The tie-up is one of the largest ever in the pharmaceuticals sector, crowning a hectic few months of deal-making as big drugmakers look to improve their pipelines by bringing in promising medicines developed by younger companies. The enlarged group will be a leader in treatments in gastroenterology, neuroscience, oncology, rare diseases and blood-derived therapies, used for serious conditions such as haemophilia. The agreement came on the last day for Takeda to make a firm bid.

Shire had rejected four previous offers, due to price concerns and the fact that the Japanese company is proposing to pay for much of the acquisition in stock. The final deal is approximately 46 percent cash and 54 percent stock, leaving Shire shareholders owning around half of the combined group. Shire investors will receive $30.33 in cash and either 0.839 new Takeda shares or 1.678 Takeda American depositary shares for each share, the companies said, valuing the offer at 48.17 pounds a share based on the latest price and exchange rate.

Jefferies analysts said they expected the shares to trade at a relatively wide discount to the offer, given the large stock component and the fact that the deal is not expected to close until the first half of 2019. Although the deal must get the support of 75 percent of Shire's voting shareholders, some of whom do not want to hold Takeda paper, Weber told reporters he believed investors would back the transaction.

Weber became Takeda's first non-Japanese CEO in 2015 and has been hunting for acquisitions to make the company more global and reduce its exposure to a mature Japanese pharmaceutical market. Buying Shire is a big financial stretch for Takeda but Weber believes it will generate substantial cash flow, enabling the enlarged group to pay down its borrowings quickly. Takeda said $30.1 billion in bridge loan financing would be replaced with a combination of long-term debt, hybrid capital and available cash ahead of completion, without providing a breakdown.

The Japanese company predicts annual cost synergies of at least $1.4 billion three years after completion and the deal is expected to boost underlying earnings significantly from the first full year after closing. Jobs will go, with the group's combined 52,000 workforce likely to be reduced by 6-7 percent. The companies have a number of commercial, research and manufacturing overlaps, particularly in the United States, where both have a large presence in Boston.

Weber argued Takeda would be able to maintain its investment grade credit rating with a target of achieving a net debt to EBITDA ratio of 2.0 times or less in the medium term. Some analysts have suggested Takeda could sell off certain Shire businesses to make the deal more manageable but Weber said gastroenterology, neuroscience, oncology, rare diseases and blood products were all important areas to be retained. There may, however, be opportunities to divest certain medicines falling outside these fields.